So, I promised to tell you all about Salzburg. And here I am, getting ready to tell. Where to begin?
This time, our New Year’s holiday was almost a week. We travelled to Salzburg on 26 December and came back on 2 January (I had to be back at work again on the 3rd. Boo hiss!).
I was overjoyed to be back in Austria again. I lived there for about 10 months in 2005/2006 and loved it! (I didn’t actually live in Salzburg, but Austria is Austria, right?). Salzburg is mostly famous for 2 things – The Sound of Music (which we attempted to ignore completely – although I did take a photo of the gazebo from the film for my mum) and Mozart, who was born there. We paid tribute to the latter by visiting the house he lived in as a teenager and going to a concert  featuring mostly pieces by Mozart (plus one by Schuhbert). We’re so very cutural 🙂

It was also nice to be back among mountains. I used to have one outside my bedroom window when I lived in Austria and it was always great opening my curtains to see it. Karlsruhe is possibly the flattest town on the planet (the highest “hill” here is in the zoo… and it’s man-made!) and England isn’t exactly known for its peaks, so  even small mountains are something I don’t see every day. While the weather was behaving, we took the cable car up the Untersberg (just outside Salzburg)  – Jan wanted to walk up but all the paths were closed due to snow so we weren’t allowed – I was devastated, clearly 😉 At the top there was quite a bit of snow, and also a wonderful view.

At midnight on the 31st, we were partway up another mountain – the Kapuzinerberg. That one’s actually in Salzburg and gave us an excellent view of the fireworks while allowing us to avoid the drinken idiots shooting rockets at each other in town.

We also went to the Museum der Moderne – a modern art museum on the Mönchsberg. They currently (January 2012) have an exhibition by Evan Penny, which I thought was neat. Unfortunately you weren’t allowed to take pictures in the museum, but basically he makes sculptures of humans and, in this particular exhibition (Re Figured) they’re all distorted in some way. The results are a little freaky but very, very cool.

Other highlights included the fortress, where there was so much to see that we didn’t even make it all the way round, and the Haus der Natur, a natural history museum with an attached Science Centre where you could literally spend all day! The only reason we left after 3 and a half hours was because Jan wasn’t feeling too good – we hadn’t seen anything like everything! The Science Center part is all hands on and mostly aimed at kids, but adults can have their fun too! If you ever find yourself in Salzburg and the weather isn’t too good definitely check out the Haus der Natur! Naturally we also had to stop at the Cafe in Hotel Sacher for a slice of Sachertorte (a kind of chocolate cake with a layer of jam in the middle), which was okay, but the best hot chocolate of the trip was definitely the one I had in Demel on Mozartplatz. So thick and creamy it was almost more like a dessert than a drink. Mmmm! And the slice of chestnut cake I had there was delicious too! 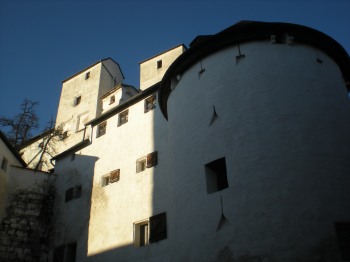 And now I shall leave you with a view of the city taken from a window at the Hohensalzburg fortress. Most of what you can see is the old town, and the river in the background is the Salzach. Still a pretty place, even in the middle of winter. Salzburg, I shall return!