I thought it was about time I did another post for my 30 German towns before 30 thing, otherwise I’m never going to get past 5 (despite the fact that I have definitely been to more than 5 places in Germany!), so I went through all my old photo albums and came up with… Worms. To pronounce it, think of the English word warm, then add an s to the end and pronounce the W as if it were a V. That comes somewhere close to the German pronunciation (it really has nothing to do with the wiggly invertebrates… that would be Wurm in German). 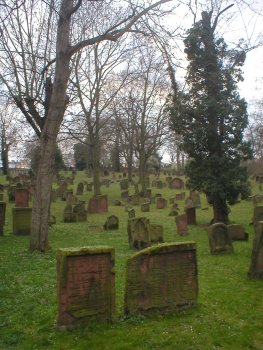 Worms is famous (well… for a given value of “famous”) for a few reasons. The first is that it has what is thought to be the oldest Jewish cemetry in situ in the world. Yes, that would be the one in the photo above. The second is due to its connections with the Nibelungenlied. For those that aren’t familiar with it, it’s a mediavel epic poem/saga – basically like a German version of Beowulf, except Beowulf kills a monster whereas the hero in the Nibelungenlied slays a dragon then bathes in its blood… as you do. Actually, while we were in Worms they had loads of dragons everywhere, sponsored by various shops and things. I’m not sure whether they had anything to do with the Nibelungenlied, but they looked pretty cool. Here’s the one sponsored by Sparkasse (a bank, hence the coin in the dragon’s back). 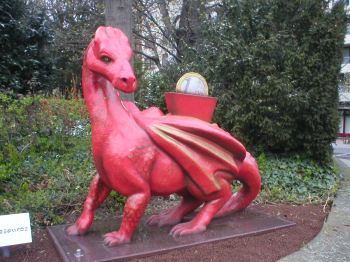 Oh, there’s another thing Worms is known for, at least if you have a clue about the Lutherean church (which I don’t). Does the Diet of Worms say anything to you? No, it has nothing to do with the eating of invertebrates (ick!) In this particular case, a Diet is an assembly, and this particular assembly was held at Worms. Hence the Diet of Worms – suddenly it all makes sense. Maybe. One thing that came out of the Diet of Worlms was the Edict of Worms, a decree by Holy Roman Emperor Charles V (later Charles I of Spain) which said “[…] we forbid anyone from this time forward to dare, either by words or by deeds, to receive, defend, sustain, or favour the said Martin Luther”. I don’t have to tell you who Martin Luther was, do I? Good, ’cause that’s enough of a history lesson for one day!

We were in Worms at Easter, which was the end of March that year (2008 in case you were wondering), so theoretically spring, but it was COLD, so we didn’t actually spend that much time walking around. Instead we went into the Nibelungen Museum, which is interesting but the audio tour takes AGES. It’s built inside the old town walls, which is cool but means it isn’t exactly warm! Here’s a not-that-brilliant photo of the town walls (these were taken with my old digital camera, which was even cheaper and lower quality than the one I have now). The bit along the top under the roof is where you walk along as part of the audio tour of the museum. 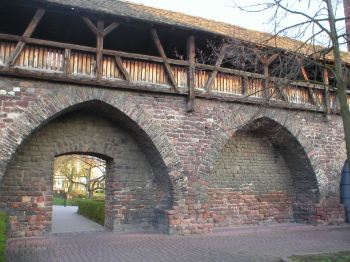 Worms is a nice little town with quite a lot of history behind it – it may even be the oldest town in Germany (Trier also lays claim to the title). We went into the town museum, which was interesting with loads of maps showing how the town has developed over the years. I would recommend choosing a slightly warmer day than we did though! Here are few more photos. I didn’t actually get that many though, what with us spending most of the time trying to hide from the cold…

7 thoughts on “Worms (not the squishy, wiggly kind)”