It’s been a while since I last wrote a post for my 30 German Towns before 30 series, and with only 3 months to go until my birthday I really need to get a move on! Today, it’s Munich’s turn.

The very first time I went to Munich was for Oktoberfest during my year abroad. Not knowing whether we would ever come back to Germany, Oktoberfest seemed like a must do. Unfortunately, I have zero photos of that day thanks to my dad’s girlfriend managing to delete ALL the photos from the first half of my year abroad from her computer. I only have those few photos that fit on my (at the time very small) memory card. My dad tried to make it up to me after the fact by buying me a memory card with room for over 1,000 pictures, but by then the damage was done. So no photos of ginormous beers, I’m afraid.

I went to Munich again in 2010 with Jan and a friend of ours, this time for a football match. We had plenty of time to walk around Munich before the football started, and this time there was no loss of photos! All the pictures in this post are from that occasion.

I’m sure most people will have heard of Munich, so I’ll keep my description of it brief. It’s the capital of and largest city in the state of Bavaria. Basically every stereotype people have of Germans (Lederhosen-wearing, huge beer-drinking, sausage eaters ring a bell?) comes from Bavaria. Almost nobody in any other state own Lederhosen (guys) or a Dirndl (girls). The part about the big beers is true for some places outside of Bavaria… but not all. Rheinland-Pfalz, for example, is more of a wine region.

Munich is a big city (population 1,378,176 in 2011!), which means a lot of traffic and a lot of people! But it is also beautiful – at least the old town is – I once had to go to the Neue Messe (exhibition centre) as part of a seminar and that area is not particularly nice!

Munich is, of course, famous for its beer (hello… it’s the home of Oktoberfest!) and there are any number of breweries and beer gardens to choose from. Here’s a photo of the Löwenbräu brewery:

The Viktualienmarkt is a daily food market and square in the centre of Munich. Apart from the usual market wares (such as fruit, vegetables and flowers) there are stands selling gourmet foods and one with freshly pressed fruit juices. Delicious! The maypole on the Viktualienmarkt features the Bavarian colours – blue and white. 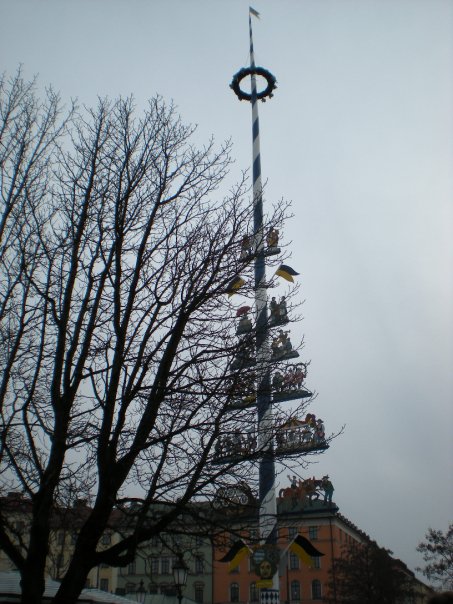 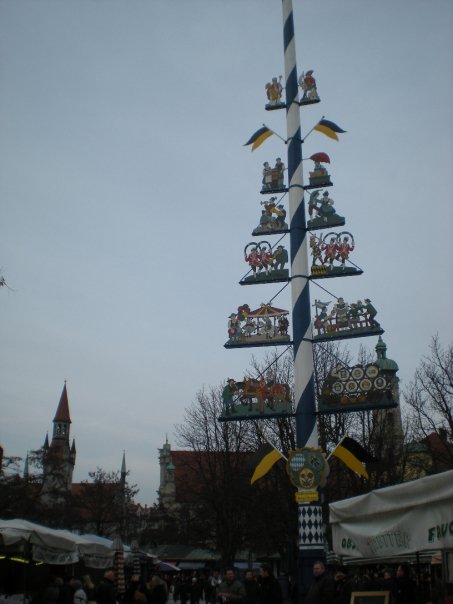 The football stadium in Munich is the Allianz Arena, home of the famous Bayern München. On that particular day, the match being played there was an international one – Germany vs. Argentina.

Apparantly, if FC Bayern München are playing, the arena is lit up in red, while for 1860 München it’s blue. As you can see, we got a sort of yellowish white colour.

I even managed to get a photo of someone from my own team – Jonás Gutiérrez, an Argentine national, plays for Newcastle United in the Premier League. He’s the one with the long hair.

With only a day to spare (and part of that being taken up with football) I didn’t get to spend as much time in Munich as I would have liked. And, of course, on Oktoberfest day I spent all my time in a tent drinking rather large beers, but what I’ve seen of Munich I liked. I definitely want to go back some day and check out all the things I missed… For example, the Englischer Garten is one of the world’s largest urban public parks and is supposed to be fantastic.

For some much better photos of Munich, check out Alex’s of Ifs, Ands and Butts post on touring Munich by bike.