Yesterday, we were invited to the post-wedding celebration barbecue of one of Jan’s colleagues (the couple actually got married almost a year ago). I was told I could bake a cake if I liked, so I decided to find something new, but fairly easy to make.

The batter was fairly easy to make. Place most of the ingredients in a bowl and stir until combind. Add the eggs and ssour cream and stir more then stir in half the blueberries, saving the other half to decorate. 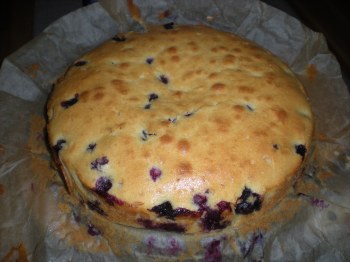 It sunk a little in the middle (should have baked it for longer!) but not too badly.

Here it is the next morning, after removal of the baking paper: 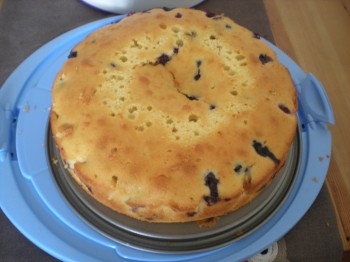 It had sunk even more and also now had a ring around it where I turned it upside down on a plate to remove the paper. Ooops! Good job there was still icing and decoration to come…

Aaah, much better! Here’s a view from the top: 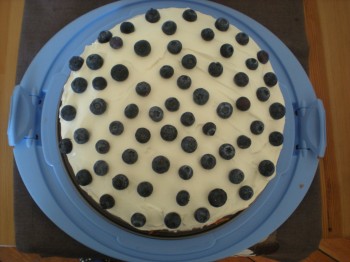 I also made brownies as a back up – I know my brownies recipe always works! I even experimented this time, mixing the plain chocolate with a little orange chocolate and adding the juice of one orange. The verdict: Delicious, but I could have added slightly more orange. Jan’s colleagues have begged me to send in brownies to work with him soon , so I’ll count that as a success!

The blueberry cake tasted good – not too sweet, and it was cooked through despite the sinking in the middle issue. It didn’t disappear as quickly as the brownies, but with two entire tables of cakes to choose from that’s not really surprising! And by the end of the party, it, too, had been demolished. Success all round! Now to decide what my next brownies experiment will be. The addition of some ginger, perhaps?…