The party Jan and I were supposed to go to in Switzerland fell through, so we spontaneously decided to go the other way instead. Jan managed to book a hotel room for the night in Garmisch-Patenkirchen in Bavaria, so after bidding farewell to my friends and their baby, that’s where we headed. We decided to take the slightly longer but more scenic route through Austria, rather than heading straight back to Germany. Here are some photos I took along the way. The first few were taken near St. Anton am Arlberg while the others are the view from the “Zugspitzblick” (Zugspitz view) carpark on the Fernpass in Austria. The flattish looking mountain is the Zugspitz and the lake is called the Blindsee. And as usual, I prove I am incapable of smiling like a normal human being on photos… I have no idea what that expression on my face is!

A river near St. Anton am Arlberg

The Zugspitze and the Blindsee

The Binnensee at the foot of the Zugspitze

Me and the Zugspitze

By the time we arrived in Garmisch-Patenkirchen, it was dark, but after driving for so long we wanted to stretch our legs so, after checking in, we went for a night time walk. The part of town we were staying in was Patenkirchen – it’s separated from the Garmisch area of town by a main road, which the lady at the hotel’s reception later jokingly referred to as “the border”. 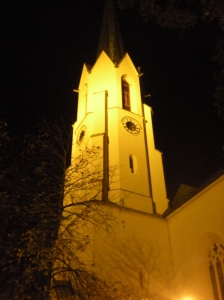 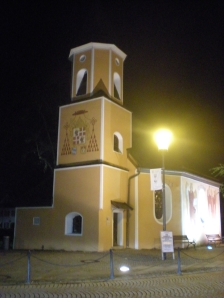 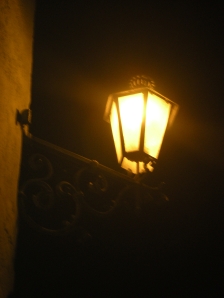 The hotel also had a restaurant, so while checking in we had asked for a table to be reserved for us. Neither of us was particularly hungry, so we chose something we though would be small… thought being the operative word her! I chose Hackbraten (a kind of meatloaf) and the slice I got covered half the plate! It was served with asparagus in Hollandaise sauce and some very buttery mashed potatoes. Basically fat, fat and more fat… and a huge chunk of meat! It was tasty though! The restaurant was busy, so later we were joined at our table by a woman and her daughter from Leipzig. We got talking and had a very enjoyable evening, before heading up to our room for a relatively early night. The furnishings in the room were very “traditional”… just check out this bed: 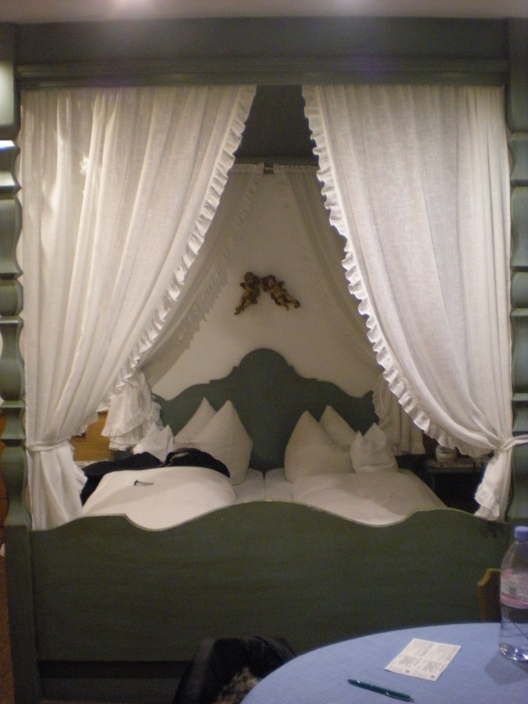 The next day (Sunday), we awoke to rain. The plan was to go up the Zugspitz, so we had breakfast, checked out and drove over to the mountain train station. Unfortunately, all the webcam views from the top of the mountain showed that there was no view whatsoever up there! Deciding going up anyway would be a waste of money (a round trip costs 50 euros per person!!), we went for a walk instead, this time in the Garmisch part of town. We were aiming for the Kurhaus, which had a Michael Ende (German children’s author) exhibition, but on arrival it turned out to be closed. It was due to open at 11 a.m., but that would have meant waiting an hour, so we headed back to the car and moved on. Before leaving town, we stopped off at the Garmisch-Patenkirchen olympic ski jump… it’s so famous that even I had heard of it!

A house in Garmisch

This building in Garmisch looks so Bavarian!

I love this cute little garden in Garmisch!

It was still raining and showing no signs of clearing, so we jumped back in the car and just starting driving. Initially, we had no goal in mind, but then we noticed we were on the Romatische Straße (Romantic Road) and I remembered that Schloss Neuschwanstein is on that route, so that’s where we decided to go…
I’m not going to tell you about that in this post, though. For that, you’ll have to wait! (Yes, I know how to drag out a weekend trip… 😉 )