I woke up early on Saturday and couldn’t get back to sleep, so I decided to take a spontaneous trip somewhere. I arrived at Karlsruhe train station with no real plan in mind, checked the board and decided to jump on a train to Bruchsal that was about to leave. Technically, I’ve been to Bruchsal before, but only to the castle so I had no idea what the town itself was like. I knew it wasn’t that big though, so I thought it would be the perfect place for wandering around by myself. In a proper city, I would only go and get myself lost! At Bruchsal train station, I had a quick look at a map, made a note of the general direction of the town centre then was on my way. Here are a few photos: 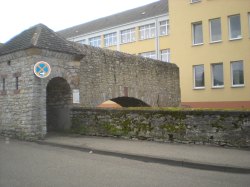 Part of the old town wall 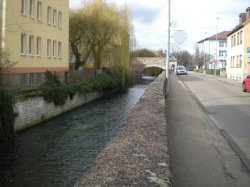 A stream running through Bruchsal

I found the pedestrian area!

An interesting coat of arms on the side of a building 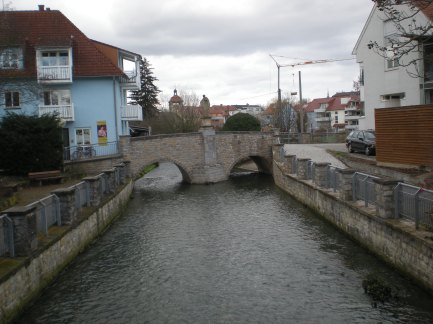 I thought this little bridge was cute

After about 45 minutes of walking around, I found myself at the castle. As I said earlier, I’ve been there before, so I didn’t go inside. There are some pretty interesting exhibits in there though – including the Deutsches Musikautomaten-Museum (German Museum of Mechanical Musical Instruments) and an exhibition showing the history of Bruchsal from the Stone Age until now . I had a quick wander around the grounds, took some photos, then headed back to the station where a train was conveniently waiting for me to jump straight on!

The castle through the trees

The front of the castle 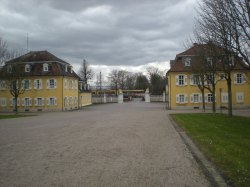 Looking towards the entrance gates 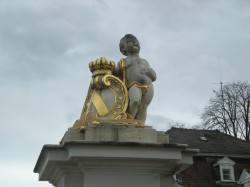 In terms of tourism, Bruchsal isn’t actually all that interesting. There are some nice looking streets and a few parks, but the main attraction really is the castle. Once you’ve seen that, there isn’t actually a great deal to do. I definitely wouldn’t come from further afield specifically to visit Bruchsal! It was good enough for my purposes though – not too far from Karlsruhe and it got me out of the house for a few hours. I didn’t want to stay out for too long in case there was any word from England, so this gave me the perfect opportunity to explore a place that I didn’t really know without going too far away from home. If you’re ever in the area with an hour or so to spare, I would certainly recommend visiting the castle.

18 thoughts on “A spontaneous trip to Bruchsal”