This isn’t exactly an earth-shattering recipe. Anybody could have made it up (in fact, lots of people probably already have.. I didn’t check, but I bet there are similar recipes all over the Internet!). It was very tasty though, and pretty quick to make. So I give you chicken and gnocchi bake. The amount below serves two. 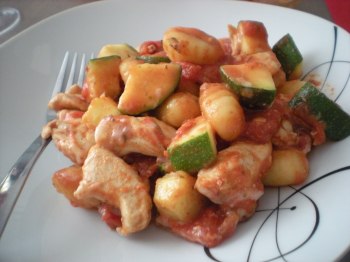 Method:
1. Heat the oil in a frying pan then add the chicken. Season with salt and pepper to taste. While the oil is heating, put on the water for the gnocchi.

3. Add some herbs then stir in the tin of tomatoes.

4. Place the contents of the frying pan in an oven-proof dish then grate cheese all over it – as much or as little as you want.

Easy peasy, lemon squeezy! This is also a recipe that could easily be modified, for example by using spinach instead of courgette or leaving out the chicken and using other vegetables to make a vegetarian version. It’s great comfort food! (Although not really recommend as a summer dish… it was 36°C the day Jan and I had it and we were boiling by the time we’d finished eating!)

15 thoughts on “Chicken and gnocchi bake”