When I was first speaking to my brother about where he would like to go while visiting us, Basel was one of the places he specifically asked to visit as he’d never been to Switzerland before. It’s within perfect day tripping distance from Karlsruhe and I wanted to eat fondue in Switzerland anyway, so I was happy with his choice. there is an express train from Karlsruhe to Basel which takes about an hour and a half, but we decided to drive down. We parked near the Badische Bahnhof, which is a joint operation between Deutsche Bahn and Swiss rail, meaning it is covered by the German rail pass, the Schönes Wochenende Ticket and the Baden-Württemberg ticket. The latter two can only be used on regional trains though, which will increase the journey time to one and a half hours from Karlsruhe and mean changing trains at least once (in Offenburg or Freiburg). From the Badische Bahnhof it is roughly a 20 minute walk into town.

Our first stop in town was at Basel Cathedral. It was a hot day and we were quite glad of the relative coolness inside the church! The first picture below is of the square in front of the cathedral (taken facing away from the cathedral)… one of those buildings is a school, believe it or not! 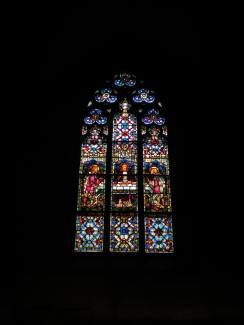 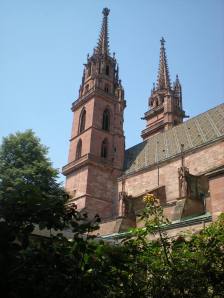 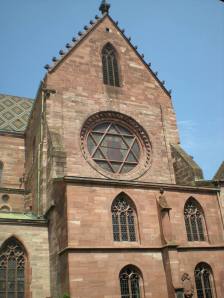 By the time we’d finished with the cathedral, we were starting to get hungry so we headed off in search of some lunch. I’ve already written about our search for fondue here. After lunch, we continued our walk around the city and came to a small market where there was a stand selling frozen yoghurt. Despite our big lunch, we all agreed that a nice, cold frozen yoghurt would go down well (I told you it was a hot day!). I chose forest fruits as my topping.

Frozen yoghurts consumed, we headed up to Theaterplatz for a look at the Tinguely Fountain, a water feature consisting of slightly bizarre machine structures in a large pool. It’s quite fascinating! Jean Tinguely was born in Basel but later moved to France. This fountain was installed in 1977.

A walk through the narrow mediavel alleyways of the old town is a must while in Basel, so that’s what we did next. This area is beautiful, and you’ll occasionally see something unusual too… like a model rhino?!

Our walk through the old town eventually lead us to Marktplatz  – Market Square – and the town hall. I couldn’t get far enough aways to get a decent picture of the front with my tiny camera, so I stole the first two photos below from my brother 😉 Phones with their wide screens are much better for getting photos of long things! The sculpture in the inner courtyard is called “Enemies United”. 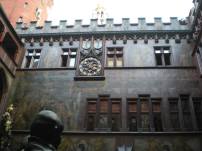 After checking out the town hall from all angles, we decided to leave Basel and take the scenic route back to Karlsruhe through the countryside. Then we headed to one of my favourite places in Karlsruhe for some cocktails. I also decided to have a mango and avocado salad, which came with walnuts and parmesan. Not a combination that would ever have occurred to me, but it was delicious! The perfect end to a lovely day. 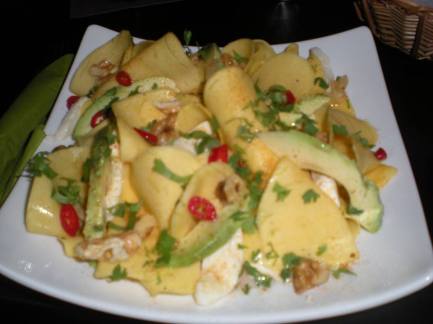