I am on a roll now with my summer challenge reading – six books down already! I bought this one on a whim from Amazon – even though it’s a sequel and I haven’t read the first book – because it was actually quite difficult to find a book with an alliterative title, especially since Megan had specified that all words had to start with the same letter, so Pride and Prejudice, for example, wouldn’t count. I discovered a few books that would fit – Rob Roy, Everything’s Eventual, Ella Enchanted and Nicholas Nickleby being a few – but could find none of them in my local bookshop, and while Amazon obviously had all four, Ghost Girl won simply because it was available ridiculously cheaply from somebody who was willing to deliver to Switzerland. This category is worth 30 points. 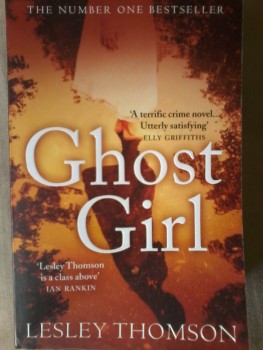 The plot: Terry Darnell was a detective with the Hammersmith police. Now, one year after his death, his daughter Stella is clearing out his house when she finds a folder of photographs hidden in his cellar. Why did he take so many pictures of deserted London streets? Stella is determined to find out, and enlists her friend/employee Jack to help her.

One particular photo dates from 1966, to a day when a little girl, just ten years old, witnessed something that would haunt her forever. The two stories, of the present-day investigation and the events surrounding the little girl back in the 60s, are told in parallel.

My review: I had a hard time relating to the main characters in this book at first, possible because I hadn’t read the previous book. Because of that, at first I enjoyed the parts that took part in the past more at first. Thomson did a good job of getting inside the mind of a lonely child and at times my heart ached for her. Gradually, I was drawn into the present-day story as well and found myself eager to know just what was going on. And unlike some of the reviews I’ve read, I definitely didn’t guess whodunnit (well, maybe who did one thing, but not who Stella and Jack were looking for) and was very surprised to find out who one of the characters was. This is an enjoyable crime novel, but I’ve taken one star off because I didn’t really like the main character (Stella) very much until near the end and also some parts seemed a bit boring and unnecessary. I liked it overall though, so 4 stars. I would probably recommend reading The Detective’s Daughter first though to get a bit of background! (Note: I have not read it so I can’t tell you whether it’s any good.)

So with this and The Wind-Up Bird Chronicle, that’s 55 points so far from books I’ve reviewed. Add to that the 45 points from the books I haven’t written up here yet and you get a total of 100 points. Halfway there!