Swiss rail has various summer offers, so a few weeks ago we decided to make use of one that involved the train to Fribourg plus a Fribourg city card for 92 francs (that’s roughly 88 euros or 64 pounds) per person. Fribourg, or Freiburg to give it its German name (although at least in this part of German-speaking Switzerland it’s referred to by its French name to distinguish it from the Freiburg in Germany), is right on the border between French and German-speaking Switzerland – officially, it’s a bilingual canton but more people have French as their first language than German (although most people speak both to some degree). Our Fribourg cards included something called Stadtgolf, or urban golf, so we decided to give it a try. Basically you get given a golf club and a ball each plus a map which tells you where the holes are. At those points, you look out for a blue pole and a red pole – the blue one is the start and the red one is the end. Like so:

The holes are dotted about throughout Fribourg, and the leaflet  with the map includes a score chart on the back and, in the middle, brief information about the sites where each holes is located, so what you end up with is a mixture of mini golf, putting and a city tour. An interesting concept, and a bit different to just walking around the town. Jan won, of course! Here are some of the photos I took during our walk/game.

More Switzerland. It really is worth the effort!

A bear with a beer! 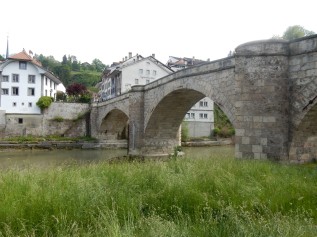 The third hole was under this bridge 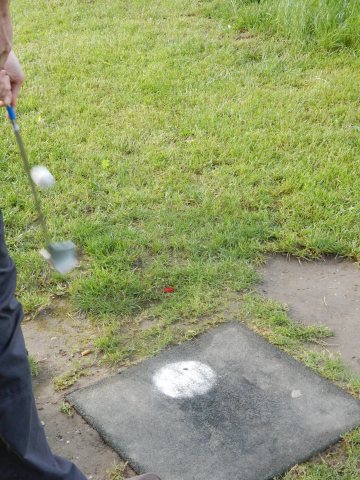 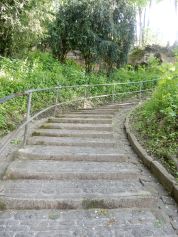 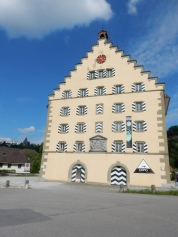 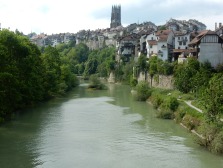 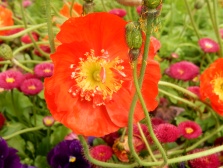 One of the bridges in Fribourg, the Zähringerbrücke, is jokingly known as the Röstigraben or rösti ditch – the cultural boundary between the German and French-speaking parts of Switzerland. Only the German-speaking Swiss could possibly be uncouth enough to eat grated and fried potatoes – the French speakers are, of course, much more sophisticated 😉 Here’s the Zähringer Bridge, from various angles: 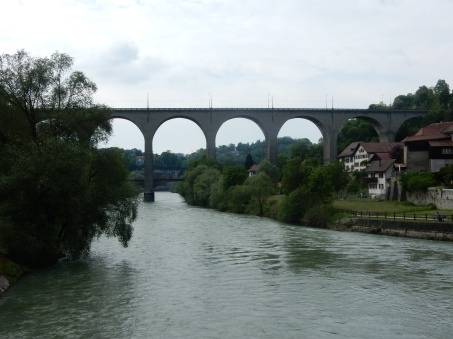 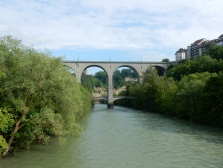 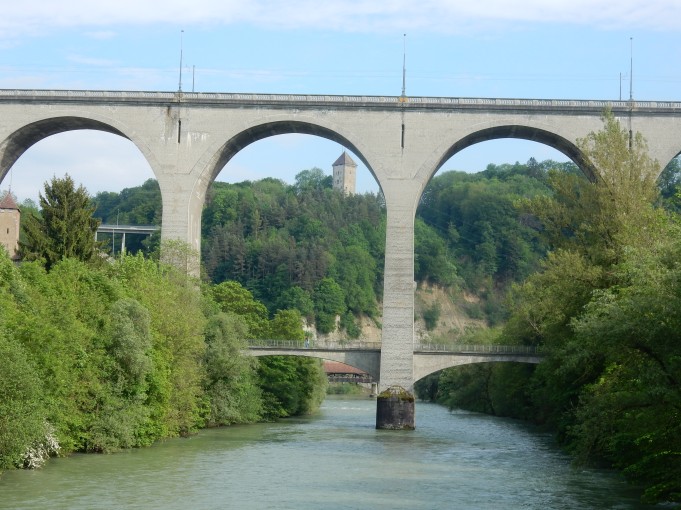 In case you were wondering, the river is the Saane or Saline, depending on which language you prefer. Some more photos of Fribourg: 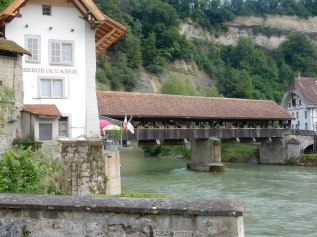 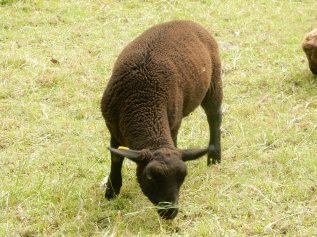 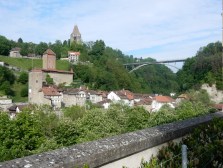 We found a kitty! 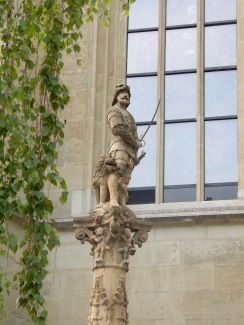 One man and his pet lion…

A lantern had to feature somewhere, obviously.

High up above the rooftops…

By the way, not all the holes were as easy as the first photo seems to suggest. Here’s one of the more difficult ones:

The photo was taken from next to the blue pole. Note the huge wall in between that and the red one? Needless to say, this was not a hole where you could get a hole in one!

The urban golf course involves a lot of walking, up hills and down stairs. It’s a lot of fun though, and if you get tired or bored you can stop at any time. There’s nobody forcing you to complete the course 😉 However, if you do you will have seen pretty much all there is to see in Fribourg/Freiburg. It was a lot of fun and something a bit different to our usual method of just wandering around aimlessly! And the city itself is well worth a visit (honestly though I’ve yet to find anywhere in Switzerland that isn’t gorgeous!) The Fribourg tourism website has more information on urban golf here (and no, they didn’t sponsor me to write this post!). At the time of writing, the price without a city card is CHF 9 for adults and CHF 5 for children. Golf clubs can be picked up/returned from the tourist information centre or, when it’s closed, the bowling alley round the corner.

22 thoughts on “Urban golf in Fribourg”