I just realised that I haven’t actually uploaded any of my cross stitching so far this year. Not that I’ve done much, what with the move and everything,but I did manage to make a few cards. Unfortunately I have a habit of forgetting to take photos before I send the cards so there are at least three missing, but here are the ones I did remember to photograph! For each one, I’ve included a picture of the full card and a close up shot of the actual stitching.

First of all, a birhday card for a friend’s little girl whose birthday was at the beginning of February. A fairly simple one to stitch, but I thought it was incredibly cute.

Next, a Mother’s Day cardI stitched for my mum. I decided the little girl looked like me. Please take note of all the French knots – there were loads of them and I hate French knots! With this one I didn’t actually take a picture of the completed card for some reason.

I’ve made two New Home cards so far this year, but only took a photo of one of them. Both were of bird houses, but in slightly different styles. Here’s the one I did remember to take a photo of. 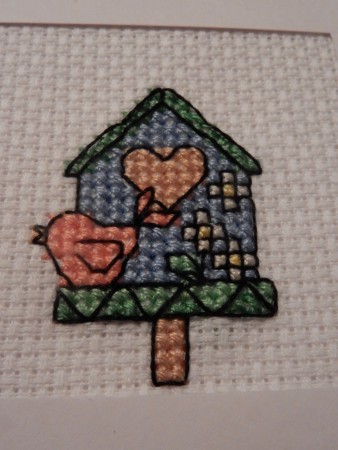 Finally, my most recent piece of stitching – a card for the wedding I attended at the weekend. Try to ignore the weird pink splodges! I had to block out the names to protect the innocent!

Next up will be a birthday card for my godson, then I think I’ll need to get started on Christmas cards based on how long they took me last year!

Would you appreciate being given a cross stitch card, or would you just throw it away?
Which of these cards is your favourite? Let me know in the comments!

18 thoughts on “The year so far in cross stitch”