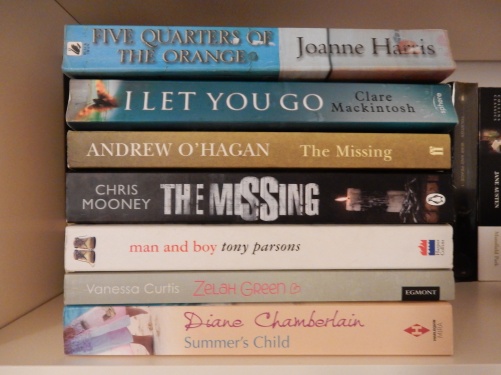 It’s time for the first monthly check in for Megan’s winter reading challenge. I’ve made some decent progress, but ended up changing a few things compared to my preliminary list, mainly because books I had ordered arrived and I couldn’t resist reading them straight away. Where they fit the categories, I’ve used them as my challenge books. Here’s my progress after one month:

10 points: Read a book that does not take place in your current country of residence – Every single book I’ve read this month would work for this category, but I stuck with my original choice for this one, Summer’s Child by Diane Chamberlain. The premise was good, but the story was a bit blah and there were too many coincidences for my liking. Everything seemed to come together a bit too neatly in the end. I gave this one three stars.

15 points: Read a book with “boy,” “girl,” “man” or “woman” in the title (or the plural of these words) – Again, I stuck with my original choice and read Man and Boy by Tony Parsons. I only chose this because it was on the BBC Big Read list and I wasn’t sure I was going to like it, but I ended up being pleasantly surprised. It’s a fairly easy read, but it’s touching in places and has some funny bits. The writing isn’t always great, but overall I enjoyed it. Four stars.

20 points: Read a book with a person’s first and last name in the title (e.g. The Storied Life of A.J. Fikry, The Story of Edgar Sawtelle) – I used Zelah Green by Vanessa Curtis for this category (also published under the title Zelah Green: Queen of Clean). This is the story of a teenager who is sent to a kind of hospital when her OCD gets out of control. It’s a little simplified and Zelah seems to make progress suspiciously quickly, but the reading age is 11+ which explains it a little. I thought the author did a good job of showing that OCD isn’t just wanting everything to be clean and needing to line things up in a precise order. You can read a full review of this one on my blog here. I gave it four stars.

20 points: Read a food-themed book. — Submitted by SCSBC15 finisher Jamie @ Whatever I Think Of! – This was the first category I completed for this challenge. I read Five Quarters of the Orange by Joanne Harris. I love Joanne Harris, and while this wasn’t one of her best books, her descriptions of food were amazing as always! Full review here. Four stars.

20 points: Read a book with a verb in the title. (For any grammar nerds out there, I mean “verb” in the most general sense, so gerunds count. For non-grammar-inclined people, just use any book that appears to have a verb in the title!) – I read I Let You Go by Clare Mackintosh for this one. Spot the verb(s) 😉 This was an intense thriller with a twist that I didn’t even come close to guessing, which rarely happens. It’s a very difficult book to review without giving away the plot, so all I will say is that there are two heartbreaking stories that are connected by one tragic event. Also, it involves domestic violence so don’t read it if that’s likely to upset you. Five stars for this one!

30 points: Read two books with the same title (by different authors). — Submitted by SCSBC15 finisher bevchen @ Confuzzledom. – My category, so of course I wanted to finish it in the first month 😉 I read two books called The Missing, by Chris Mooney and by Andrew O’Hagan. The former is a crime/thriller. It was fast-paced and I read it in one sitting. The story was pretty good and I wanted to know what was going on. I should have really enjoyed this book, but something about it annoyed me. It’s the first in a series so I might give the author another chance, but for this particular book: three stars.
The second book was theoretically about people who disappear without a trace, both those who are reported missing and those who nobody ever notices have gone (including people with no family who die at home and are only discovered by accident). Actually, the entire first half was about the author’s childhood and the second half mainly concentrated on the women who were killed by Fred and Rosemary West. There were some interesting facts, but overall it was disappointing. Two stars.

I’m also part way through both my one word title book and the first of my two books on the same subject, so I’m hoping I might actually finish next month 🙂