I am going to use this post to tell you about our final day on New Zealand’s south island and also for some general photos of Queenstown that I took on various evenings throughout the week.

We decided that we should partake in some adventure tourism before leaving the south island, so we booked the Shotover Canyon “Double Shot”, which meant the canyon swing and canyon jet for a special price (cheaper than booking each thing separately). We were told to be at the Shotover Canyon shop half an hour before our booking, which we did. There, we were weighed and waited around a bit for the rest of our group to arrive before being driven up to the top of the cliff that we would be swinging from. Jan and I decided to do a tandem swing and I’m a wimp so we chose the least scary version, The Cutaway, where they lower you over the edge of the platform and then pull the pin so you fall down (the next least-scary option is jumping forwards). Neither of us wanted to go backwards because we actually wanted to see the view as well as having the adrenaline rush. 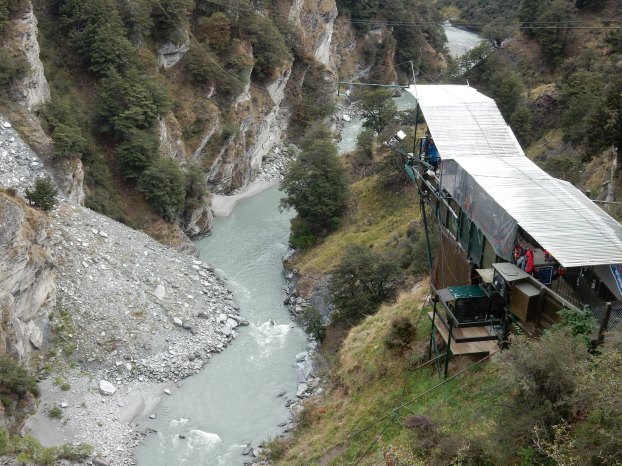 The above photo shows the platform you swing from with the canyon below. We couldn’t take a camera with us on our swing (you are allowed a GoPro if you have a proper wrist strap for it, but neither of us own such a thing), but after our swing I took some photos of other people from our group. I think it’s okay to use them here since they’re too far away to be identifiable. 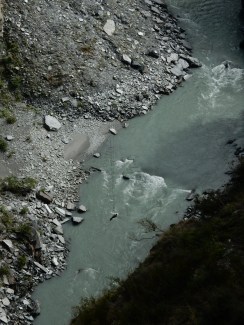 The initial freefall is 60m, but it seems much shorter… it was over so fast! I didn’t even scream when they let us go because my breath was literally taken away! After the freefall, you swing around at the end of the wire for a bit before being brought back up. Various jumping methods are available, including diving head first or going down a slide. For a small fee, you can do a second jump, but we chose not to since we had already spent a lot and had a whole week of north island to go!

Once everyone in our group had finished their jumps and purchased whatever photos/videos they wanted, we headed back to the van. Everyone else went back into town while we were dropped off at the canyon jet. Again, we couldn’t take any photos – all our possessions had to be placed in lockers so they wouldn’t get wet or fall out of the boat! But here are some photos of where we went and of one of the boats: 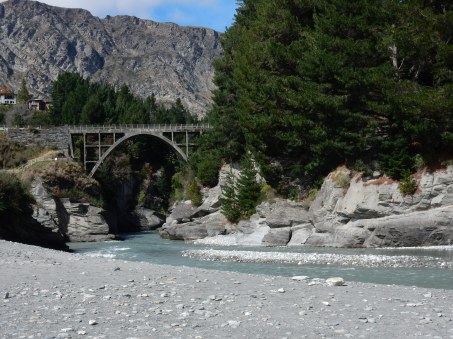 The jet ride was really fun! The driver (captain?) of the boat stopped a few times to tell us where we were and give us some information about the area and the views down in the canyon were absolutely spectacular! I so wish I could have taken photos. The only annoying part was that we had a lady behind us who would not stop screaming and carrying on! The driver used hand signals to indicate when he was about to do a 360° turn because we were supposed to hold on and brace ourselves at those times, and every time he did the signal the annoying woman would start screaming before we even started the turn (he gave us plenty of warning). Gah!! I thought the turns were fun. The worst part for me was when we went over huge rocks  because there wasn’t much warning there. We were right at the front of the boat and I got jolted around quite a lot! I can definitely recommend the Shotover Jet though.

After our jet ride, we took the free bus back into town where we decided to have a relatively relaxing afternoon. We went for lunch at an organic café called Rehab then went to play Frisbee/disc golf in Queenstown Gardens. We then took the gondola up Ben Lomond for some evening views of Queenstown, Lake Wakatipu and the surrounding mountain ranges. 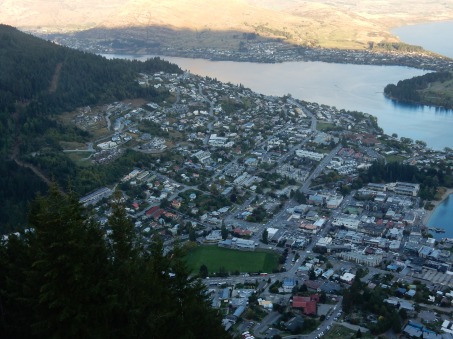 I also found some more of my little friends the Paradise Shelducks. These ones were much easier to photograph than the ones in the Gardens and I spent ages trying to get a shot of them that I was happy with. 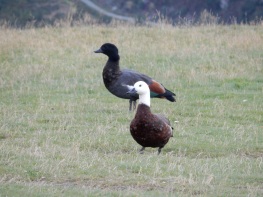 After taking the gondola back down, we tried to go to the Queenstown Birdlife Park to see the Kiwis, but it turned out to be closed (Good Friday!) so instead we went for dinner.

And now, as promised, some of the photos I took of Queenstown at various other points during the week: 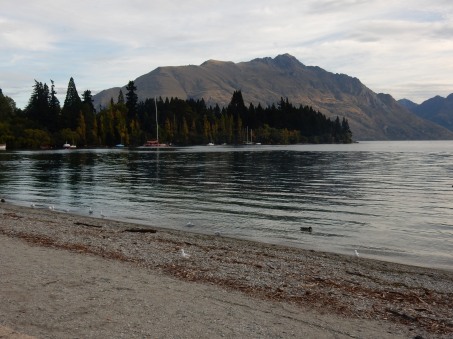 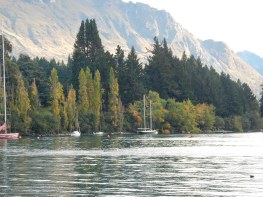 Autumn trees… behind them is part of Queenstown Gardens

Across the lake is Queenstown Gardens 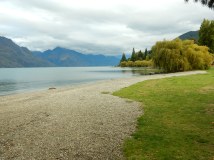 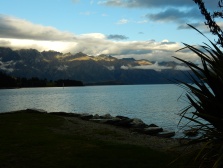 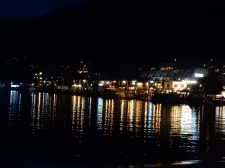 One of the few original Queenstown buildings left… former courthouse. The bar is named 1876 for the year the building was completed

Finally, I shall leave you with a photo of the full moon… which from our point of view was upside down!

As you can hopefully see, despite being incredibly touristy and not really feeling “real” (I would like to know where the actual residents live/eat/shop!), Queenstown is a beautiful. There aren’t many of the original buildings left, but the builders have done a pretty good job of making everything feel quaint and not too modern. As a base for exploring Milford Sound, the Central Otago region and other parts of southern south island, I can definitely recommend Queenstown!

That was the end of our time on the south island. The next day we returned the rental car and then spent most of the morning at Queenstown airport waiting around because all flights in and out had been delayed due to fog! Watch out for my north island posts coming soon…