I totally stole this tag from Kerri because I’m just too tiiiired to do another travel post right now. All that sorting of photos – ugh! Food, on the other hand, I can do. Here goes:

A full English or Irish breakfast, obviously. Not that I would want to eat that every day, but as a special treat, mmmm! Failing that a bacon sarnie with proper English bacon.

2. How do you drink your coffee?

With all the milk. If I can’t have one that’s more milk than coffee I need to add all the sugar. I also like horribly sweet concoctions à la Starbucks except not actually Starbucks because I don’t go there.

3. What’s on your favourite sandwich?

Don’t you mean in? No open-topped sarnies over here please! Feta, avocado and rocket please! Or bacon with brown sauce.

Well it clearly depends on the weather, doesn’t it? Soup if it’s cold, salad when it’s too hot to cook (or I’m too lazy). 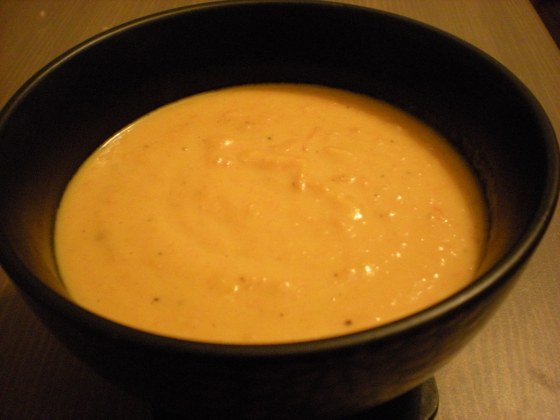 I have one called Healthy Eats that’s pretty good, but realistically all my recipes come from the Internet soo… BBC Good Food?

6. No more sweets or no more hearty foods?

Probably Indian, but British-style Indian. I’d have to go to India to decide whether I like the real deal.

I totally have to steal Kerri’s answer here and say Ratatouille because the only other food film I can think of is Chocolat and I hated that! (Book is so much better!)

9. What’s your most guilty pleasure?

Umm… I don’t know? There’s nothing I feel guilty about eating (well, other than too much and that could be too much of almost anything. Except maybe lettuce leaves.)

I feel bad that I’m stealing all of Kerri’s answers, but my stomach is just so perfect a response! Failing that my inspiration comes from whatever random stuff we have lying around after I’ve failed to go shopping again.

11. Cooking at home or going out for dinner?

Cooking and having to deal with the mess or letting someone else do all the work? I prefer the latter. Although I actually do enjoy cooking for friends (Christmas dinner for 9 anyone?) so what I’m really saying is I would rather not have to cook every single day after work (but life would rapidly get expensive if we always ate out instead. So unfair)

I don’t understand the question… high end is expensive, right? But what’s low profile? Like a place nobody else knows about? Those two things aren’t opposites, are they? I’m so confused!

I don’t have one – I like to keep trying new ones.

One of two local supermarkets. One is closer, the other sells the teabags I like. Sometimes I go to Aldi but it’s on the other side of Basel so it rarely happens.

15. The tastiest food I’ve ever eaten was:

EVER?! That’s a lot of food for you to expect me to just pick one thing from…

I had to google the Heston guy… apparently he’s a TV chef? Neither, really but if I absolutely have to pick one then George Clooney just because I still love E.R.

18. What should not be missing in your kitchen?

A freezer. I didn’t have one for about 3 years and it was so annoying!

19. What is your favourite snack?

All the British crisps… Monster Munch, Wotsits, Skips, Hula Hoops. Sadly I almost never get to eat them.

It really depends what I’m in the mood for, but bacon, yellow peppers and feta is a good combo. Plus the normal pizza cheese of course.

21. What food do you really dislike?

Oyster omelette. Also the most disgusting thing I’ve ever eaten. Maybe that should have been the answer to question 21?

Drink champagne in Champagne and port in Porto. Yes I’m aware those are drinks, but so is coffee. I also want to eat frog’s legs in France… there, I included a food!

Potatoes. I will also accept sweet potatoes as a substitute.

I tag everyone who feels like telling me about their eating habits. And now, appropriately, I’m off to find something to cook for dinner.