I’m hardly likely to read four whole books by the end of today, so I might as well get my check-in post out there today and use tomorrow for Kristen‘s link up 🙂

I changed some of my books from my original ideas (and of course some categories were still blank when I made my preliminary list), so here’s what I ended up reading in November: 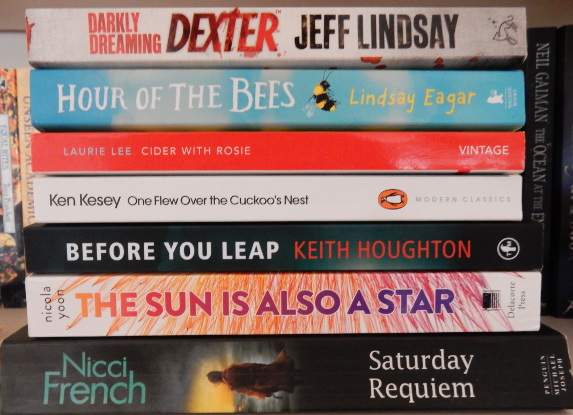 5 points: Freebie! Read any book that is at least 150 pages long.

Saturday Requiem by Nicci French. I could not resist reading this book the minute it arrived, which is how it ended up being my freebie for this challenge. I adore these books, and this one was an excellent installment. I definitely did not guess who the killer was! The ending made me desperately wish the next book would come out right now (although I’m also sad because Sunday will presumably be the last in the series). 5 stars.

10 points: Read a 2016 finalist (longlist or shortlist) for one of the following literary prizes: National Book Award, Man Booker or Man Booker International.

The Sun is Also a Star by Nicola Yoon was a 2016 National Book Award finalist in the Young People’s Literature category. I loved everything about this book! The characters… the style of writing. Admittedly the love story was little far-fetched, but it kind of had to be to work, and it didn’t spoil my enjoyment in any way. 5 stars.

Before You Leap by Keith Houghton was published on 1 November 2016! The synopsis sounded good, all the ingredients were there for it to be good, but it just… wasn’t. The plot managed to hold my attention well enough, but I didn’t really like the narrator and the style of writing didn’t do it for me. 2 stars.

15 points: Read a book by an author of a different race or religion than you.

The Color Purple by Alice Walker, who is African-American. I’ve been putting off reading this book and I have no idea why because it’s excellent! I was genuinely hooked from the very first page. 5 stars.

15 points: Read a book featuring a main character who is of a different race or religion than you.

One Flew Over the Cuckoo’s Nest by Ken Kesey. The main character/narrator is half native American (and half Caucasian, but obviously looks different enough to be referred to as “Chief”).  Another one that I had been putting off but ended up loving. The casual racism and misogyny is disturbing, but I just saw it as a product of the book’s time so it didn’t put me off in the same way it would in a modern book. And the writing is superb! 5 stars.

25 points: Read a book with an alcoholic beverage (neat or cocktail) in the title.

I read Cider With Rosie by Laurie Lee for the simple reason that I already owned it. Somehow, this book even managed to make me feel nostalgic for the years of Laurie Lee’s childhood, despite the fact that even my parents weren’t born yet! The ending was just really annoying though – I know it’s only part 1 of an autobiographical series, but come on! It just… ends with no explanation. I gave this one 3 stars.

40 points: Read two books: one by an author whose first name is the same as the last name of the author of the other book.

Darkly Dreaming Dexter by Jeff Lindsay and Hour of the Bees by Lindsay Eager.

I wanted to read Hour of the Bees so I went looking for an author with the last name “Lindsay” and Darkly Dreaming Dexter was the first one to appear. I had heard the TV series Dexter (which is based on this series of books was good), so I decided to give this a try. Unfortunately, I thought the book was just okay. It wasn’t as thrilling as I was expecting and in parts it felt more like it was written from the perspective of a child than a murderer/sociopath (maybe sociopaths do think like children? I don’t know, but either way it grated!). 3 stars for this one, and I won’t be reading the rest of the series.

Hour of the Bees, on the other hand, is adorable. Beautifully written, magical, touching, sad in places and I loved the main character! My only (minor) gripe is that it’s supposed to be for children but I suspect it will appeal more to adults (like me!) who read children’s books. I can imagine it being a bit boring for pre-teens based on the subjects my friends liked to read about when I was aged 10/11. 4 stars.

So that’s 8 books in 7 categories and a total of 120 points.
4 books, 3 categories and 80 points to go! I think should be able to complete the challenge by Christmas!

Have you read anything good this month?