Today I am checking in for the bonus round of Erin‘s current reading challenge. Don’t worry, I haven’t finished already 😉 Although I am quite impressed that I got through my choice for “favourite author”…

Here’s what I read for the challenge in February: 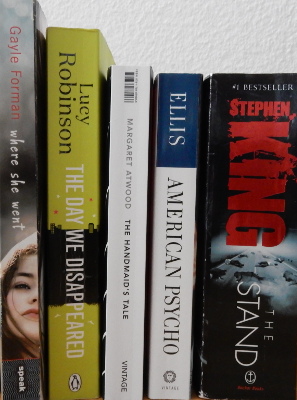 American Psycho by Bret Easton Ellis (399 pages). I had absolutely no idea what this book was about – had never seen the film and somehow had never heard anything about it. Turns out there is no real story. Not one with a beginning, middle and end anyway. Instead we just follow the titular psycho around while he socialises and shops and eats in New York City. Oh, and occasionally kills someone… brutally, graphically, violently. Obviously I was expecting it to be disturbing and graphic, but it was so much more disturbing than I was expecting. Especially towards the end. What I was not expecting was constant references to Donald Trump. Even in fiction I can’t escape him! I gave it 4 stars but I will never, ever read it again!

15 points: Read a book that starts with the letter “W”.

I had two choices for this one, but I decided to read Where She Went by Gayle Forman (264 pages) because it had been on my list longer. Also there are extra bonus points for choosing books that someone had already chosen for the challenge. I must have loved If I Stay because as soon as I finished it I knew I needed to read the sequel, but by the time I got round to reading this one I only had a vague recollection of the story. I still know the main outline, obviously, and I remember crying a lot, but the details are gone. Hmm. Anyway, I really loved this one. I was devastated for Adam and once Mia came back on the scene I really felt for her as well. It made me think about what I would have done in her situation. 5 stars.

20 points: Read a book that has a (mostly) green cover. 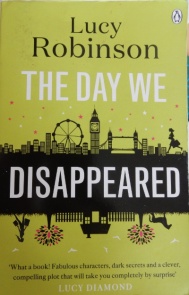 The Day We Disappeared by Lucy Robinson (434 pages). This book was not at all what I was expecting! I thought it would be some kind of chick lit/romantic comedy, and in a way it is, but it’s also so much more than that. There is romance, but there’s also a mystery and parts of it are very dark. It deals with mental health and there is a twist that I truly was not expecting. I don’t really know how to review this any further without giving things away, so I’ll just say you should definitely give it a chance. It got 4 stars from me anyway. Photo to the left to prove the cover is green 😉

25 points: Read a book with a homonym in the title

The Handmaid’s Tale by Margaret Atwood (324 pages; homonym = tale/tail). I had literally zero idea what this book was about. All I knew was that it’s some kind of classic and people seem to rate it highly. And it’s number 131 in the BBC Big Read list so I would have had to read it no matter what. It turns out that it’s really good, and also incredibly relevant right now given the current political situation in various countries. The story is a bit disjointed and vague, which would probably annoy some people, but I actually thought that was quite a clever tactic – it let you fill in the blanks yourself (potentially with even worse things than the author was imagining) and reinforced the fact that the narrator was very much kept in the dark. At the time it was written this book probably seemed extreme and nobody believed it could ever actually happen. I might have thought that myself if I had read it 10 years ago. But now, in 2017, I’m not so sure. 5 stars.

25 points: (Submitted by Linda) Read a book by your favourite author

I could never pick just one favourite author, so I chose from among the few I always list when asked. Stephen King has been a favourite ever since I read Insomnia when I was far too young to actually understand what I was reading. For this challenge, I read The Stand (1439 pages). Although I love King’s writing, my one problem with him is that he has a tendency to go on and on, long past when he should have stopped. This book is definitely one that could have done with being shorter. Admittedly it’s partly my own fault for reading the uncut edition, but even the original was 817 long, long pages. On the positive side, the writing was, as always, excellent, as was the characterisation – King always makes me feel like his characters are real, and it’s amazing how different he makes them all. How does he manage to get into the minds of such a variety of people? The story of the plague that destroyed the world and the struggles of the few survivors made a really compelling story. However, the supernatural element felt out of place in this one. The whole good versus evil, or God versus the devil (or someone like him) sub-plot made no sense, especially given the ending. Trying not to give too much away, but in my opinion “good” didn’t even defeat “evil” in this book – a few good guys turned up where the good guys were and then something accidental happened and the day was saved… but not by the people who had trekked all that way to save the day. What? It almost felt like King had got that far with the story and had no idea how he even wanted to end it. Minus one star for that. I still gave it 4 though because I really did enjoy reading it – and got through all those pages surprisingly quickly.

And that’s it. I’m halfway through the bonus round with two months to go.

Are you taking part in this challenge? Read anything good recently?