Once again it’s time to link up with Jana and Steph for Show Us Your Books… and I warn you this is going to be a long one! I well and truly got my reading mojo back in July, and not only completed Erin’s reading challenge but even managed to read another four books for a total of 14! This time I’m listing the challenge books all together (in the order I read them) and then the others.

Catch 22 by Joseph Heller (570 pages, read for the “banned book” category). Uhh, what even was this book? It was more enjoyable than the typical war story I was expecting, but it was really confusing and nowhere near as hilarious as people make out! Some bits were funny, but a lot of the humour just felt forced and ridiculous. It did a good job of showing how ridiculous and insane war is, but I wouldn’t read it again. 3 stars. 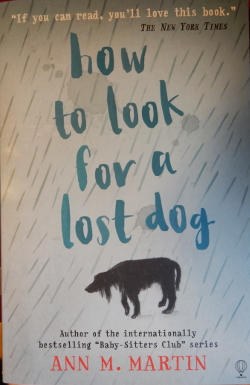 How to Look for a Lost Dog by Ann M. Martin (240 pages, read for “A book with an animal on the cover” – see photo for evidence of animal). I loved this book! I loved Rose, I loved Uncle Weldon and I wished I had a dog like Rain. I wanted to strangle the dad though, especially when he said things like “why do you have to be like this ” and told Rose to behave herself at school. Grrr. Read if you’re an animal love and like having your heart strings pulled on. 5 stars. (Note: this is the same book as Rain, Reign under a different title).

Alfie Bloom and the Talisman Thief by Gabrielle Kent (272 pages, read for “A book with a mostly yellow cover” – see photo for evidence of yellowness). Book two in the Alfie Bloom series is even better than book 1… and I already gave the first one five stars, so now what do I do! I’m glad Amy had a bigger role in this book – she’s an amazing character. And it was interesting to find out more about Ashton and Emily. One of my favourite things is that the girls in the book weren’t treated differently because they were girls – at one point Alfie wants Amy to carry out a plan because she’s “the best swimmer out of all of them”. Not like the books I read a child where the girls were always being told they couldn’t do something because “it’s too dangerous” (Famous Five, I’m looking at you!). Everyone should read this series! 5 stars.

A Seven Letter Word by Kim Slater (297 pages, read for the freebie category). I enjoyed this, but not as much as this author’s previous book (Smart – reviewed here). Finlay is an likeable enough character and I did feel sorry for him, but somehow his story didn’t grip me in the same way as Kieran’s did. I did enjoy the little titbits of information about Scrabble at the beginning of each chapter. 4 stars.

The Upside of Unrequited by Becky Albertalli (336 pages, read for “A book published in 2017”).  I loved this one and read the entire thing in two hours (when I should have been sleeping, but oh well). The characters are all so lovely and I could definitely identify with Molly and all her insecurities. It was also nice to read a book about older teens – most seem to have characters aged around 13-15. I wish this had been around when I was 16! And I also wish my sister and I had the kind of relationship Molly and Cassie do.  5 stars.

Seraphina by Rachel Hartman (359 pages, read for “Read a book with a non-human main character). This book had been sitting on my bookcase for over a year and I have no idea why I put of reading it for so long. I mean, there are DRAGONS! Dragons who can change their form and walk around looking human no less. There is also intrigue, secrets and a kick-ass main character. I finished reading it and then immediately ordered book two. 5 stars.

Broken Silence by Danielle Ramsay (408 pages, read for “A book that starts with the letter B). I had been looking forward to reading this book for ages because it’s set close to where my family live, so I was incredibly disappointed to discover that the author apparently hates Whitley Bay. Seriously, is there any need to mention every two pages that it’s “a once bustling seaside town” that’s now run-down and seedy with kids doing drugs on every corner? If you hate the place that much then sod off back to Scotland! Also, the main character is a total cliché and the entire book read like the author had done a creative writing course and learned to vary her writing style, with the result that she sprinkled adjectives around like confetti. Nobody could just “say” anything, ever. They always had to demand, instruct, state and order. Or even question sceptically, answer coolly or whisper hoarsely. Every. Single. Time. However, I did like the basic crime story that was hidden in there somewhere and persevered because I wanted to know who the murderer was (I guessed correctly slightly before the detective). right towards the end the writing suddenly got better and there was a fantastic interview scene, which is why I gave this book 3 stars instead of the 2 I had originally intended.

Let the Northern Lights Erase Your Name by Vendela Vida (256 pages, read for “A book with a cardinal/compass direction in the title). This book was strange. I actually really enjoyed it but I can’t quite explain why. The writing is amazing, almost poetic, but the story is strange, not particularly realistic (so many coincidences!) and, based on the ending, I don’t think Clarissa learned anything from her experiences. And yet I gave it 4 stars.

Thirteen Hours by Narinder Dhami (272 pages, read for “A fictional book featuring mental illness”). The mother of the main character has agoraphobia, so there#s the mental illness connection. I really liked this book. It’s gripping from start to finish (the beginning in a different way to the end). I felt for Anni and her mum and even liked the intruders. The “secret” was entirely different to what I had expected. I also liked that the author included an explanation of young carers and agoraphobia after the story. It could have been a lot more detailed, but for the young age group it’s aimed it I thought it was really good. 4 stars.

Bambi: A Life in the Woods by Felix Stalten (272 pages, read for “A book that’s related to a Disney film”). Obviously this book is nothing like the Disney version, but I was expecting that. It’s quite graphic at times and not really a book for young children – I wouldn’t give it to anyone under ten. It’s a nice enough story and wonderfully written, but I felt like the author went a bit overboard on the portrayal of man as totally evil. 3 stars.

Silence is Goldfish by Annabel Pitcher. I meant to read this for my “mental illness” book, but it turned out the main character’s refusal to speak was on purpose and not true selective/ elective muteness after all (rather than being unable to speak, at one point she has to force herself not to!). I enjoyed this book and read the entire thing in a morning while waiting for some people who were visiting us to wake up. I felt sorry for Tess, and although the way she handled her situation wasn’t the best, it felt realistic for a teenager. The heart to heart between Tess and her parents at the end really made me smile. Not perfect, but really good. 4 stars.

Toten Stille by Daniela Arnold. Read in German, the title literally translates as Deadly or Deathly Silence. A serial killer is keeping women prisoner for months and torturing them before killing them and leaving the bodies for the police to find. At the same time, a woman is involved in an accident and her husband, child and friends then claim she’s not who she says she is. When the evidence points to her being the murderer of the other women she needs to figure out what’s going on. This book was fast-paced and thrilling, the action never let up for a minute. The ending annoyed me though – somehow the detective working on the case managed to work out who the culprit was based entirely on her intuition despite the fact that they had never come across this person in the course of the investigation and his name had not once been mentioned in the book. Umm, okay then. It passed the time well enough and was a quick read but I’m not sure I would read anything else by this author. 3 stars.

Vicky Angel by Jacqueline Wilson. In the interests of disclosure, I should say I wouldn’t have read this book if it wasn’t on the BBC Big Read list. I don’t think this is one of Jacqueline Wilson’s better efforts. While it is interesting to see a book for pre-teens and younger teens that deals with death/grief, it seemed a bit simplistic even for the target age. Also, I just could not like Vicky, even though I was probably supposed to feel sorry for her being dead? Actually I thought Jade had a lucky escape – at least now she can get on with her life without her bullying so-called “best friend” putting her down all the time! 2 stars.

Bang, Bang, You’re Dead by Narinder Dhami. After Thirteen Hours, this book was a bit of a disappointment. I really felt for Mia and was worrying about Jamie right along with her, but then the ending went in a direction that I wasn’t expecting and I wasn’t sure what to think.  It was all a bit odd. The “twist” was a bit too abrupt and it felt like there wasn’t enough time left to handle it properly. The mum’s bipolar disease is handled well though. 3 stars.

And that’s it… 14 reviews. If you’ve got this far you deserve a medal (I did warn you though!). One day I will learn to review books more succinctly. Head to the link up to see what everyone else has been reading and – if you’re anything like me – add even more books to your never ending want-to-read list! And if you’ve read any of these books let me know in the comments whether you agree with my opinion 🙂