As you may or may not have noticed, it was my birthday on Sunday. I’m now 34 – less than a year until I have to tick the next category in age ranges (why is it always 35 to something) and less than a year left for my 35 before 35. Eeep. Obviously, 34 doesn’t feel too different so far. Obviously I am another year older, but at this point I’m also only 4 days older than I was before my birthday…

Part of my gift from Jan was a trip to look for shooting stars. As you may know, the Perseids is a meteor shower that takes place every year from around mid-July, peaking between the 12th and 14th of August… i.e. right around my birthday. Since it was cloudy in Basel on the 12th, we had to go hunting for them elsewhere. So Jan hired a car, which he eventually managed to pick up in the afternoon after some mix up about where it was. Since it was still light, we went to Solothurn first, where we were just in time to climb the tower of the Baseltor before it closed. 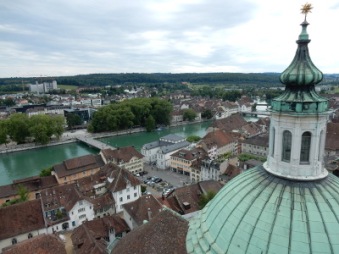 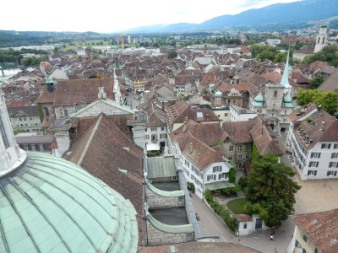 Back down on the ground, we took a walk through Solothurn and then went for dinner (I had tuna steak. It was delicious). Then I decided since it was my last meal as a 33 year old I deserved dessert. Vanilla ice cream with chocolate sauce. Yum! I didn’t take any photos of the food, but here’s one of the restaurant we ate at:

After dinner, we got back in the car and drove in a generally south-ish direction, hoping to find somewhere less cloudy. We eventually got to Bern, where we checked the cloud radar and decided to move further south. We eventually ended up in Spiez, which is where we got out of the car. First we went down to the lakeside (Lake Thun for those who are interested) and then we headed up to a castle on a hill so that we could see more of the sky at once. I still only managed to spot a grand total of three shooting stars the entire time we were there, but we did see a bat, which is always cool. Midnight struck while we were by the castle, but unfortunately no meteorite showed itself to wish me a happy birthday 😉 From what I could see, Spiez looked like a nice place. We’ll have to go when it’s light some time. Here’s the castle and a church that was opposite it – I thought the moon beside it (half hidden behind a cloud) looked cool. 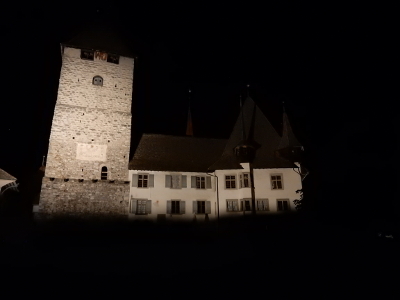 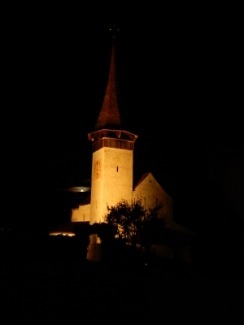 It was 2 a.m. by the time we got home, so all I did was go to bed, leaving my cards for the morning.

Such a beautiful place to see in my 34th birthday. Once again, I’m so glad we took the chance and moved to Switzerland.