Yes, it’s another tag post… I totally stole this one from Audrey of Life as Louise, who in turn got it from Stephanie (who I believe was actually the original creator). It’s all about “firsts”. So, let’s just get straight into it.

What was your first word? My baby book says it was “Dada”.

Do you still talk to your first love? What do we consider first love here? The boy I thought I was “in love” with at 10 went to a different secondary school and I haven’t seen him since. The first person to break my heart and the person I really liked throughout my entire teenage years are both my friends on Facebook but neither actually interacts with me, ever.

What was your first alcoholic drink? Apart from trying sips of my parent’s wine/beer (and hating them!) probably a glass of Babycham at Christmas. Do people even still drink that?

What was your first job? Does babysitting count? I didn’t get paid for taking care of my siblings but some of my mum’s friends paid me. Otherwise it was giving tours of my university to potential future students. We got paid 10 pounds per tour, 50p of which was taken off as National Insurance contributions.

First pet? A cat called Rocky (short for Little Rock). He was actually my uncle’s but we looked after him for about a year.
Here’s a (blurry!) photo of me aged 4ish with a pet who was not mine:

What was your first car? Ha! I can’t drive.

Who was the first person to text you today? I haven’t received a text today.

Who was the first person you thought of this morning? Jan. The thought was along the lines of “either snooze your alarm or turn it off, but please make it stop!”.

Who was your first grade teacher? I have no idea! My mum might know.

Where did you go on your first aeroplane ride?  (Sorry, had to change it to British spelling!). I’m assuming it was when we moved to Northern Ireland, so Belfast.

Who was your first best friend and do you still talk? A girl called Jennie. She was my mum’s best friend’s daughter so we were kind of brought up together and forced to be best friends. We occasionally communicate via Facebook but I haven’t seen her since I was about 15.

Where was your first sleep over? I imagine it was at Jennie’s. We were at each other’s houses all the time. Unless I slept over at an aunt’s when I was really tiny? Both sets of grandparents lived 6 hours away so it wouldn’t have been there.

What was the first concert you ever went to? I have no idea! Possibly Boyzone? (Let’s not talk about how I had weird taste in music at 13!).

What was your first broken bone? I’ve never broken a bone.

What was your first piercing? Ears, on holiday in Wales. I think I was 7. I know it was a birthday present anyway.

What was the first foreign country you’ve gone to? Is that even correct grammar? Anyway… it was Greece.

What was the first movie you remember seeing? Beauty and the Beast with my grandpa, the year we moved back from Northern Ireland. (Wait… does this even mean at the cinema? Audrey answered as if it did, but the question just says “first” and I’m sure I watched Alice in Wonderland on video before that!).

When was your first detention? Ooh, I don’t know! I can’t remember if I ever got detention before I moved to my dad’s, but I had a few at the high school I went to up North. Mainly for not doing homework, once for talking in Maths (even though I was telling somebody to leave me alone! The teacher was really strict and awful.).

Who was your first roommate? Umm, nobody. The only person I ever shared a room with was my sister. And people I shared a flat/house with are not roommates whatever Americans might think!

What was the first sport you were involved in? I played netball in year 4.

What is the first thing you do when you get home? I work from home 😉 On the days I have to go into the office I come home, grab my mail (if there is any) and collapse on the couch.

When was your first kiss? It was in Northern Ireland, so I was probably about 7. I was with the aforementioned friend Jennie, who talked me into it. I don’t remember the boy’s name, but he was older. After that I never had another “real” kiss until I was 13.

This post doesn’t have many photos, so here’s one of me in my Brownie uniform at around the same time: 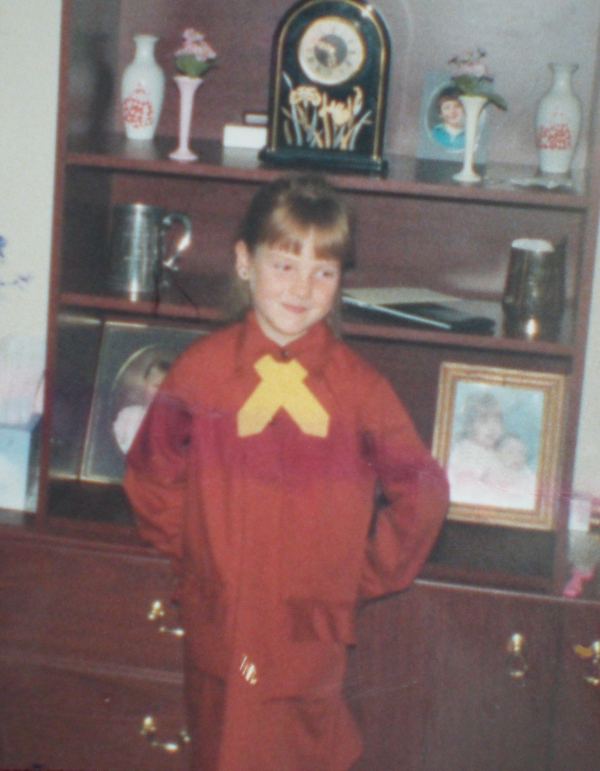 Okay, that’s it. Tell me some of your firsts in the comments… or if you decide to do the entire thing let me know and I’ll come and check out your post.