Hello lovely readers. I don’t know how it was for anyone else, but for me August went fast! I can’t believe it’s September already and time for another round-up of what I’ve spent the past month doing. As always on the first Thursday of the month, I’m linking up with Kristen for What’s New With You? So, here’s what I did in August. 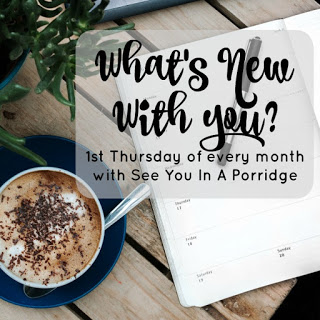 Eating. This is really bad, but I ate so many plain (as in just salted) crisps in August. So many. I’m not proud. Also tinned soup.

Drinking. Ice tea… the shop bought kind that’s full of sugar. Again, not the most nutritious. But it’s refreshing and it’s been too hot for normal tea. I’ve also been drinking Rhubarb juice – I found it when we went to a supermarket in Germany and I was intrigued so into the basket it went.

Reading. I read a lot in August, and managed to finish Erin’s reading challenge. The longest book I read was probably Outlander. Unnecessarily long if you ask me…

Watching. We went to the open air cinema and watched the new Jumanji film. I really enjoyed it. I liked how they made it recognisably related to the first one but a different concept so it didn’t feel too repetitive. And I thought the brief mention of Alan Parrish (Robin Williams’ character in the first film) was a nice touch.

Cross stitching. Birthday cards for my brother and my godson. Both have their birthdays in September, so their gifts needed to be sent off in August to make sure they arrived on time.

Making. A pattern I stitched in July into a birthday card for a friend’s son – sometimes I stitch things then take ages to actually do the card-making part!

Seeing/hearing. The original Blues Brothers! They were at a free music festival in Basel so obviously I had to go and see them.  Then Jan and I went to a performance on Friday (31 August – so just about last month) featuring someone Jan is in a choir with. Even when Jan isn’t directly involved I have to go and support his choir members 😉 It was bizarre but very cool.

Celebrating. My birthday! I was working during the day and in the evening Jan had his first choir practice after the summer break the day of my birthday so he couldn’t really miss it, but I treated myself to cake and we went out for a meal the following evening. I got some lovely gifts and enjoyed relaxing and having control of the remote for a change 😉

Winning. At mini-golf… as you will know if you read my last post. One item off the 40 before 40 list already. Woo hoo!

Buying. All the books…. I’m so bad. And soup… I placed an order with British Corner Soup and the day it arrived I immediately had Scotch broth for lunch. YUM!

Also, a few updates ago, you may remember me hinting about something else that was going on around here that I couldn’t tell you about yet. Well, after multiple rounds of interviews with various increasingly higher up people, I can now reveal that Jan has a new job! He starts in November and it will be in Zurich, but we have no plans to move – at least for the moment. We both love living in Basel and he thinks the commute will be similar to his current one so we’ll see how it goes.

I don’t know what else to tell you about August. Jan was away one weekend for a choir practice weekend. I was pretty much just here and mostly working. As I mentioned in the intro, I feel like the entire month went by in a flash… but I’m okay with that. Next Friday we have visitors coming and I have the last two weeks of September off work so I’m very much looking forward to the next few weeks.

How was your August? I hope you all had a good one! Check out the link up to see what’s new with Kristen and all the other participants.