Last year we were informed that our building, which was built in 1986, was going to be renovated this year. Last month, as I mentioned in this post, the windows and radiators were replaced. Then this week the main part of the work started… the replacement of the bathrooms and kitchens.

First, the builders covered our entire corridor in wooden boards topped with dust sheets. The doors also got their own special dust sheet type things, with zips to allow us to still go through them. 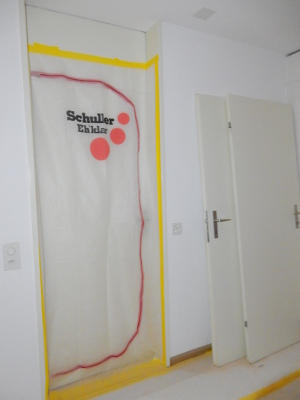 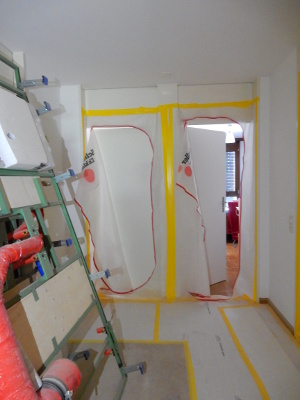 The doors leaning against the well belong to the bathrooms. They will eventually be getting painted and returned to their rightful places.

Our shower used to be in the left-hand corner of this room, with the toilet on the right: 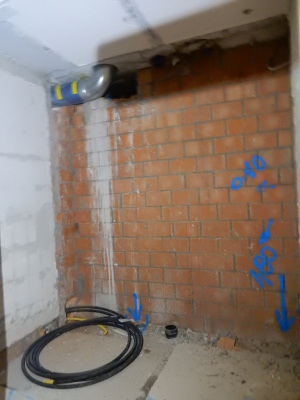 The room that used to contain the bath still has one wall of tiles but has acquired some cryptic markings: 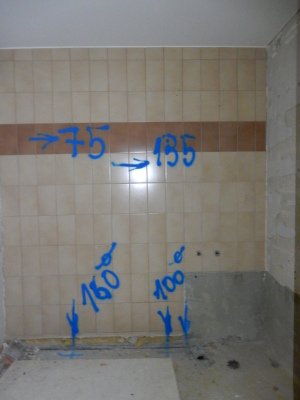 Here’s the kitchen. The big silver pipe in the corner wasn’t there yesterday… progress, I guess? 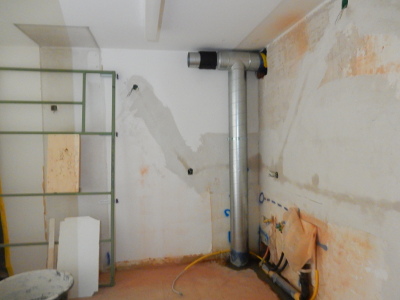 They put a “wall” between the kitchen and the dining/living area to try and keep the rooms that aren’t being renovated somewhat usable. The first photo shows it from the kitchen side, the other is from the dining room. 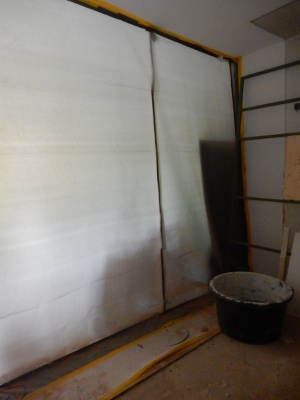 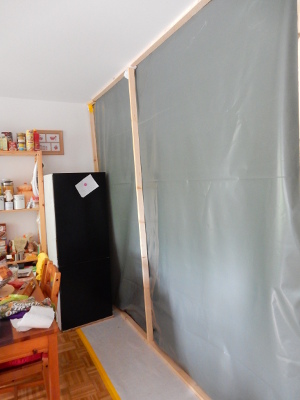 Note the fridge in the second photo… we are at least allowed to keep that until the new one is in.

And moving left from the fridge, here’s where we’ve put all the food and kitchen equipment we thought we might need in the next few weeks… 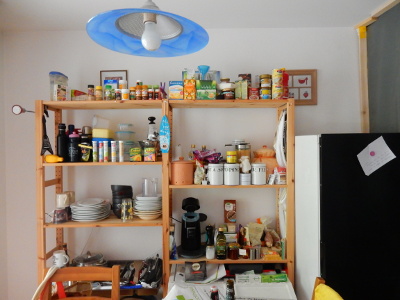 We’ve been given a hotplate so we can attempt to cook and there’s a sink attached to the railing in the stairwell (I should have taken a photo of that for you as well) where we can theoretically wash dishes – although it’s slightly awkward. We also have a portable toilet, which is exactly as wonderful as it sounds (/sarcasm). For now, however, we  can use the shower and toilet in one of the empty buildings next door (for reference, our building is split into three separate addresses, each with its own entrance, but down in the cellar there are connected doors so we can get into the other “buildings” without actually going outside). That will change when it’s their turn to have everything ripped out in two weeks, but by then temporary showers and toilets are supposed to have been installed in our showers. I’m curious to see how that’s going to work.

So, things are a little chaotic around here and I’m pretty sure we won’t be spending much of the weekend at home. However, on the bright side, the first week is already done and we survived. Just another three and then we’ll be on holiday for a week, and by the time we come back they should be basically finished. Hurrah!

Oh, and if you were wondering, I’m not working from home while all this is going on. I’ve rented a desk in a “co-working space”, which is slightly different to what I’m used to. New experiences all round!

I hope everything is much more normal in your lives, dear readers (I type, while muttering to myself: this too shall pass).

14 thoughts on “Greetings from the building site!”