Hello friends! I took some photos of our kitchen and bathrooms the other day since I thought I should probably share those with you before all our stuff was back in and everything returned to its usual chaos. There are still a few bits to be done, but at least now things are usable!

Last week someone came by, took out one of the kitchen cupboards and replaced it with another one… we had for some reason been given one without an LED light but apparently there actually was supposed to be a light on the bottom of that cupboard as well (all the other top cupboards have them). How the builders didn’t notice or, if they in fact did notice, why they went ahead and installed the cupboard anyway is a mystery to me. But there we are. We also noticed the other day that the handle on one of the cupboards is misaligned – all the other ones are in the middle – you may see which one on the photos. So we’ll have to inform the construction manager about that. Also, the company that was installing the glass panels in the kitchen were only able to install one of them (luckily the one behind the hob so I can cook!). They came the one time I wasn’t home – I was away for precisely 1.5 hours because of an appointment – and left a note saying the work couldn’t be completed because the dimensions they’d been given were wrong. *Sigh* We’re also supposed to get a sliding door for the kitchen at some point. And one bathroom the glass wall for the shower is still missing, so currently we’re showering in the bath. Since that also doesn’t have a curtain (apparently a curtain pole will not be provided – that’s our responsibility. If we’d known that from the start we could have kept the old one!) “showering” involves sitting down in the bath so the sides can protect the rest of the bathroom from water. Why must everything be complicated? But anyway, you didn’t come for a wall of text, I’m sure. You want photos!

Apologies for the quality of these – the lights are really bright and I don’t really know how to use my camera properly, so yeah… 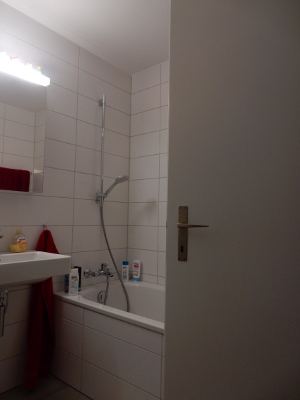 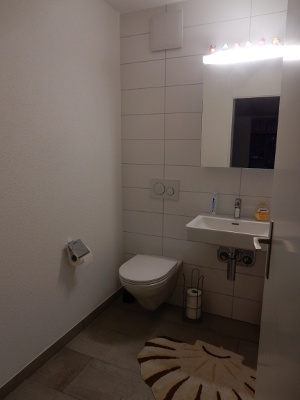 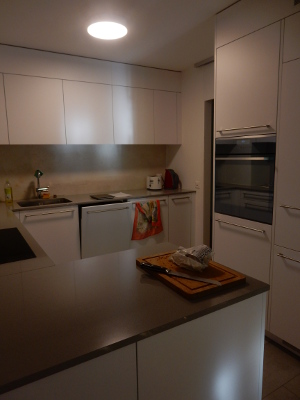 I wanted to end this with a link to where you could see how the bathrooms and kitchen looked before the renovation, but apparently I never posted any pictures so the best I can do is say check out the Photo an Hour tag. There you can at least get an idea of the lovely eighties brown of the tiles, etc. I definitely much prefer white!