I’ve seen this little survey on various blogs – I got it from Kristin, but Tanya and Audrey have also done it. I wasn’t tagged by anyone, but I wanted to play anyway.

What book has been on your shelf the longest?

I have a lot of books I was given when I was little and I obviously can’t remember which one was first, but I’m going to go with The Wind in the Willows. I’ve linked to a random version. Mine has a different illustrator. Also, I’ve lost the dust jacket.

What is your current read, your last read, and the book you’ll read next?

Currently reading The Basic Eight by Daniel Handler. The last book I read was Dead Wrong by Curtis Jobling, book two in the Haunt series. And as for next read… do you seriously expect me to know that already? Let’s just go with it will be one of these: 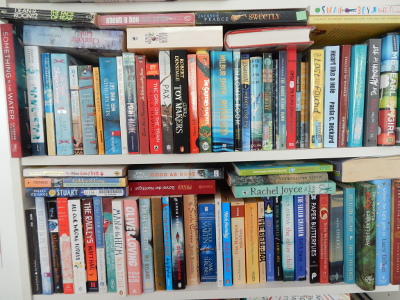 Or one of the ones that have crept onto the shelf above because apparently two to-read shelves aren’t enough?

The Catcher in the Rye – although I am starting to find a few other people who disliked it now. I spent the entire book waiting for the story to start but then nothing ever actually happened. I was in my 20s when I read it so maybe you have to be a teenager to understand? I also hated Wuthering Heights. I read half of it three times before finally finishing it then immediately giving it to a charity shop.

What book do you keep telling yourself you’ll read, but you probably won’t?

Most of the books on my non-fiction shelf. I am absolutely terrible at reading non-fiction, even if it’s a subject I’m really interested in.

What book are you saving for retirement?

Um, none. I mean I plan to read as much as possible once I retire but there are no books I’m saving specifically for that time. Maybe I’ll finally get to all those classics that really intimidate me?

Last page: read it first or wait ’til the end?

I have a colleague who always reads the end first then only reads the rest of the book if she likes how it ends. I just don’t get that. I would never read the last page before even starting the book!

Acknowledgement: waste of paper and ink or interesting aside?

Hmm, I don’t think it’s a waste of paper necessarily but some of them are so long. If it’s like a little paragraph I might read it, but an entire page just listing random people? Eh, no thanks.

Which book character would you switch places with?

Lucy from the Narnia books. I’m sure I’ve said this before, but when I was little I was convinced Narnia was a real place and I was desperate to go there.

Do you have a book that reminds you of something specific in your life (place, time, person)?

The Chalet School books remind me of my grandma’s house because that’s where I fist discovered them – one of my aunts had left a couple there from when she read them as a child and I found them one visit and devoured them. My grandma then let me keep and thus my collection was born. I have most of them now but there are still gaps. Also, Agatha Christie reminds me of my step-mum but that’s mostly because I inherited her collection. I never actually discussed them with her when she was alive or anything. They’re currently all in boxes at my dad’s house but I will get them over here one day.

Name a book that you acquired in an interesting way.

My dad used to work for a recycling plant, specifically on the belt sorting the stuff that could actually be recycled from everything else – you wouldn’t believe the crap people put in their recycling bins! And I don’t just mean as in “yes pizza boxes are theoretically cardboard but we don’t recycle things that are covered in grease and old cheese”. There are people out there who just use them as an extra rubbish bin – many dirty nappies came down the belt and my dad once told a story of a dead rabbit in a carrier bag. Like, what? Anywaaaay… many, many people throw their unwanted books in the recycling bin (😢😢) and my dad “rescued” tonnes of them from the belt. I got my pick of which ones I wanted. Going Postal by Terry Pratchett and Bridget Jones’s Diary are two I remember. Some were in not the best condition but others you could barely tell had been thrown away.

Have you ever given a book away for a special reason/to a special person?

I… don’t know? I give people books all the time. Almost everyone gets books from me for Christmas and birthdays. But for a special reason? Not sure. I was planning to give Jan Your Baby’s First Word Will Be Dada last Christmas as a silly joke present, but since there were no babies there was also no book.

Which book has been with you to the most places?

Presumably any of my childhood books that moved with us while we were in the army. Ooh, I’ve just remembered I have these two personalised books my grandparents got me – “Beverley and Father Christmas on a Sleigh Ride to the Moon” and “The Pussy-Cat’s Picnic” (I’m not 100% sure on the title of the second, but it’s something like that). My address at the time is mentioned in the stories and it’s the one from before me moved to Northern Ireland so those ones. And those should probably have been my answer for question one too. Oh well. Also I know I picked them up from my dad’s last time I was there but I have no memory of unpacking them or putting them anywhere so now I need to figure out what I’ve done with them…

Any ‘required’ reading that you hated in high school that wasn’t so bad two years later?

I actually liked everything we read in high school. There are a few books other people read in high school that my class never did but I have read since and didn’t particularly enjoy – specifically The Catcher in the Rye and Lord of the Flies, but they don’t count since I didn’t read them in school (and also still don’t like them). Ohh, wait… I hated Andorra by Max Frisch, which we read for A-Level German. I’ve never re-read it though so no idea what I think now.

I don’t mind, as long as it’s readable. Most of my books are used – I could never afford to buy all the ones I read brand new. Especially living in Switzerland! And I don’t own a Kindle, mainly because 99.9% of Kindle books on Amazon tell me they’re not available in my country.

Have you ever read a Dan Brown book?

My grandma bought Jan four Dan Brown books for Christmas one year so of course I read them all. I liked some better than others. They’re quick reads anyway.

Have you ever seen a movie you liked more than the book?

High Fidelity works so much better as a film!

Have you ever read a book that’s made you hungry, cookbooks included?

Who is the person whose book advice you’ll always take?

I have one good in real-life friend (who also happens to have a blog) always manages to buy me books I’ve a) never heard of and b) end up loving – one of my favourite books of last year was a book from her. I also always get loads of book recommendations from the Show Us Your Books link-up.

Is there a book out of your comfort zone (e.g. outside of your usual reading genre) that you ended up loving?

I very surprisingly ended up loving The Power of One by Bryce Courtenay. It involves boxing. I could not care less about boxing. But I did very much care about the main character in this book. I would never have even picked it up if it weren’t for the BBC Big Read!

That’s all the questions. If you feel like doing this let me know and I’ll come and have a nosy – I would particularly love to see Kezzie‘s answers to these questions.

6 thoughts on “I Dare Ya book tag”