Hello! As I’ve already mentioned, this month I am teaming up with Steph to reduce the number of single-use plastic items I use. Today I am going to take you through a normal working day during plastic-free July. One of the things I committed to doing was to choose alternatives to plastic packaging wherever possible and, if I couldn’t find one and the item is non-essential, go without. However, I decided that if I already had things in plastic containers I would use them (I mean, I’m hardly going to throw them out and simply waiting until August to use them isn’t possible if they go off in July), so as I go along I will point out where I am using an item that’s made of or comes in plastic – even if it’s not single use, I will show you that it’s not plastic-free. The day in question is yesterday, the very first day of the challenge… 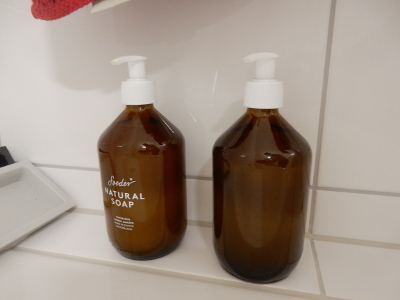 It’s 6:30 a.m. (yawn!) and time for my shower. Jan and I visited both of the zero waste supermarkets in Basel on Saturday and bought this shower gel (right – labelled as soap because the bottle that went with the actual shower gel was too small) and shampoo. Now we have the bottles we can go back there and refill them. The shower gel is fine but I’ve yet to use the shampoo so once I do we’ll see how my hair feels about it…

I’ve literally just started this challenge and I’m already failing! Breakfast is a slice of raisin toast… which comes in plastic packaging. Since I only committed not to buy any more plastic and this was purchased in June I’m safe 😉 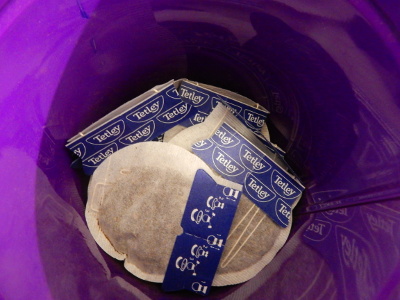 A cup of tea before it gets too hot. Did you know that many teabags contain plastic? It’s used to seal them shut. I found this post about common tea bands (in the UK) and whether they use plastic in their teabags. I have Tetley English Breakfast Tea. The company claims that their string and tag teabags are plastic free. Since mine have strings they should be fine. However, the box itself came wrapped in plastic (both plastic and box are long gone so I can’t show you). The milk is also in a plastic bottle. 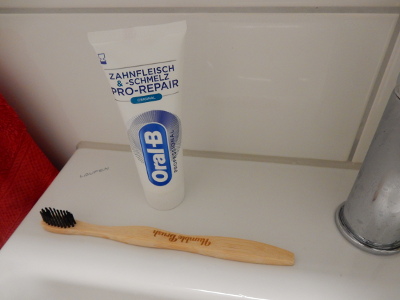 Teeth brushing time! My toothbrush is bamboo (hurrah!) although the bristles are still plastic. Also, as you can see, my toothpaste is in a plastic tube. I did notice one of the zero-waste shops in Basel has alternatives so I want to try those at some point but I will use this tube up first. I also noticed the other day that this is made by Proctor and Gamble, who I’ve actually been boycotting for about 18 years so I’m doubly annoyed by this toothpaste! I’ve never bought Oral B before and I never will again.

Lunch break time and I took a quick trip to the supermarket but forgot to take my phone or camera to record all the plastic. At least I can show you what I purchased.

The margarine ran out yesterday so now I can’t have any more until August. But I can’t have toast either so it doesn’t matter. I’m not 100% sure what the butter is packed in – any guesses? Whatever it is it’s certainly less plastic than a margarine tub! The loose potatoes are clearly in my reusable bag, although the adhesive sticker from weighing them most likely contains plastic. Pesto in a glass jar inside a piece of cardboard. Apparently the inside of most jar lids is coated with plastic, but at least jars can be reused in theory. Tuna in a tin. Some (most?) tins are coated with plastic, apparently. I don’t know if this one is. The chocolate packaging is cardboard and some metallic foil. I wouldn’t usually buy Lindt chocolate but most of the others have plastic wrapping. 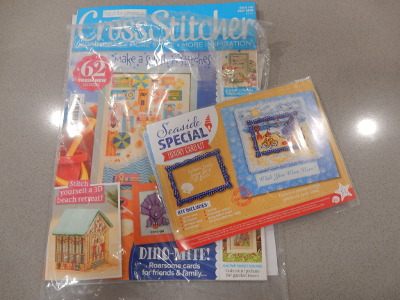 Picked up the mail on my way back upstairs. My cross stitch magazine arrived, and of course it’s packaged in plastic. I subscribe to two cross stitch magazines and both of them come wrapped in plastic every month. One subscription is up for renewal soon and I may just let it run out. I have plenty of magazines so it’s not like I’m going to run out of things to stitch any time soon…

Now for lunch. It’s way too hot for soup, but I only have ten minutes left of my break so it’s all I have time for. I would have preferred salad or a sandwich but I can’t have either without single-use plastic packaging.  And speaking of lunch, Jan said if I was writing about my plastic-free efforts I should mention that he bought a reusable lunch box a few weeks ago and has been gradually figuring out which places close to his work are willing to refill it for him. He has also created a document on the internal portal so that other people working there also know where they can go to have the containers they’ve brought from home filled with food. There you go Jan, consider it mentioned. (Not that he will ever read this but whatever 🤷).

The dishwasher needs to be run. I bought these dishwasher tabs a couple of weeks ago and I specifically chose these “Held” ones because they’re made by Ecover and are supposedly environmentally friendly. Then I got them home, opened the packing and discovered that each individual tab is wrapped in plastic! So annoyed. I am using them for now since I have them, but as soon as they’re gone it will be back to Coop’s own “eco” brand, which have a dissolvable film. (The Migros eco ones also have a dissolvable film but the tabs are inside a plastic bag within the outer cardboard box – totally unnecessary!). 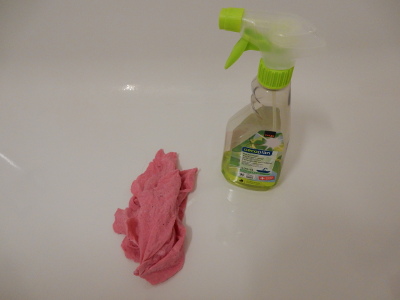 Finally finished work (unrelated to plastic, but can I just point out that it’s 5:45 p.m. and I started work at 7:30 a.m…. my actual working hours are 8 a.m. to 5 p.m.!). Now I need to do some cleaning. My bathroom cleaner is in a plastic bottle. The cloth is from a multi-pack and so came wrapped in plastic at some point.

Oh, while I’m in the bathroom I should show you this…

Liquid soap. It’s been refilled multiple times, but the refills we’ve used in the past were also made from plastic. We still have one more full refill pack, but once that’s empty I shall try to find a new solution. 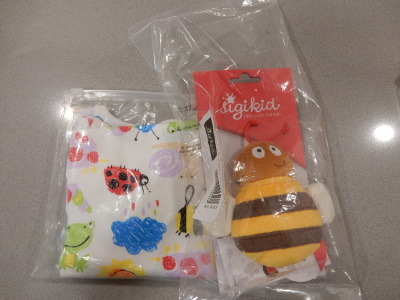 My cousin had a baby! Both of these gifts are in plastic. The one for a clothing has a zip so could be reused, but I obviously don’t know whether my cousin will actually do so. The rattle packaging is definitely single-use. Sigh.

Time to start dinner. It’s hotter than Hades (when will this heatwave end?) so we’re having baked potatoes for tea… the oven will heat up the kitchen but it’s still preferable to me actually standing by a hot stove.) We are having the potatoes with tinned tuna and bacon bits. The bacon bits use-by date is tomorrow (today when this post goes up) so they have to be used, despite being packaged in plastic. Most of the other the things I would normally eat with baked potatoes either come in plastic, require cooking, or both (hummus, cheese, chilli con carne…) so my options are limited. 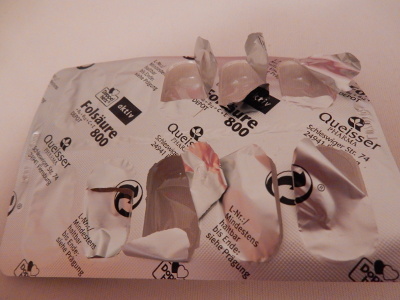 Before bed I take folic acid. You’re supposed to start taking it as soon as you decide to try for a baby and carry on until around week 12 of your pregnancy. I briefly stopped taking it when the midwife told me to at around 14 weeks, but two weeks later when I lost the boys I was advised to start taking it again immediately because it would hep get my iron levels back up. So basically I’ve been on folic acid almost non-stop since March 2015, and I will continue taking it until I either actually make it to 12 weeks pregnant again or we give up trying… I dread to think how  many of these plastic things I’ve already thrown away and how many more there will be in my future. (And that’s not even mentioning all the syringes, needles single-use plastic gloves, etc. at the clinic plus the needles I used to give myself injections, the packaging from the hormones I’ve had to take orally, etc. Infertility is not environmentally friendly!)

Other things I haven’t spoken about or photographed but did do: as I mentioned, we’re in the middle of a heatwave. I’ve been guzzling water all day. All from the tap and drunk from a glass. No plastic bottles in sight! I also took my reusable fabric bag shopping with me, as always. I only occasionally purchase a paper bag from the supermarket when I need one to take out the paper recycling in.

So, that was my first day. I hope this post has given you some insight into a few the unexpected (and not so unexpected) areas that plastic crops up and some ways of avoiding single-use plastics. As you can see, there are definitely many areas where I could improve! I could buy loose leaf tea in tins or cardboard packaging, find alternative cleaning products or make my own… as July goes on the list is sure to grow! Look out for more posts as I continue my month of being aware of plastic, and check out the #sustainablestephs hashtag on Instagram to connect with other people who are taking this challenge.