Throughout the month of November, a very special readathon is taking place, hosted by Gavin. You can find him on YouTube here and on Twitter here. Believathon, short for Believe in the Impossible Readathon, is an entire month of reading children’s books… or “middle grade” as they seem to be called these days. There are a total of ten prompts, but you can definitely use one book for multiple prompts. All Gavin is asking is that people try to read four books – one for each week in November. I, of course, am going to try for all ten prompts plus the group book (a total of 11 books) because I am nothing if not an overachiever. Here are the prompts and my choices. 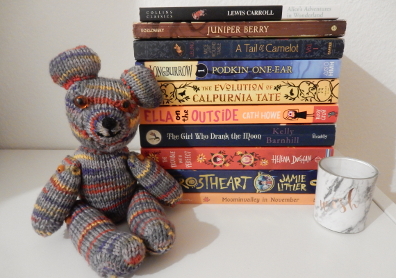 Read a book featuring magic. A few of the books on my list could count for this, but my choice for the prompt is The Girl Who Drank the Moon by Kelly Barnham. It features a girl who is accidently fed moonlight be a good witch. That certainly sounds magical to me!

Read a book featuring a myth of legend. A Tail of Camelot (Mice of the Round Table book 1) by Julie Leung. I don’t think I need to tell you which legend is featured ;-). This one sounds so much fun.

Read a book with real life issues. It took me some time to narrow this one down, but I finally decided on Ella on the Outside by Cath Howe. Ella is the new girl at school and she doesn’t know anyone, plus she is keeping a terrible secret. Then a popular girlbefriends her, but Ella is unsure of her real motivations. There’s something about a quiet girl called Molly, so I’m thinking bullying may be involved, plus whatever Ella’s secret is and the whole coping with being the new girl thing. Lots of real life issues going on.

Read a book set in the past. The Evolution of Calpurnia Tate by Jacqueline Kelly is set in 1899. That seems past enough 😉

Read a book with a strong sense of friendship. It’s always hard to tell whether there will be a strong friendship before you read the book, but I have been assured that The Trouble With Perfect by Helena Duggan fits for this prompt. This is a sequel and based on the friendship in the first book I was pretty sure it would work. I loved A Place Called Perfect so I’m excited to continue the series. (I was going to link to my review of the first book, but apparently I forgot to review it? I read it last year!).

Read an atmospheric or creepy book. I had about four potential books for this prompt, but I finally after much deliberation narrowed it down to Juniper Berry by M. P. Kozlowsky, mainly because I marked it as to-read on Goodreads in 2017! The front says “a tale of terror and temptation” and the blurb says Juniper knows something is weird about her parents and “one rainy night, in the shadowy and sinister woods behind their mansion, she discovers she’s right“. Shadowy and sinister? That sounds perfect for this prompt!

Read a seasonal book. The readathon is taking place in November so I went for the extremely literal with this prompt and chose Moominvalley in November by Tove Jansson. Based on the number on the side, this appears to be the 8th book in the Moomins series! I’ve only ever read one, but I plan to read another one before November starts.

Read a book with an animal character. Again, I had a few options for this category, but I went with Podkin One-Ear by Kieran Larwood, which was a gift from my good friend Naomi a while ago (link to her blog, but I actually know her in real life). Podkin is an anthropomorphic rabbit and the synopsis says “Middle-earth for middle graders“. The cover makes me think of the Redwall books, which I loved when I was young.

Read a classic children’s story. These final two prompts were the hardest for me to narrow down, but for this one I finally  chose Alice’s Adventures in Wonderland by Lewis Carroll because it’s been years since I read it. I read my sister’s copy when we were kids but I never actually owned it until my grandma bought it for Jan a couple of years ago (in the Collin’s Classics edition).

Re-read your personal childhood favourite. Of course, I didn’t have one single childhood favourite. I had various favourites at various ages, and whatever age I was I could never have named just one favourite book. So first I piled up all the childhood favourite books I actually have here (Charlotte Sometimes is missing otherwise I would definitely have chosen that!), then I had to narrow those ones down. I finally chose The Owl Service by Alan Garner. I loved this book and must have read it about 15 times between the ages of 10 and 13. Also, I had no idea it was originally published in 1967 – my copy is the 1992 reprint.

Finally, on top of all those prompts, I will be reading the group book: Frostheart by Jamie Littler. Of course, this book could itself fit some of the prompts – certainly the magic one, and missing parents is a real-life issue even if the setting is more fantasy.

Are you taking part in Believathon? I really think you should! Even if you just read one middle grade book in November, it will still count. For more information, follow @Believathon on Twitter or Gav’s YouTube channel (link in the first paragraph of this post).