I came across this link up on stargazer’s blog and thought it was so fun! Basically the host – Kate – assigns a starting book from which all participants build a chain, adding six books, one at a time, with each having something in common with the one before it to see where they end up.

This month, the starting book is Daisy Jones & the Six by Taylor Jenkins Reid. 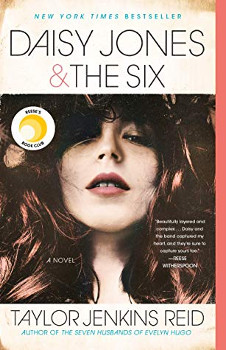 I haven’t actually read Daisy Jones yet (or The Seven Husbands of Evelyn Hugo… I know, I know. Am I even a reader?) but from what I am aware it’s about a singer called Daisy Jones and a famous rock band in the 70s. I’ve seen it compared to the actual story of Fleetwood Mac, which intrigues me. And now for my chain:

1. Starry Eyes by Jenn Bennett features a character whose father is a formerly famous punk rocker, so that’s a connection with musicians. Tentative? Maybe, but I’ll take it.

A major component of this book involves camping in the wilderness and stargazing, which brings me to…

2. Every Soul a Star by Wendy Mass. Three teens are brought together at Moon Shadow, an isolated campground where thousands have gathered to catch a glimpse of a rare and extraordinary total eclipse of the sun. Two of the three teens in the story find out that they’re going to be moving, one to Moon Shadow and one away from it, into the city, where she’s terrified that she won’t fit in.

3. Ella on the Outside by Cathy Howe is another book involving a move. Ella is new in town and is trying her best to fit in at her new school. When a popular girl befriends her, Ella finds herself dealing with blackmail and lies, and has to figure out the right thing to do.

4. What Lexie Did by Emma Shevah also has a main character who is struggling to work out the right thing to do, and the difference between being honest and telling tales. When one spontaneous, jealous lie ends up tearing her family apart poor Lexie is more confused than ever. Lexie is part of a Greek-Cypriot family and there are many descriptions of food in the book that made my mouth water, which brings me to…

5. Born Confused by Tanuja Desei Hidier. This book is about a teenager in the US, Dimple Lala, who has spent her whole life rejecting her Indian parent’s culture. But now she’s in high school and suddenly everything Indian is trendy. Like with What Lexie Did, there’s a lot of food in this book and every time Dimple’s mum started cooking I honestly started craving curries and samosas!

6. The Girl in the Broken Mirror by Savita Kalhan. Finally, I come to another book about the daughter of Indian parents who is caught between two cultures, in this case in the UK. When Jay and her mother are forced to move in with Jay’s aunt and uncle, life becomes very difficult for Jay. Her aunt is very strict about what a good Indian girl should and should not do and would absolutely not approve of Jay having non-Indian friends. But as it turns out, that’s only the beginning of Jay’s nightmare. This is a hard hitting book that absolutely broke me when I read it last year. Without meaning to spoil anything, I feel like I have to inform you that this book involves a sexual assault.

So, there’s my chain. I hope I’ve done it right! I had fun doing it anyway. Somehow all of these books are children’s and young adult fiction, which is interesting (and unintentional)!

You can see the original post (and chain) here and also find other people’s chains in the comments, where you can also add your link if you decide to join in too.

6 thoughts on “Six degrees of separation: From Daisy Jones & the Six to…”