I’m baaack! I see you’ve all been busy guessing what I’m stitching (those of you who haven’t yet should go here and do so now), and I will put up a new picture for you soon, but right now I would like to talk about rugby.

Number 20 on my 35 before 35 was to attend a world cup rugby match. I thought since it was taking place in England it was an opportunity that shouldn’t be missed! As it turned out, I actually attended three matches – all the ones that were taking place at St James’ Park (Newcastle United FC’s home ground). We got to see South Africa vs Scotland, New Zealand vs Tonga and Samoa vs Scotland. The two Scotland ones had the best atmosphere – so many Scots had come down for it that it was almost like a home game for Scotland! The best match, surprisingly, was Samoa vs Scotland! New Zealand won theirs but were fairly disappointing – obviously they ran all over little Tonga but they didn’t play nearly as well as I was expecting them to. Scotland played terribly against South Africa and thoroughly deserved the beating they got! But Samoa vs Scotland was a fairly even match and definitely the most exciting of the three. In the end Scotland deservedly won – although I was actually torn with that match as if Scotland had lost Japan – who had been doing surprisingly well during the group phase – would have gone through to the next stage. Anyway, enough talking – here are a few photos.

Waiting to kick off

Scotland scoring some much needed points 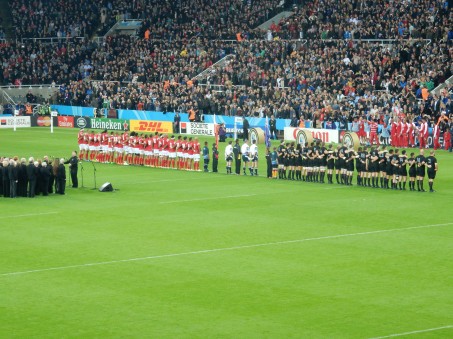 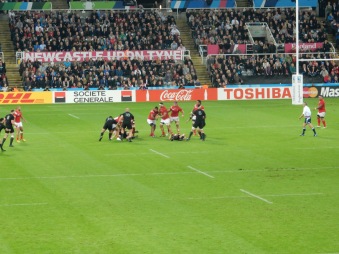 Celebrating a try – I love the facial expression!

It wasn’t always that easy to tell what was going on from the stands (especially when we were nowhere near the screen!), but all three matches were great fun to attend and I would definitely do it again!