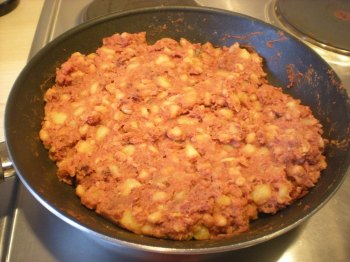 Corned beef – along with sausage rolls and toad in the hole – is one of the English meals I make that Jan likes so much he occasionally requests that I make it. In fact, I think corned beef hash may even be the only English meal that he’s made himself when cooking for the two of us (usually his fall backs are either some kind of spaghetti or chilli con carne), so it must be good.. right? 😉

1. Cook the potatoes in a pan of boiling water until they are just starting to go soft (they should be slightly less soft than if you were planning to make mashed potatoes – they’ll soften up further during the rest of the cooking process)

2. While the potatoes are cooking, heat the oil or butter in a frying pan and then fry the onions until they start to go brown

3. Add the potatoes to the frying pan with the onions and cook for about a minute, then add the cubes of corned beef and use a potato masher or fork to slightly mash the corned beef and potatoes together then stir until they’re nicely mixed through

4. Cook the onion/corned beef/potato mixture for about 3 minutes, stirring once in a while

5. Stir in the baked beans then add some black pepper to taste. You can also add some cayenne pepper and/or tabasco sauce at this stage if you like your hash a bit spicy (I used cayenne pepper only as I currently have no tobasco)

6. Spread the micture out evenly in the frying pan and leave it to cook for 3-4 minutes, so it forms a crust on the bottom. Stir in the crusty bits then repeat the process so it forms a new crust. You can do this a third time, if you want (Jan likes the crust best, so we usually do want)

7. Taste the corned beef hash to see if it needs any more spices or seasoning. You can also add some salt if you think it needs it – I tend not to as I find corned beef salty enough as it is!

And that’s it… easy peasy! Instead of the allowing it to form a crust in the pan part, you can also spoon it into a heatproof dish after stage 5 and stick it under the gril until it goes crusty on top. There are no grills in Germany, so this isn’t an option for me but I believe it’s how it’s traditionally done! You can also leave out the baked beans if you’re not into them or substitute them for a tin of spaghetti hoops. Once, when we had no baked beans, Jan suggested putting carrots in the mixture and that was quite nice, too. Basically, you can adapt it as you wish!

Recently, The Diary of Sugar and Spice had a post about American week at Aldi Süd (there are two versions of Aldi here in Germany – Süd (South) and Nord (North). The one in the UK is Süd). It was quite interesting to read an American perspective on what the Germans consider to be “American” food. If you believe Aldi Süd, they’re obsessed with cranberries and blueberries, and most of what they eat is incredibly unhealthy.

Then, yesterday, one of my colleagues sent me this link:
https://www.aldi-sued.de/de/angebote/angebote-ab-donnerstag-4-juli/

The follow up to American week at Aldi Süd is British week. Of course… what else could it be? So, for those Brits who are curious about how Germany views our eating habits, here’s what’s available on British week… (Note: They’re actually referring to the promotion as “A Taste of the British Isles, hence why Irish stuff is also available).

It’s true, we do like our fish and chips. But they don’t usually come premixed in a single bag. And what even is that fish? It looks like a larger, flatter version of fishfingers… Also, where are the mushy peas? Now those are authentically British!

This one mostly made me laugh becasue I had no idea anyone still drank Buck’s Fizz. Does anyone still drink it? I remember being allowed a very small glass of this stuff with my Christmas dinner when I was about 10 and feeling incredibly grown up for the rest of the day…

This one I will give them because we do like our lamb over on the British Isles. Buuut… where is the mint sauce? I didn’t say any of that in the shop. You can’t have one without the other! Get it sorted, Aldi Süd…
I did not buy any lamb… not due to the lack of mint sauce, but because my Aldi didn’t have any!

Oh yes, these are definitely 100% British! It is possible to get Baked Beans in Germany at any time (although not at Aldi), but usually for over a euro per tin. Aldi were selling them for only 45 cents! Yes, I definitely stocked up…

To see all the foods from the British Isles that were on offer, click on the link above. Other items from the selection included Irish whiskey, Wine Gums, Scottish Shortbread Fingers, various jams (including blackcurrant preserve. Yum yum!) and, of course, tea (including one called “Five O’clock Tea”. *Snort*).

And the foods that they were missing, in my humble opinion? Malt vinegar, Cheddar cheese, sausage rolls, back bacon, gravy granules and crumpets. Especially crumpets!!