There were no Friday letters last week because I was ill all week and had nothing to say. In fact, the only reason there were any posts at all on Confuzzledom last week is because I had written and scheduled a few while Jan’s choir was practising at our place. This is how last week looked for me: Monday I left work early with a stomach ache, Tuesday morning I went to the doctors, was told I “probably” had gastritis and given a prescription and a sick note. I spent the rest of the day in bed reading and cross stitching. Wednsday and Thursday I worked from home with a hot water bottle. Friday I went to work in the morning (I had to do something that would have been difficult from home), then left at midday and worked from home. Saturday I was feeling quite a lot better so Jan and I went to Weinheim, which means I have now completed the take 12 trips challenge! In the evening we went to see a performance of Mozart pieces at a local church. A member of his choir’s wife was singing in the church choir. Soo cultural 😉 Sunday I had a pyjama day and managed to get a few items cross stitched ready to be made into Christmas cards. I showed you some in Wednesday’s post. 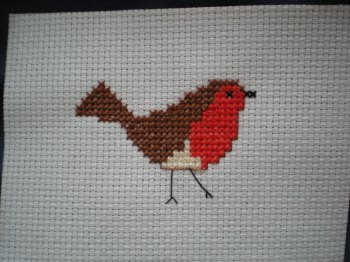 This week started with me booking another doctor’s appointment on Monday morning then sitting in the waiting room for 2.5 hours because they were so behind! Not my idea of fun. My stomach is basically okay now (it’s nice being able to eat again, although I’m still sticking to plain-ish foods) but as I was still having pain in the gallbladder area over the weekend, I went back to the docs. She reckoned could still be gastritis/referred pain from the stomach but she at least agreed to let me have a blood test! I worked from home for the rest of the day as there was no point in going in after my long wait. Tuesday I was at work. Our current intern is leaving soon, so we got a takeaway for lunch for her leaving meal. I didn’t want to risk pizza so I ordered Pizzabrötchen – little bread rolls made with the pizza dough. I chose the spinach and sheep’s cheese variety. Wednesday morning I had my blood test appointment, so I was at the doctors bright and early, then worked from home again because, again, there was no point in going in. And by the way, my arm then ached all the way until last night! Nobody told me that about blood tests! Yesterday was a normal day in the office. I phoned the doctor’s in the afternoon and was told my blood tests results had come back clear, which is nice.  Then Jan’s choir were practicing at our place again in the evening (and will be next Thursday also as the person who’s place they normal practice at is away for work), which meant I had to clean my flat like a mad woman. Between me being ill and Jan having a paper to write, it wasn’t exactly in a fit state to let people see it! I also had to go shopping so we can actually eat today it’s a holiday here in Germany, for Tag der Deutschen Einheit (German Reunification Day), and over here “public holiday” means all shops remain closed all day. So far today I’ve washed the dishes and done some cross stitch… all while still in my pyjamas 😉 Later,  we’re off to Baden-Baden for an evening of A Capella music, including a Taiwanese group we saw in Sweden a few years back. I spotted it in a local magazine and immediately pointed it out to Jan. Some other people from his choir are going too. And that’s us up to date. My life is fascinating 😉

And now for a few Friday letters:

Dear work. Thank you for being so understanding and allowing me to constantly work from home over the past few weeks.

Dear blood test. I’m glad you cam eout negative (although I feel like I’ve confirmed the nasty doctor’s opinion that I’m some kind of hypochondriac!)

Dear colleague. Thanks for the “get well” chocolate. I’m looking forward to being able to eat it 🙂

Dear fellow bloggers. I’ve been trying to catch up with everything I missed while I was ill, but if I haven’t been to your blog yet I promise to try and make it over soon!

This post is part of the Daily Diaries link up with Kate from The Lotus Collective. Click on over there to see what the rest of the blogosphere have been up to this week. Have a great weekend everyone!