After missing biscuit week thanks to work and a visitor, I decided to jump back into the linkup for bread week. I wanted to go Swiss for this bake and make hedgehog rolls like the one here, except add chocolate chips to mine to comply with the rules (and also because chocolate!). I couldn’t actually find a recipe for Igeli though, so I settled for this one for Schokobrötchen. I felt like I was cheating a bit since this recipe doesn’t involve any yeast… is it still bread without yeast? It literally has bread roll in the name though (the German means “chocolate bread roll).

My original plan for this post was to translate the recipe for you then show you how I made hedgehogs instead of bread rolls. Unfortunately, things didn’t work out quiiite as planned and I’m at least partly blaming the recipe for not telling me what consistency the dough was supposed to have… mine ended up really sticky so I had to add extra flour just to be able to form it into anything. Even the balls that the original recipe called for wouldn’t have been possible. And also what kind of oven has a 175°C setting? Mine certainly doesn’t and neither have any of the other ones I’ve used in my life!

I decided to use two different methods for the spines so that I would hopefully end up with at least some rolls that looked something like hedgehogs.,For some of the rolls, I cut the dough using scissors to try and make spines like the ones in the picture linked above. My dough was obviously far too soft though because my spines had already melted back into the rest before the rolls even made it into the oven. For the rest I used almonds… sliced almonds would have worked best, but I only had whole peeled almonds so I tried to cut them to size. It only kind of worked. 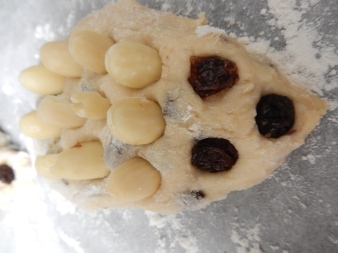 Apparently I had made me rolls too flat, so my hedgehogs ended up looking like they’d been squished in a nasty traffic accident… possibly involving a truck? And, as expected, the non-almond spines didn’t work at all, leaving me with demented mouse rolls instead of hedgehogs. 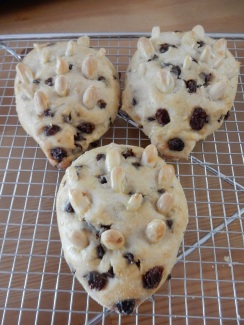 I am so far far from being a star baker! But despite looking a bit dodgy, my hedgehogs tasted delicious! Next time, I I think I will try and find a better Schokobrötchen recipe, though.

I am adding this to the link up even though every single other entry looks totally professional and absolutely delicious! After all, somebody has to be the failure of the week! (If this was the real show, I’d be the one being voted off…)

This would be a fun bake to do with kids (provided you find a better recipe than the one I used). If you go with the almond spines method, the kids could place them and turn the plain buns into cute little hedgehogs.

And now I have seven more chocolate chip hedgehogs to eat and nobody to help me! (Jan is away at yet another choir weekend)