Before Jan went to Turkey, he said that when he came back he would hire a car and we could go somewhere for a day trip.  I chose Colmar in Alsace because even after more than 7 years in Germany I still get excited about being able to just pop to France for the day. Colmar, in the Alsace region, is about an hour and 45 minute’s drive from Karlsruhe – perfect for a day trip!

The very first thing we saw when we entered Colmar was a giant Statue of Liberty. The creator of the original statue, Frédéric Auguste Bartholdi, was born in Colmar and the city put up a huge copy for his 100th birthday. I don’t have a photo, unfortunately – it was standing on a roundabout at the entrance to town and my photography skills aren’t up to taking decent shots from a moving car! 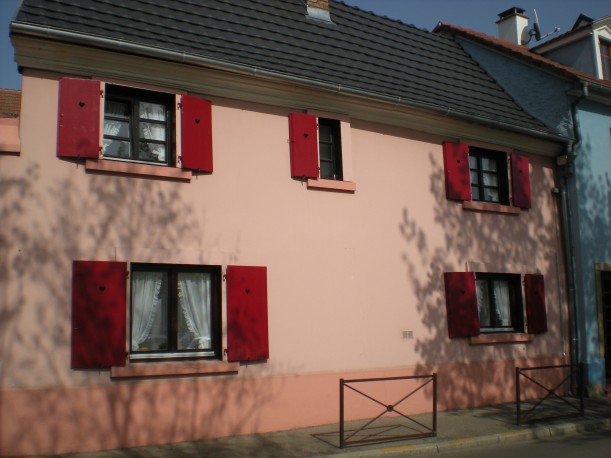 Being in Alsace, Colmar has switched hands between Germany and France several times, and the German influence is very much evident in its architecture… half-timbered buildings are everywhere! There were also lots of buildings with wooden shutters – like the one above. Wooden shutters always remind me of Austria. If I ever have a house of my own, I want some of those wooden shutters with little hearts cut out of them! 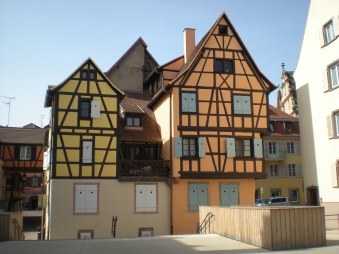 Half timbering and bright colours

I love these old buildings

Here’s the outside of the cathedral. We had a quick look inside, but it wasn’t that impressive and it was very dark, so no photos of the interior. Check out how green the little roof is though! 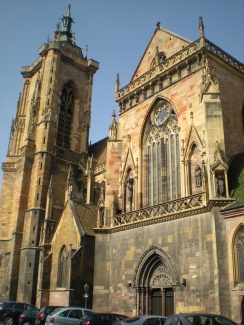 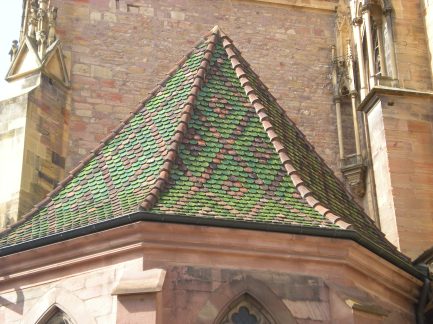 A canal runs through the entire town, albeit underground for most of the time. There’s one part of town where it flows freely though, and that area is known as Petit Venise, or Little Venice. According to a sign we read, it was christened Little Venice because of the street below, where the entrances to the buildings can only be reached by boat:

Little Venice was my favourite part of Colmar, mostly because of the water. Here are some photos of the Little Venice area:

Entrance to the Little Venice area

Walking back from the Little Venice area towards the main part of the old town, we spotted a traditional style carousel. I was half tempted to have a go on it, but didn’t. I did take a photo though. 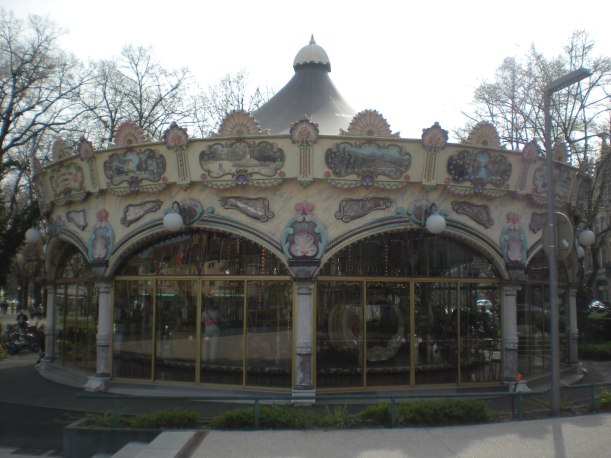 On the way back, we stopped at the Château du Haut-Kœnigsbourg. The castle was closed (it was evening by now), but the view was nice. Here’s a photo of I have no idea what… Hills mostly, and possibly Strasbourg(?) in the background.

After that stop, it was time to head home as we both had work the next day. Back in Karlsruhe, we stopped at a petrol station for Jan to fill the car up and I popped into the shop for some frozen pizzas… not having to cook was the perfect end to a lovely day out.