Happy March everyone! I can’t believe another month is over already. Today is Jan’s birthday, so tonight there shall be a nice meal and gifts 🙂

Last month I started a new series in which I wanted to share the photos I took throughout the month that didn’t warrant a blog post of their own. So, with another month now over, it’s time to share February’s photos.

Nobody needs this many (bad) photos of small birds but I just can’t resist their cuteness! 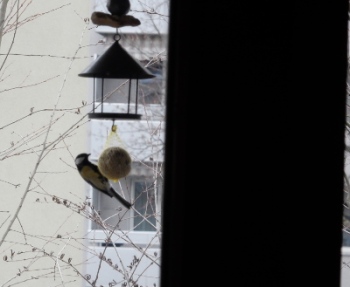 The snow returned (briefly) and I discovered once again that it’s really hard to take photos while snow is actually falling from the sky!

The photo above was taken on a Friday morning. The sun came out in the afternoon and melted everything that had managed to settle… and would you believe the next day was bright sunshine and highs of 12°C? The weather has been so confusing lately!

I had a week off at the end of the month and on a particularly sunny day I went for a walk into town (and beyond). It was 22°C that day. In February! I mean, it was nearly March, but still… 22°C! 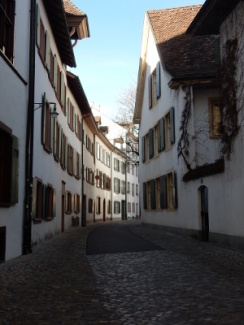 There were signs that spring was approaching! Can you spy the bee below? 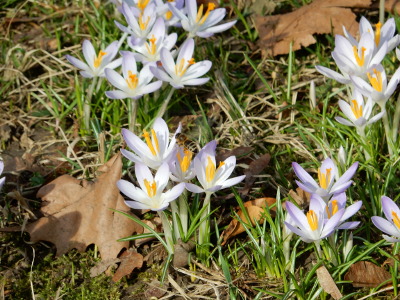 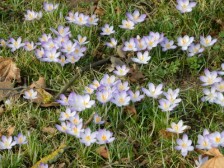 I walked all the way to the Birsfelden hydroelectric plant, which means nothing to you so you’ll just have to trust me that it was a reasonably long walk 😉 2km further and I would have been in Germany, but instead I decided to cross the river and head back since it was getting on for 3 p.m. and I still had to cook tea.

Look how blue the water is? Aah, I love living here!

And, to finish off, a yummy treat! Jan and I finally made it to the chocolate café I’ve been saying I want to go to ever since we moved here. I don’t even care that I went way over my calorie limit for that day -it was so, so worth it! Chocolate heaven ❤ 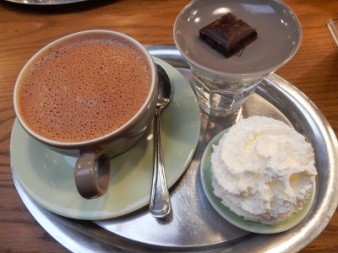 And that was my February in photos. Tomorrow there will be a proper February recap post – with less imagery and more words (the type that end with -ing 😉 )

Well, the flat-warming-slash-birthday celebration thingy was a success. Jan made guacamole, which was delicious (and also happens to be one of the things on his 101 things list – yes, he’s doing one too). Almost all of my chilli was eaten, and two people even took some home in tupperware tubs so it must have been good. And I made flat-warming cake, which I am now going to share with you, my internet pals, because it’s just too damn good not to. It is also my entry for the cake category of the Belgian Waffle Village Fete and believe me, it beats aubergine bee hands down.

Picture number one shows the basic cake, prior to icing. It was supposed to be chocolate cake. It looks more like my Grandma’s Yorkshire Parkin… all dark and sticky. I blame this on the random German syrupy stuff that I used in place of golden syrup. (Note to people living in Germany – if you replace the golden syrup in a recipe with Grafschafter Goldsaft it will not turn out like you’re expecting. Trust me on this one!) Also, notice how thin it is. I expected it to rise more than that, but apparantly using extra baking powder in the absence of self-raising flour (which doesn’t exist in Germany) does not work. Who knew?

Stage 2 in the cake making process… chocolate butter icing. I had to add extra cocoa powder to mine because it was far too ridiculously sweet, even for me. The recipe called for 175 grams of icing sugar with only 75 grams of butter and two table spoons of cocoa powder. 175 g of icing sugar is just insane!

And now for the moment you’ve all been waiting for… the finished product.I give you Flat-Warming Cake… or what happens when you let a person with no artistic talent whatsoever loose with M&Ms, little sugar stars and the mini breadstick things from those nutella dip cartons…

It’s supposed to be my building, except one floor is missing because I ran out of space. My flat is on there though – the white window at the top. Also, check out my flower. And my tree. I am totally proud of them… in a half-amused kind of way.

It seems it’s Wednesday again. I’m not sure how mind – wasn’t it only just last Wednesday? Like right before I blinked my eyes? Hmm, well it seems the world is continuing to spin on its axis even if my brain can’t keep up and it is, indeed, Wednesday again. And that can only mean one thing… Question time!
Here we go.

1. Would I die if I boiled washing up liquid?
Yes, definitely. A horrible, painful death brought on by the poisonous fumes of evaporated washing up liquid. Either that or you’d be murdered by the next person to use the kettle. It’s just not worth it.

3. Things to write about when bored.
– Purple monkeys
– Chocolate cake
– Spaghetti monsters
– The inhabitants of an imaginary island
– A haunted suitcase

4. How to get rid of a nervous headache.
Aww, the poor thing’s so nervous it had to hide inside your head. Try reading aloud to it from “The Little Book of Confidence”.

5. What to do if you miss the tram.
I suggest you panic. It’s what any sensible person would do. Alternatively you could learn to fly. Or just wait for the next one.

6. What to do when you’re bored of paper.
Go retro and start using a slate instead. They’re about due for a comeback anyway.

7. Is 25 still young enough to be naive?
I certainly hope not, cos if it is I’m screwed.
No, wait, not true. I’m not naive. At least I don’t think I am… am I?
I have to go and listen to the Kooks now – Naive is now playing inside my head and it sounds sooo much better when they do it!

It took me an hour and a half to do my hair last night. I just don’t have the kind of hair that you can do things with. It’s incredibly thick, which hairdressers will tell you is a good thing, but it’s not. Next time you’re in a place that sells hair accessories take a look and see how many of them have a little sticker saying “for thick hair”. If you manage to find more than 3 it will be a miracle. If more than 1 of those is not ugly please tell me where that shop is, I need to go there right now!
Anyway, last night. I knew I couldn’t leave it down, not for a posh restaurant, so it had to go up. My first attempt took 10 minutes and a dozen hair clips. From the front it looked ok, but then I saw the back. It was a mess. So down it came. I then tried putting part of it up and leaving a bit down at the back. It didn’t work. At all. Six tries later I was sweating, exhausted and frustrated, but at least I’d managed to get my hair up. By the time I’d managed to get my make up done we were running late and had to rush into town. Rushing in sandals with heels isn’t good. I now have blisters on the balls of my feet, which hurts a lot and makes it difficult to walk, I won’t be wearing those shoes again for a while! It was worth it though, the rest of the night was amazing!

When we arrived at the hotel we were first shown to our room. Yes, we had a whole room all to ourselves! The nice waiter man took our jackets then suggested that we head over the the bar for some aperitifs. They called it a bar, and there was indeed a bar at one end, but the room itself looked like something in a stately home. It was amazing! Portraits on the wall, nice carpets and posh armchairs everywhere. Wow! We ordered our drinks, which were incredible. I had a cocktail of champagne with strawberry liquer and strawberry juice. To go with our drinks we were rought some hors d’ouvres. Little pieces of bread cut into circles and squares with tiny but perfectly arranged toppings. Fabulous.

After the appertisers we headed back to our room. We were served our starters and the wine expert came by to advise us on what to drink. We started with a sweet white wine that tasted almost like lemonade. Later we switched to a dryer white wine, which I then stuck to for the rest of the night. There was also a red wine to go with the later courses. I tried the red wine but didn’t like it. The starters (can’t remember what they were) were followed by foamed goose liver pate with goose mince arranged on top of it. It tasted a lot nicer than it sounds! Next came the fish course. We had kingfish fillet, which I really enjoyed. Then came something that was called “Flusskrebs” in German. I’ve just looked it up and found out that means crayfish, so there you go. It was quite nice anyway, but I couldn’t have eaten too much of it. Good job posh portions are only little! After the crayfish came the part I had been waiting for all night. Meat! It was ram I believe (trying to translate from the German here). I usually prefer my meat well done, and this was only medium, but it actually tasted incredible. All of these courses were served by 3 or 4 waiters at a time, who then placed the plates in front of us all at once. Before each course our waiter came in and explained what we were about to eat.
The meat was followed by cheese, which was brought in on a huge trolley. A waitress explained what was on the trolley and then put together a selection on a plate. This took a while as she had to do it for each of us individually. And finally we had pudding – a gorgeous chocolate cake, followed by coffee (I had cappucino), little chocolate covered fruit sweets (the waiter insisted that everyone had to take at least one) and finally some liqeur. We all chose a pear one which came from Vorarlberg in Austria. I had to go for that one of course because I used to live there. I was told that the final bill came to over 2,000 euros. Wow! Jan insisted on paying for my share. I have such a wonderful boyfriend 🙂

So that was my posh night out. I would definitely recommend everyone to do it at least once, it’s an amazing experience. And I found out this morning that Baden Baden and Brenner’s Park Hotel are on the list of 10,000 places to visit before you die. Only 9,999 places to go then 😉