Saturday was another photo an hour day with Jane and Louisa, and unlike August’s incredibly boring day, it turned out to be quite a busy one. 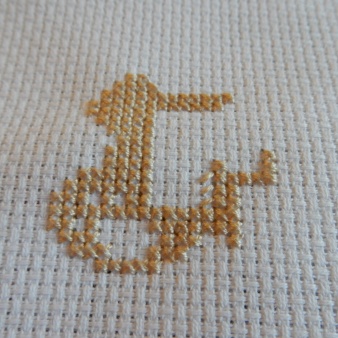 8.30 a.m. Has a photo an hour ever started so early? Tea is definitely needed this morning!

9.30 a.m. Cross stitching while waiting to see whether Jan is going to get up so we can go through with our plans for the morning…

10.30 a.m. Ready to leave at the exact time we had said we would! (Jan was in the shower at this point, despite being the one to suggest the time). Photo taken free-hand without being able to see what I was doing! The first few attempts mostly contained the mess in the background and very little hair slide 😉

11.30 a.m. Queuing for a crepe at the Spalenberg brunch (all the shops in one area had little food and drink items so people could put a “brunch” together for themselves) 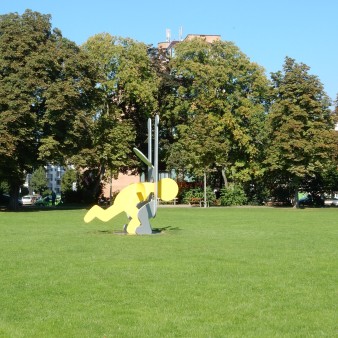 12.30 p.m. We gave up on the brunch after Jan almost got guilted into buying a shirt and bought something from a baker’s instead. This is an apple, cinnamon and hazelnut “snail”

1.30 p.m. Hanging out at the park for a while until it’s time to meet some people from Jan’s choir for a tour. 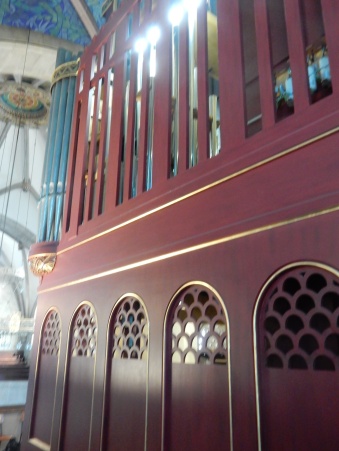 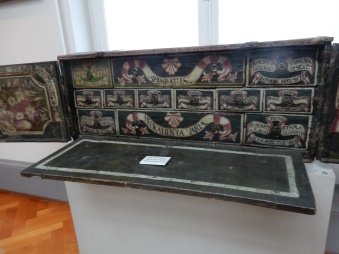 4.30 p.m. There was a special exhibition at the Pharmazie Historisches Museum (Pharamcy Museum) for Erasmus year that we had been meaning to go and see and Saturday was the last day. The above picture is part of the ordinary exhibition.

5.30 p.m. Enjoying the early evening sun down by the river… hanging out with the ducks.

6.30 p.m Time for some food! Yes, I know that’s beer. Food was ordered but hadn’t yet arrived.

7.30 p.m. Off to the cinema! We watched a series of short films focussing on disability as part of a film festival. 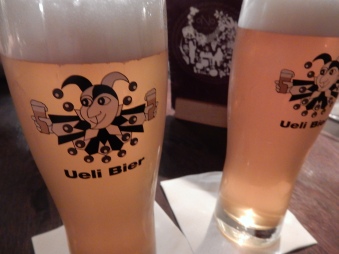 After that I went to bed. No more photos would have been possible anyway… the symmetry must be maintained 😉

How was your Saturday?

Today has been a looong day, or at least it seemed that way. Actually, I only worked for half an hour longer than I should have, but I’ve wanted it today to be over pretty much since I got up so time just seemed to go on forever.

We went to the cinema last night to see The Imaginarium of Dr. Parnassius (the film Heath Ledger was making when he died). It was a little bizarre – which I guess is to be expected seeing as Terry Gilliam wrote and directed it – but I thoroughly enjoyed it. The showing we saw didn’t start til 9pm though, so it was late to bed and early to rise for me. After having a terrible night’s sleep the night before I was already ready for my bed before we even went to the cinema so you can imagine how I felt when it was time to get up this morning! I would have loved to have closed my eyes for a bit on the train to work but instead of my ICE they sent an IC (smaller and slower!), meaning not everybody was able to get a seat. Of course I was not one of the lucky few. Then I arrived at work to find that one of our customers had sent a complaint about part of a huge job that my colleague and I are working on, so I’ve spent most of today trying to sort that out in between finishing my other translation and squeezing in a rush job that had to be translated, proofread and sent out within the space of 6 hours. You can see why I want this week to be over (although the weekend is not looking much better from where I’m standing – Jan’s away and I really, really need to get something done for my dissertation. It’s hardly an opportunity to rest and recover…)

Sometimes I wonder why I bother writing new blog posts. Everything I have to say has already happened to me a some point anyway. I might as well just post a link to a previous blog post and let you all read that instead.
But, of course, we all know I could never do that. So you’re just going to have to put up with the fact that my life is incredibly repetitive. Ha!

So the boyfriend is at his choir thing, which is apparantly not a competition at all. It’s just something that choirs can turn up at and sing. Or something. To be honest I don’t even know where it is, never mind what it is, which probably say something about how much we’ve been communicating lately (I didn’t even know until Friday that it was happening this weekend!)

Last night we went to see Up. Very good film, and not just for kids. The story was brilliant. It made me cry though. Grr, I hate crying in the cinema! But at least I wasn’t the only one… I saw at least two other people rubbing their eyes. We went to the 9pm showing, so obviously there were no kids around. Instead the entire room was filled with couples (apart from one middle-aged man at the end of our row who seemed to be alone). I wonder how many of the guys actually wanted to go and see that particular film? 😉

Anyway, despite yesterday’s good intentions I still haven’t managed to clean my flat (no surprises there then) so I’m off to do it before I think of any more excuses to put it off…
Hope you’ve all had a great weekend!

Just a quick blog post today cos I have to go out in a minute. I’m meeting Jan and some friends to go the cinema.

So, I disappeared for a few days there. Here’s why:
On Thursday I went to the bar here in my student residence for the first time in.. oh, I don’t even know how many months. I got incredibly drunk on way less alcohol than it used to take me to get incredibly drunk. Clearly I am becoming a light weight in my old age. *Sigh*. I finally made it to bed at 5:30am, waking up poor Jan in the process. Actually it’s entirely his own fault – nobody made him stay here that night! I then slept until about 1:30 yesterday afternoon, ate a huge bowl of potato croquettes and spent the rest of the afternoon lying around with a book. In the evening I headed over to Jan’s where we ate spaghetti bolognese and watched a film with his flatmate. I have no idea what the film was called. This random group of people who wanted to be profilers have been sent to an island to complete a test. Something to do with simulations of murders and they’re supposed to try and make a profile of the killer. Except there turns out to be a real murderer on the island, and members of the group gradually start dying. It was… interesting. Weird and confusing but definitely interesting.
And today I went to look at a flat. One room for sleeping/living, a separate but very small kitchen and a tiny bathroom (no bath, just a shower. Does it still count as a bathroom then I wonder). The landlady is supposed to make a decision tonight because the girl who’s moving out wants to hand over the key tomorrow, so we’ll see. If all goes well I may have a flat by this time tomorrow. Fingers crossed please…
And now my time off is pretty much over. Tomorrow is Sunday and the day after that I’m back at work. The four days have gone by so fast.
But it’s February tomorrow so no more January blues. Hurray for that!

What have I done this weekend?

* slept late
* met a friend for coffee and crepes (we discovered a yummy crepes place in Karlsruhe – actually I already knew it was there but didn’t know it was yummy)
* went to see Wall E with the boyfriend. I really enjoyed it. Basically a typical animated pixar film, but still good, and does make you think in a way (what would happen if we really did cover the Earth in so much rubbish it became unable to sustain life?)
* had a random conversation with the boyfriend about commitment or lack thereof and how unfair it is that he makes me happy way more often than I make him happy, and why does he stay with me anyway when I rarely make him happy and clearly am not what he wants, although actually he doesn’t know what he wants, except that he doesn’t want to commit to me, but maybe I could be want he wants if only I wasn’t so sarcastic/childish/pessimistic/obsessive/socially inept/generally a crap girlfriend. (Could that just have been the longest sentence ever?)

So that’s me. Did you all have good weekends?

I’m going to do some uni work now. But not until after I’ve written a letter to a friend. I wouldn’t be me if I didn’t find some way to procrastinate.

Last night Jan took me to see Sex and the City. I thought it was good, but not brilliant. It was basically a 2 and a half hour version of one of the episodes. Itt went on far too long for my liking (after 2 hours I was wondering whether it would ever end!), but I suppose there were a few loose ends to be tied up. The ending was incredibly predictable (of course they were going to get married. It just wouldn’t be SATC without the happy ending). There were a few good one liners. I’m glad I saw, but don’t think I’ll be buying the DVD. And is it just me or does Sarah Jessica Parker look old?? I know she’s not in her 20s any more, but seriously, she’s looking haggard these days!

By the time the film finished we were starving, so we went to a restaurant called Italy Italy. Guess what kind of food they sell? I had some gorgeous lasagne with Bärlauch, which leo.org tells me can be translated as bear’s garlic, wood garlic or wild garlic. It’s green anyway, and yes slightly similar to garlic. Jan had a huuuge pizza thing. It was one with the filling in the middle, so I was expecting something like a calzine (normal pizza folding in half) but what turned up was this huuuuge round thing with an inflated bit in the middle where the filling was. It kind of looked like a flying saucer made from pizza dough. Interesting. It must have been huge cos even Jan couldn’t eat it all! I’m not sure I’ve ever seen him leave food on his plate in the whole 4 and a bit years we’ve been together. So to sum up, Italy Italy in Karlsruhe does very nice meals with huge portions at reasonable prices. Aah, I shoud be a restaurant critic (hahaha).