I almost missed the photo an hour link up this month! Luckily I went on Twitter and saw that Sharon was doing it. As a result, my first photo was not taken when I got up, but half an hour later… and I ended up doing photos on the half hour instead of the hour. I took part on Twitter this time, but I also wanted to record it on my blog.

Jan had to go into work for a special project/organisation meeting thing, so I was alone all day! Here’s what I got up to:

11:30 a.m. It looks grey and miserable outside, but I need to go to the post office and food shopping, so out I go. 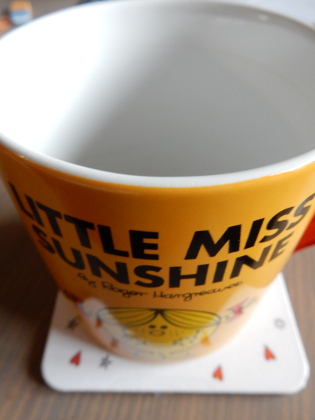 12:30 p.m. Shopping done, heading home through the park. But where are all the children? It might have been grey, but it wasn’t raining or all that cold! DO people here take the midday quiet time that seriously?

1:30 p.m. Aaah, there’s the tea that no photo an hour would be complete without! (Well, a cup that once contained tea anyway.) Lunch done, cuppa drank. Now what? 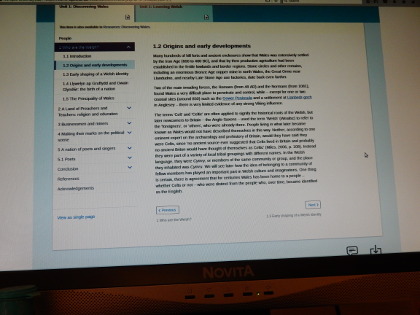 2:30 p.m. Thought I’d better actually do a bit of my OU course while I didn’t have any other commitments. Discovering Wales and Welsh for those that were interested. It’s a not for credit short course that you have 6 months to complete. I want to do a proper Level 1 course, but the Europe price is way too expensive!

3:30 p.m. Enough studying for a Saturday! Another cuppa while I leaf through cross stitch magazines for card inspiration. 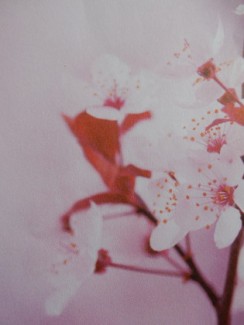 4:30 p.m. Suppose I’d better do something useful! Emptying the dishwasher.

6:30 p.m. Watching Come Dine With Me – my guilty pleasure TV show. It’s total trash, but I love it. The narrator makes it for me!

7:30 p.m. Another episode of Come Dine With Me. (And an awful picture! I forgot to take one with my camera and the computer refuses to acknowledge my phone so I had to re-download this one from Twitter!) 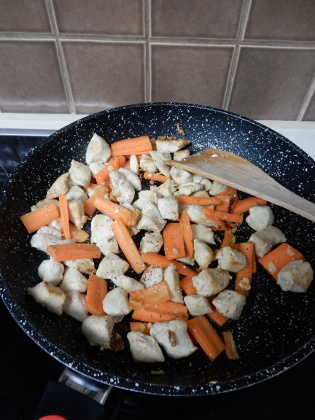 8:30 p.m. I had been waiting for Jan to let me know whether he wanted tea, but he apparently got stuck talking and forgot to message me. By 8:30 I was starving so I decided to just cook anyway!

9:30 p.m. Pyjamas time! Also note the confetti that is somehow still in my flat even though I’ve hoovered several times since Fasnacht! 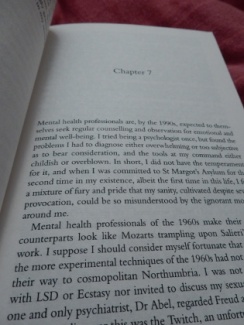 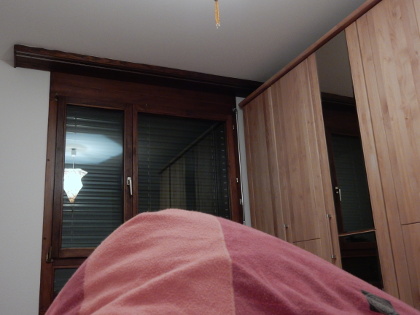 10:30 p.m. In bed with a book. Once I’ve read this I’ll have completed the bonus round for Erin‘s reading challenge!

11:30 p.m. I’m off to sleep! There’s just time for one more photo of the view from my bed… purely to preserve symmetry, obviously 😉

And that’s it for this month. How was your Saturday? Did you do anything interesting?

On Saturday, I took part in the August edition of A Photo an Hour with Jane at Is That You Darling? I am being cheeky and also including this in Amanda’s Day in the Life linkup for August.

9 a.m. I was actually awake at 8:30 (thanks construction workers!), but somehow I find it easier to take my photos on the hour(ish), so I waited til 9 to take my first one. A nice cup of tea to start the day!

10 a.m. Doing a bit of cross stitch! I’m working on something for my kitchen as part of my 35 before 35. Can you guess what it is yet? 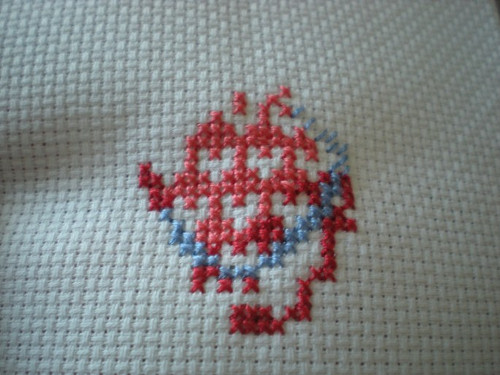 11 a.m. I noticed it had stopped raining, so I decided to head into town while I had the chance! (I promise I didn’t go out smelly – I showered and brushed my teeth between the last photo and this one!) 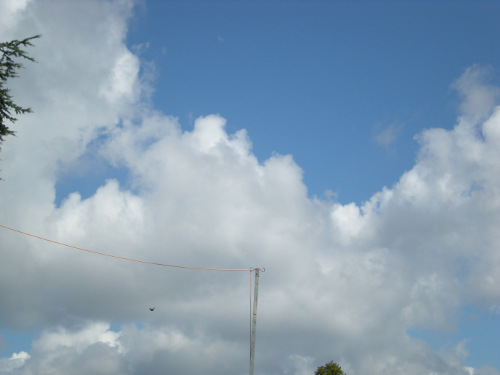 12 noon. Still in town. My dad paypalled me some money for my birthday, so I decided to pop in to Douglas and see if I could find a perfume I liked. (Is to paypal actually a verb? Never mind, it is now!) Am I the only one that would rather browse in peace than constantly be asked if I need help? After two shop assistants approached me, I decide to leave the shop and head elsewhere for my perfume… which turned out to be lucky because I found a special offer with a 30ml bottle of perfume and some shower gel for just €29.95. The perfume on its own would have been something like €45! 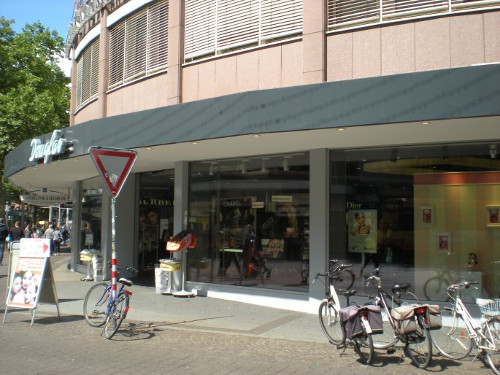 1 p.m. Time to head home for lunch. Pictured is the Natural History Museum, which I passed on my way home. (Also, note the grey clouds returning… definitely time to head home!) 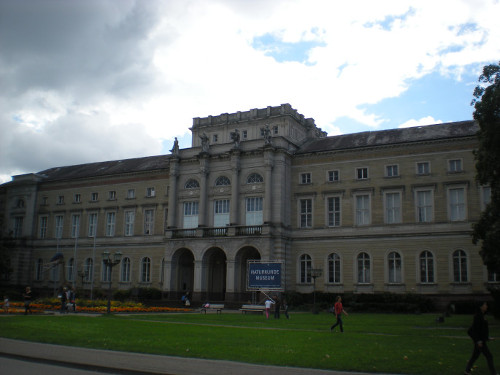 2 p.m. Wrapping gifts for a few children whose birthdays are coming up. This one is for a friends son and I also wrapped stuff for my little brother and for my godson (although his won’t be posted til I return from Taiwan).

4 p.m. I finally managed to post the last of my Vienna posts. Hurrah! Next up is all the travelling I did with my brother (I’m sooo behind!).

5 p.m. Enough lounging around… time to make a start on tidying the kitchen! Here’s a photo of my hoover, plugged in and ready to go. 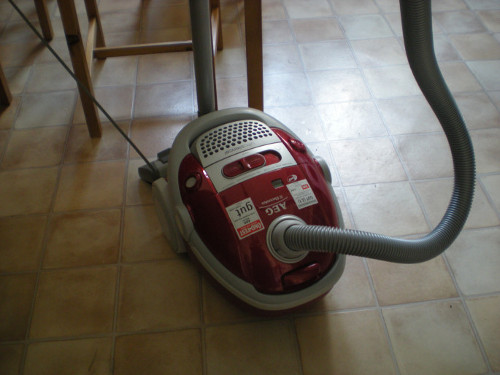 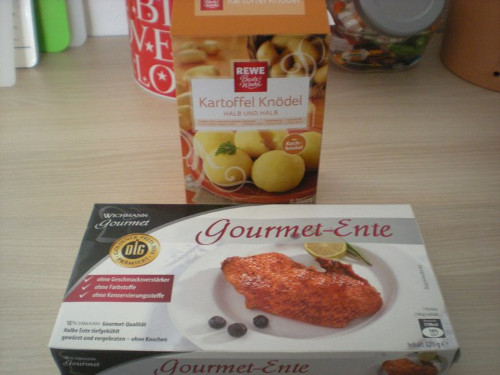 7 p.m. Having made the (possibly insane?) decision to cross stitch all my Christmas cards this year, I got out all my cross stitch magazines and started going through them looking for ideas. 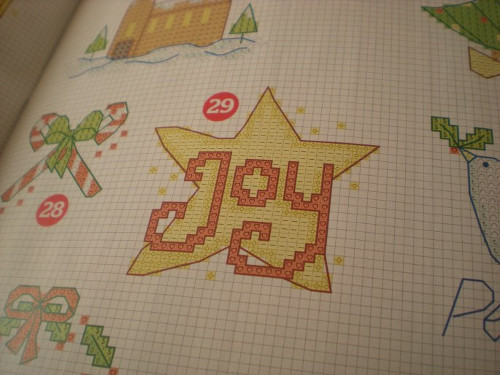 8 p.m. What Saturday evening alone could be complete without a classic film? 😉

11 p.m. Off to bed with the final book I need to finish for the summer reading challenge! I’m progressing through it… but verrrry slowly!

Yesterday, Jane from Is That You Darling was again asking people to join in with taking a photo an hour. At the same time, Manda from Break the Sky is hosting a “Day in the Life” link up. Her actual “Day in the Life” date was 14 January, but she invited those who didn’t record their day then to add themselves to the link up at any time until the end of the month. A chance to participate in two link ups at some of my favourite blogs couldn’t possibly be passed up! And so I give you the most boring Saturday ever. 😉

Not all of my photos were taken exactly on the hour, mostly because it’s not always possible for me to do that. I’d like to see you try to take a photo while wandering round Aldi with 2 carrier bags in one hand and a shopping basket in the other (which is wgat I was doing when I should have been taking my 3pm photo…)

11 a.m. (ish): I managed to hit off on my alarm instead of snoozing it, so I stayed in bed way longer than I was intending to. I’m up now, though, and it’s breakfast time. 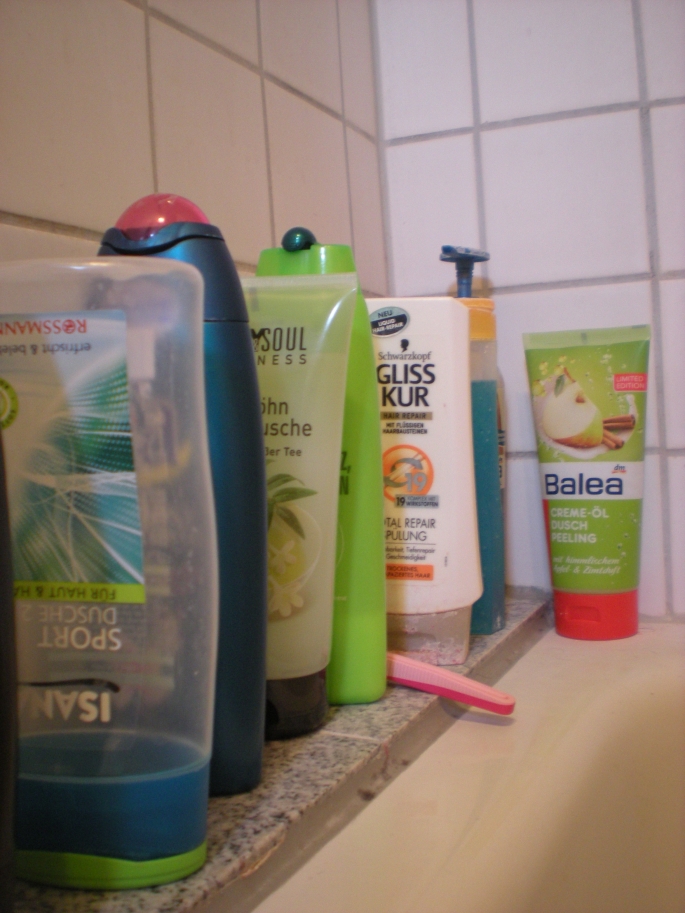 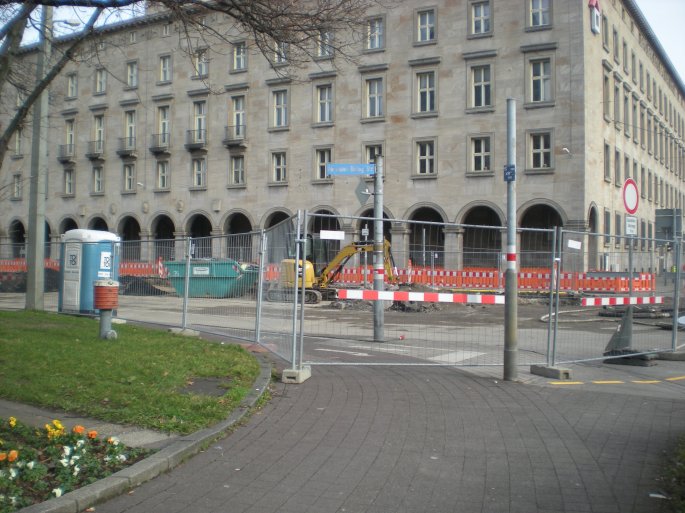 2 p.m.: In town. A fairly crappy photo because I was trying not to include any people in the picture (there are laws against such things in Germany…)

2:10 p.m.: A bonus photo! I once told you that German dogs can go everywhere, including into shops, and I couldn’t pass up the opportunity to provide evidence! Photo sneakily taken with my phone so the owner wouldn’t get mad. 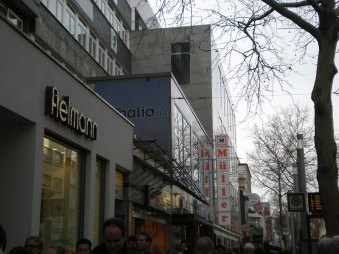 3 p.m. Just one more place to stop at then I can head home with my way-too-many bags of things I never intended to buy…

4 p.m.: Time for the football! Checking out BBC Sport’s pre-match information on my phone. (We won, in case you care. And by “we” I mean Newcastle United). 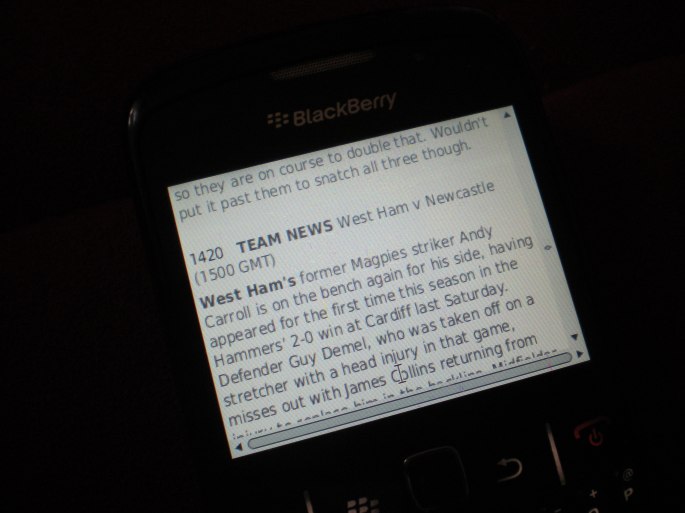 5 p.m.: Half-time cuppa! Tea is a perfectly normal beverage to drink during a football match, right?

6 p.m.: Time to do some tidying. Desperately attempting to sort out the chaos that is the desk in the spare bedroom…

Somehow I missed my 7 o’clock photo, so instead I give you 8 p.m. (ish – my phone said it was 8, but my camera seems to imagine it was 10 to?).
Off back out because I forgot to buy washing powder and bread! 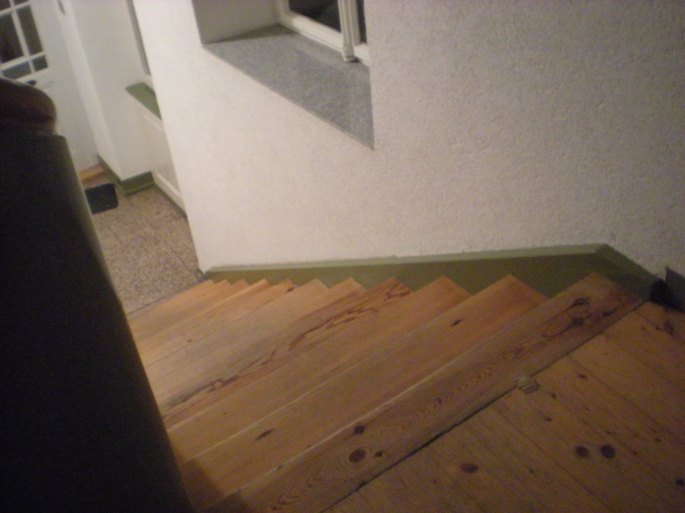 9:15 p.m. I decided to take a bonus photo to make up for missing out 7 o’clock. Hoovering the kitchen while it’s still early enough. (My neighbours are actually nice and not the complainy type, but I still like to get the hoovering done while it’s “officially” allowed.)

10 p.m. Time to wash the dishes – my most hated household chore! (With the possible exception of dealing with Biomüll)

11 p.m. Flicking through some old cross stitch magazines for inspiration – I want to stitch my grandma a card for her birthday. 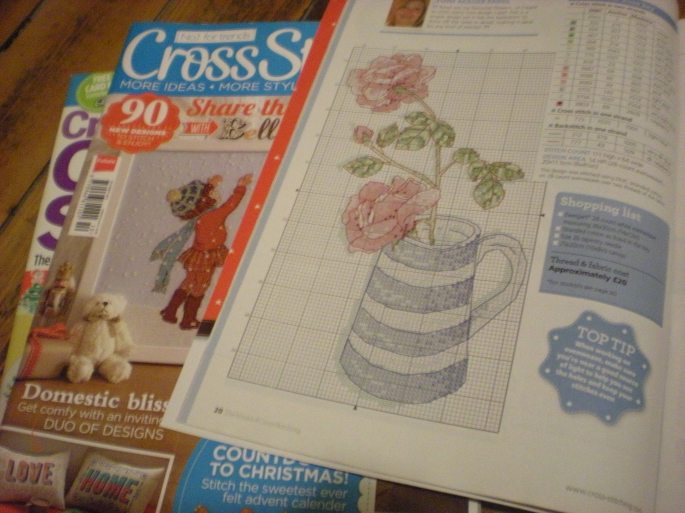 Midnight: Bed time! I wasn’t going to include this photo because it’s terrible (and boring), but you might as well have it…

And there you have it! There’s still time to take part in January’s A Day in the Life with Break the Sky (or wait til 7th February and join in with the next one), and you can check out Is That You Darling’s blog post (link to follow once the post is up) to see other people’s Photo an Hour posts.

I was cross stitching a wedding sampler kit for my pen friend, who is getting married at the beginning of June. But then I messed up the picture to the extent that I’m not sure I’ll have enough thread to complete it. Fail!! And, of course, the thread the kit uses is not Anchor – the only kind I can buy here – and ordering extra would take too long. So I turned to my trusty magazines. I am now stitching this:

Here’s where I’ve got to:

I’ve a long way to go, as you can see. I will also be adding the names and date.

With just over a week to go before  I have to get this in the post, I’m going to be spending all my spare minutes frantically trying to get it done. So if I don’t manage to update my blog regularly, that’s where I am…

Jan had to leave for his dissertation conference thingy at 5:30 this morning (yawn!), so I am now boyfriend-free for a whole week. Of course,most of that time will be spent at work, but for today it’s just me and the flat. Her are my plans for the day:

A whole pot of tea and some biscuits all to myself. No need to share! 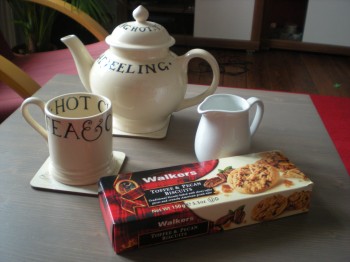 Two new cross stitch magazines for me to read – and pick out projects that I’ll probably never get round to stitching! 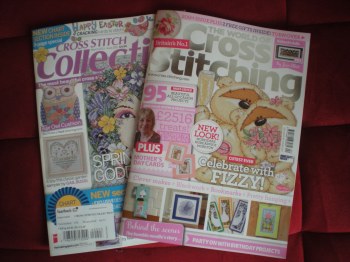 A selection of my favourite music playing on my BlackBerry!

(By the way, it’s incredibly difficult to take a photo that actually shows which song is playing rather than just the reflection of my face/the camera/the ceiling…)

Staying in my pyjamas, fluffy socks and slippers all day!

And just because it’s so cute, have a bonus picture of my teapot dressed in an owl tea cosy:

Later, I shall be starting my spring clean, but for now it’s time to relax and enjoy having the place to myself.
Have a great Sunday everyone!