Yesterday, someone I went to school with passed away. This is actually already the second death of a person from our year group this year (and we’re not even 40 yet!), but the first was someone I never had much to do with. This woman is someone I hung around with in sixth form… I helped her get together with a boy she liked, who she later went on to marry and have children with. He’s now her widower, which is so weird to type. I knew she had been in hospital recently, but just a week ago, in response to someone offering to visit, she said she would be going home the next morning. From comments, I see that people who are in regular contact with her thought she had been getting better.

I don’t want to hijack her family and friends’ grief, which is why I’m posting on my blog (which, as far as I know, only one person from school actually knows about – and she wasn’t in our year). Having left that town as quickly as I could after high school, I hadn’t actually spoken to this girl in person since leaving sixth form, so I can’t claim to be devastated by her death. I was, however, shocked to read about it. We communicated occasionally on Facebook. I enjoyed looking at her photos of her (still quite young) children. So for her to just suddenly be gone, after such a short illness, has really brought home to me how short life is and that we really do never know what’s just around the corner. I may not have everything I want in life, but I am alive and I am healthy. It shouldn’t take the loss of someone else to remind me of that.

I wanted to insert some meaningful quote here, but I can neither think of nor find one, so I will just leave it at that. Life is precious, friends. Don’t take it for granted.

Katyboo tagged me for this meme days ago, but as you can see I’m only getting round to doing it now.
The idea is that you open the fourth folder of photos on your PC, take the fourth photo from that album and post it on your blog. Then I suppose you’re meant to talk about it – at least that’s what everyone else has done.
I was a little afraid I might have to cheat on this one. You see, most of my photos are of people I know – family, friends, people from my student residence… that sort of thing. And while I don’t mind writing about my own life I do draw the line at posting photos of people on the internet without their knowledge (I don’t even use people’s full first names on my blog, unless they’re really, really common names meaning they could be anybody). As it turned out I didn’t even have to do any cheating. Photo four from album number four was this: 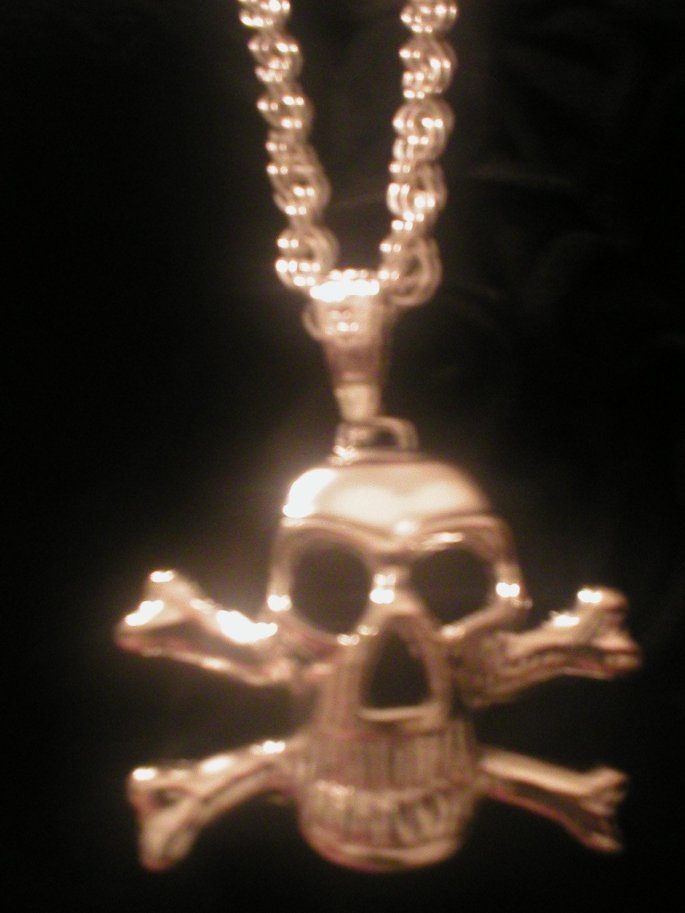 I’m sure none of you need me to tell you that “this” is a photo of a skull and cross bones necklace. What you may, however, be wondering is why.

It’s part of my Halloween costume from 2007. I went as Susan Sto Helit. I had a half black, half white wig that I rearranged a bit to make look white with a black streak. I wore a long black skirt, long sleeved black top and a lacy kind of cardigan, black lipstick and lots of black mascara. This necklace was something I had discovered that very day in a one euro shop and decided it would be the perfect accessory for my costume. I thought I did a good job. Unfortunately nobody managed to figure out who I was. Most of you are probably asking yourselves who Susan Sto Helit is as well**. *Sigh*. Where, oh where have all the Terry Pratchett readers gone?
I’m not entirely sure why I took a photo of the random euro shop necklace part of my costume. But for some reason I did. Maybe I knew even back then I would one day be called upon to find a fourth photo in a fourth album that was hopefully not a picture of one of my friends…

** Just in case any of you actually is wondering who Susan Sto helit is, she’s Death’s granddaughter in the Discworld novels. Yes, I said Death. Huge skeleton, walks around with a scythe, that Death. Obviously she’s not his real granddaughter. She can walk through walls though. Look, you’ll just have to read the books. It will all make perfect sense then.