For the final day of my brother’s visit, Jan, my brother, my friend K and I headed to Frankfurt am Main, or – as the Germans jokingly like to call it – Mainhattan (because it’s on the River Main and has “skyscrapers” – although nothing compared to the ones in the actual Manhattan, I’m sure!) Our first stop was the German Film Museum. My brother is a Film Studies graduate, so I thought he might enjoy this museum – and I was correct. He told me afterwards that it was nice to see all the equipment in “real life” rather than just as pictures in a text book! The first floor of the museum is all about the history of film and moving pictures, and there are various replica items that you can look through, try out, etc. Upstairs, there’s a bit about actual films with information about various techniques, music, etc. and some computers where you can edit a film sequence yourself or play with music. Finally, on the thrid floor, is a special exhibition, which was about surrealism when we were there. The entire museum was very interesting and we ended up actually having to rush the last floor because we’d booked somewhere else and were going to be late! 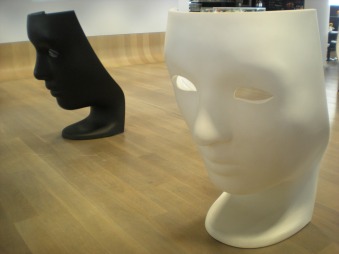 These chairs were in the lobby of the Film Museum – I found them interesting!

Chairs in the Film Museum

After the film museum, we had a booking for an English tour at the Frankfurt version of Dialog im Dunkeln (Dialogue in the Dark). Some of you might remember me writing about my experience with the one in Vienna (if not, you can read it here.) It seems Frankfurt is the original. Here’s a photo my brother took showing the various Dialogues around the world: 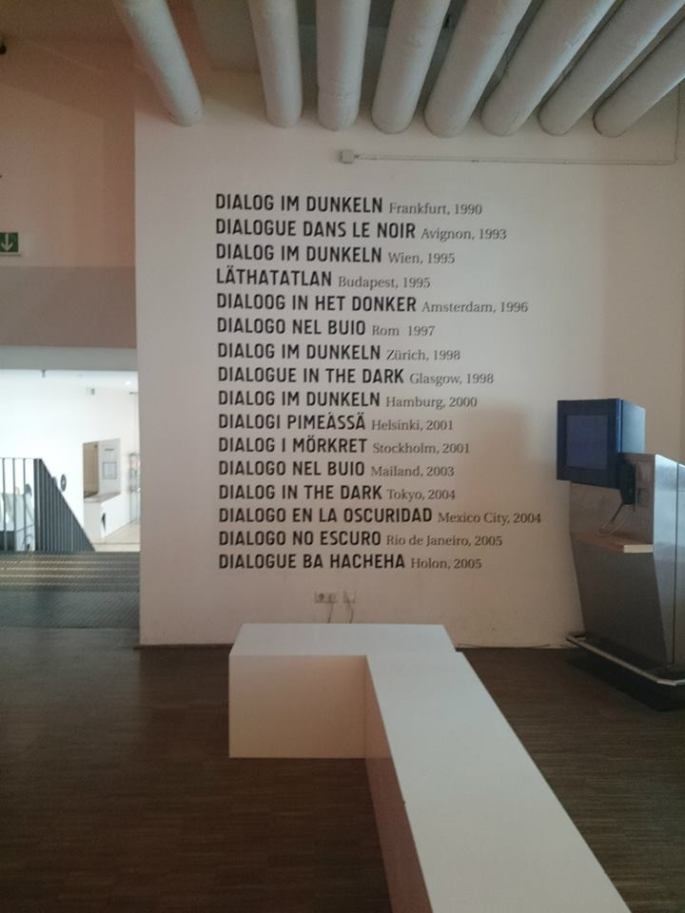 If there is one near you I can highly recommend it! I preferred our guide in Vienna, but the experience in Frankfurt was still interesting. Most of the obstacles, etc. were the same (there was even a “boat” at both), but one thing I found interesting in this one was the café at the end. In Vienna, it was just a bar, which we stood at and were served by our guide. Here, there were other people working behind the bar and once we’d purchased our drinks, we went and sat at a table, which meant finding our way over there in the dark and sitting down without spilling anything. We had hoped that with four of us booked on the tour we could go in alone, but alas a group of three had also booked an English tour, so we were seven. Not that that’s a problem, but with fewer people I think there might have been more opportunites to actually use our sticks without banging into someone!

By the time we were finished with Dialogue, we were hungry! We’d spotted a Vapianos near where we parked the car, so we decided to go there. For those who don’t know, Vapianos is a chain of Italian restaurants where the food is prepared fresh. Pasta is made in front of your eyes, while if you order pizza you receive a buzzer that goes off once your meal is ready. I chose a white pizza with courgetteand goat’s cheese, which was very nice. Then it was off to town to show my brother around a bit. We parked near the river, so that was our first stop.

After a looot of walking, we eventually ended up at the Römer (a mediaeval building that’s now City Hall) – probably the most photographed building in Frankfurt! Of course, I took more photos of it (and the square – Römerplatz), despite the fact that I’ve been there before. And why not? It’s the only part of Frankfurt city centre I actually really like 😉 By the way, the balcony on the Römer is usually where the German football team presents tmeselves when they come back from a competition, except this year they didn’t because the decision was made to have the “welcome back world champions!” celebration in Berlin instead. Random fact for you!

With the Römer done and all of us feeling pretty tired of walking (remember, we’d walked all around the musseum, too!) it was time to head back to the car and home. My brother needed to pack and I had work the next day, so we didn’t want to stay out too late!

And that concludes my series of posts about my brother’s visit. Next stop on my travels: Taiwan!

In the continuing absence of properly functioning Internet (Jan has contacted the service provider… so now we wait), here is a post that doesn’t require me to upload any photos…

While checking the TripAdvisor app for things to do in Vienna, we came across something called Dialog im Dunkeln, which sounded really interesting. The various reviews warned us that we would need to sign up, so we headed over there to do so on Monday and were lucky enough to find that some people had cancelled for the following day so there was room for us.

The concept of Dialog im Dunkeln (Dialogue in the Dark) is pretty simple. An underground room (cellar) has been transformed into a landscape with various obstacles that one might find in the world outside… a bridge over a little stream, a narrow gorge, a shop with step leading down to it. The only catch is that the room is kept in complete darkness… and I really mean complete darkness (well, there was one point where you could see light coming through a door frame, but it didn’t help much). Before entering the room, you’re given a white stick (the type for blind people) and shown how to use it, then sent down a corridor with various twists in turns that gradually gets darker and darker. In the room, a guide is waiting for you… somebody who is a) blind and b) familiar with the landscape you’ve been introduced to you. The aim is to navigate the various obstacles in the room as a blind person would. The guide is there to tell you which way to go and, if necessary, physically lead you to the right path. At the end there is a bar, also kept in complete darkness, where you can buy drinks and ask the guide any question you like. And you really can ask anything… personal questions are allowed!

The experience of being in complete darkness is extremely disorienting! Suddenly having to rely on other senses is far from easy, but I actually managed to do surprisingly well in there! The place is set up very well, with an area that feels just like grass (I assume they don’t have real grass in there?), a rocky surface with water running down out for the gorge, a “road” (not a real one obviously, but there are sound effects and you’re supposed to wait for the signal to cross) and even a boat, which moves pretty realistically! This is a really interesting experience and I would highly recommend it if you ever find yourself in Vienna. Tours are available in German or English, so don’t let language put you off!

Alos, I’ve just read that the original Dialog im Dunkeln is in Hamburg, Germany. I’ve no idea whether that one’s any good, but if you’re in the area I’m sure it would be worth a try.