So, I promised you a post about my trip to Schwäbisch Hall, and you would have got it sooner if I hadn’t gone down with the cold from hell and ended up spending most of the weekend in bed (I kind of got up on Sunday… I moved as far as the sofa, where I wrapped myself in a blanket and watched Newcastle play football against Liverpool. We drew. *Sigh*).

Anway… Schwäbisch Hall. It doesn’t quite have the fairytale beauty of Tübingen, but it’s old and has lots of pretty half-timbered houses, which is good enough for me.
We arrived just in time for lunch, which we ate at a little place called Entebäck. If you ever find yourself in Schwäbisch Hall go there! Unfortunately, I didn’t take a photo of the inside, but it’s very quaint (all wooden beams and stuff) and our waiter was so friendly! Whenever the waiter brought a dish out he would introduce it like this: “For you, sir, the fantastic duck Maultaschen soup” (except in German obviously). It was pretty cute 🙂 And look what they did to my after dinner coffee: 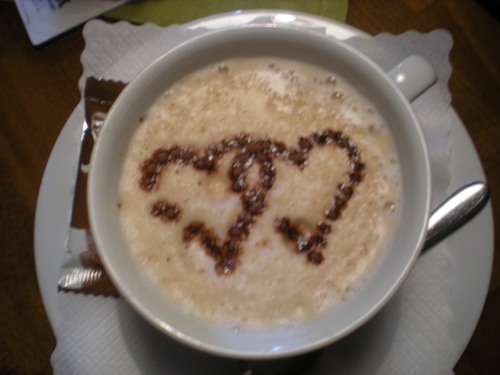 Well, it made me smile anyway 🙂 Add to that the fact that the food was, in fact, delicious and you’re on to a winner! Entebäck definitely gets my recommendation. Also, the people on the table next to us had a million special wishes (one of them seemed to be on a very restricted diet), all of which were complied with without complaint, which doesn’t always happen (as I know from experience after many meals out with a family friend who has coeliac’s disease, i.e. can’t eat gluten. You’d be amazed how many restauarants have trouble with the question “what do you thicken your sauces with?”).

After lunch we headed to Marktplatz, which was just around the corner, and went into the church there, St. Michael’s. Here’s the outside of it:

And opposite it the Rathaus (Town Hall) – slightly nicer than Karlsruhe’s effort! (One day I’ll post a photo for you and you’ll see what I mean. Or you can Google it. I’m sure there are images somewhere on the web). 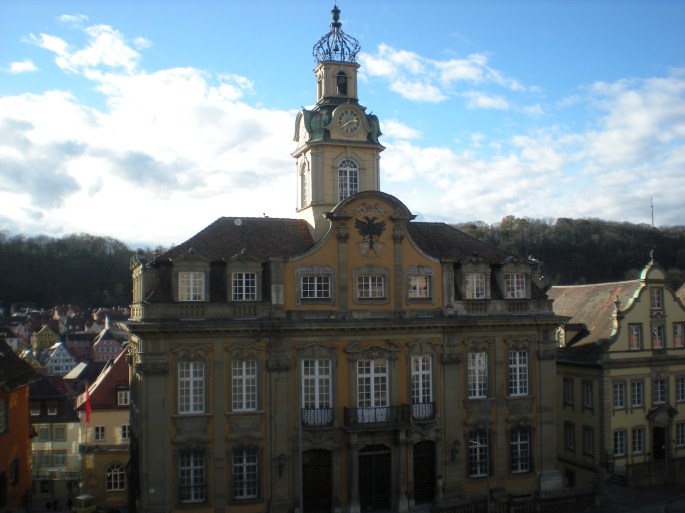 The river that runs through Schwäbisch Hall is called the Kocher. I love that the town is built up around the river – Karlsruhe is technically in the Rhine valley but the River Rhine is nowhere near the town centre. I miss living near water!

We were lucky with the weather for most of the day (just look at the blue sky behind the Rathaus1), but by 6:30 p.m. it had started to rain quite heavily. Since it was also dark by that time and my throat was already beginning to hurt (the start of the evil cold from hell!), we decided to head for home. And that was Schwäbisch Hall, number seven on my list of 30 towns to visit before 30… I wonder where my travels will take me next?

Update from August 2014: I’ve added this post to the Travel edition of the Expat Bloggers Bloghop over at Young Germany, check out the other entries here.