No, you won’t see any teddy bears… not in these particular woods anyway! Last year, at around this time, we wanted to do something on a sunny day that just happened to also be a public holiday in both Germany and Switzerland. I had read about a fairytale sculpture trail in some nearby woods, so we hopped on a tram to Reinach and went exploring.

The sculpture path originally opened in 2005 with 12 sculptures. More were added in 2008, 2009 and 2011, for a total of 46 fairytale characters by 22 artists today. Obviously the later ones are in better condition than the earlier ones. Some of the sculptures represent specific fairytales that I recognised, some are Swiss tales that I didn’t know and others seem to just be general fairytale themes, for example a palace or witch that didn’t seem to be from any particular story.

The palace above is actually a marble run, which is pretty cool. We found a marble on the floor and managed to give it a go. Then, later on the trail, we found this: 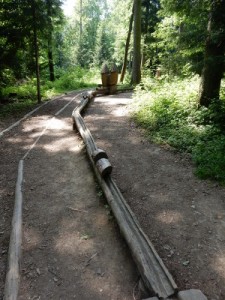 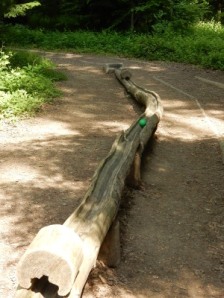 We spent quite a while playing with it because… well, you just would, wouldn’t you? So fun!

Poor Puss in Boots appeared to have fallen victim to a madman with an axe, and Pinnochio had lost his famous nose completely. Does that mean he had been telling too many truths? Telling tales unnecessarily, perhaps?

We found Red Riding Hood, hiding from a rather young looking wolf. 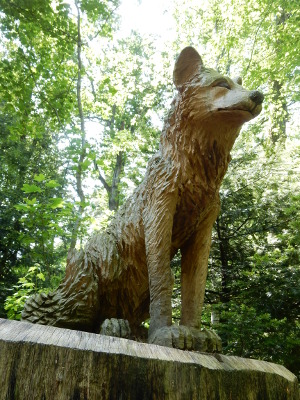 I immediately recognised the following sculpture as a mirror and assumed it was SNow White, but its sign informed me it’s actually Momo’s mirror. Momo is a fantasy novel by Michael Ende, which I started reading ages ago and never finished so I’m not sure where the mirror comes in!

Of course, no fairytale trail would be complete without an actual fairy! 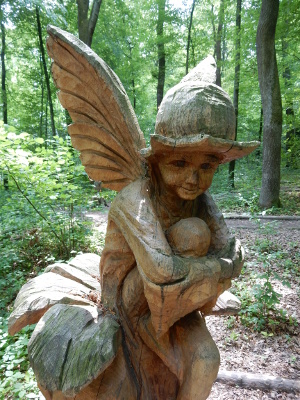 We didn’t bring any food with us, but there is a picnic area in the woods including a place where you can “grill” over an open fire. The sculpture trail is only in a small part of the woods, and there is also a nature trail throughout the whole thing – the signs are only in German but I’m sure you can still have a nice walk. The photos I’ve shown here are, obviously, just a few of the sculptures. There are plenty more to discover. I can recommend this to anyone visiting Basel who has children or – like me – just loves fairytales!

To get to the sculpture trail, take tram number 11 from Basel to the stop called “Reinach Süd”. The start of the trail is a short walk – about 10-15 minutes. Follow signs for “Schulhaus Fiechten”.