My first trip to Amnéville Zoo was in May 2011 (you can read about that here) and I’ve been meaning to go again ever since… four hours just wasn’t long enough to take it all in! So we decided to take the opportunity that the four-day Easter weekend provided and go there again, this time for an entire day. We had also wanted to take our frind, K, along with us knowing she would love the falconry display as much as I did, so having checked that she had time, the date was set. With a two-and-a-half hour drive to get there, we needed to be on the road early, but the day was well worth the 6:30 a.m. wake up call (and the 32 euro entrance fee)! Apart from the falconry show, there weren’t any specific exhibitions we wanted to see, so we chose to just wander and see which animals we came across. Here are some photos from the morning and early afternoon, which included the petting zoo and reptiles, among other things. How adorable is the baby orangutan? 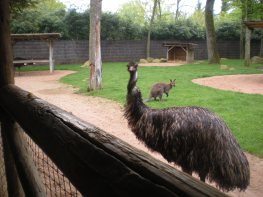 Mini pigs… look how tiny the piglets are! 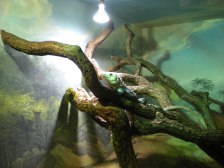 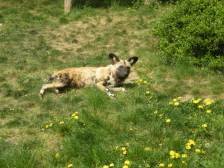 Once again, the falconry display alone would have been worth the drive. I’m not sure what the angel of death/birdman/giant crow thing was supposed to represent (that part didn’t happen last time and the talking was all in French!), but the actual birds were impressive. I don’t need to understand the explanations to appreciate a good flying display!

Birdman… angel of death… what even are you?

Kneel before me, mortals…

Birds of prey done, it was time for gorillas, various cat-shaped animals, red pandas (there’s were bigger than the ones in Karlsruhe) an ice cream stop and finally the African plain, home of elephants and zebras and white rhinos (most of which I have no pictures of because my camera battery died…). 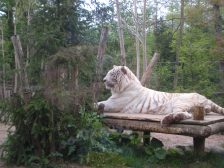 Once we’d seen everything, we stopped at a Buffalo Grill on the other side of the carpark for dinner. I had a country burger, which was basically a cheese burger with giant round hash browns instead of a bread bun – delicious! I would have taken a photo, but I was too busy demolishing it! The blue cheese dip was also incredibly tasty. Then we piled back into the car for the drive home, a good time having been had by all.

I am counting Amnéville Zoo as my April 2014 trip for the Take 12 Trips challenge. For more trips, follow the #take12trips hashtag on Twitter

On Saturday we went to France to go to the zoo. That isn’t quite as insane as it sounds. It was only a 2 and a half hour drive (we live really close to the French border) and the zoo is pretty amazing.

They have anteaters! Which is one of the reasons we decided to go in the first place.

Funny looking things, aren’t they? Unfortunately, by the time we got round to them it was nearly closing time and the animals had already been taken inside, so I couldn’t get a good picture. Stupid reflections on the glass.

I could have stayed and watched them all day! When they’re that little you can certainly tell that this is where dogs come from. One of them had even found a fir cone and was playing with it like a ball. So cute!

There was also a mediaeval falconry display, involving horses and lots of birds! All the talking was in French (which I don’t understand) but that didn’t matter. I don’t need to speak French to be fascinated by birds of prey! Unfortunately, my favourite bird (the Peregrine Falcon) was not involved in the display, but we did get to see one in its cage later. Here it is.

And here are some of the birds that were involved in the display.

I wonder what they were plotting, sitting there all in  row?

The zoo also had bats (no picture of them – too dark!), orangutans, red pandas (cuuute!), a skunk and even some rhinoceroses – or should that be rhinoceri? In just four hours we didn’t even have a chance to see everything! Next time we’ll have to leave earlier and spend the whole day there. So, if you ever find yourself in Lorraine, make sure you go to the zoo in Amnéville – it’s well worth it! If you get in touch with me before you go I might even join you there!