Day 1 of my brother’s visit was spent in Karlsruhe, eating crepes and having a wander around. He had been before (about seven years ago!) so it was interesting to see what he remembered. Of course, some of the things he might have found familiar are now no longer visible due to ongoing construction for the tram tunnel!

After checking the weather for various places, we decided to make our first trip of the week Strasbourg simply because it wasn’t supposed to rain there! Strasbourg is about an hour’s drive from Karlsruhe (or between 45 minutes and 1.5 hours by train, depending on whether you take the express of regional transport). I didn’t actually take as many photos in Strasbourg as I normally would on day trips because I’ve been several times before (there’s only so many times you can photograph the same building!), but here are a few: 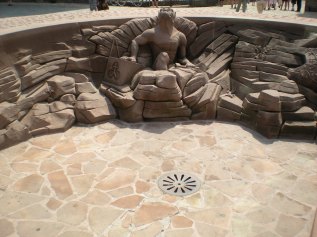 Cool sculpture outside the cathedral 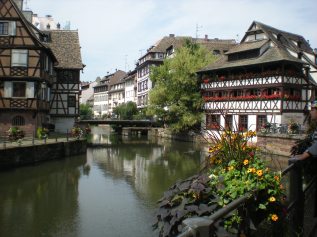 The building on the right is probably the most photographed in the Petit-France area!

After walking around for a while and taking in the “main” sights (cathedral, canal), we decided to stop for lunch in the Petite-France area. It’s pretty touristy down there, but whatever. We were tourists, right? 😉 I decided to go traditionally Alsatian and have Tarte flambée (actually not 100% traditional, because while I did go with the baon and onion topping, I chose one that also included cheese… because cheese! No further explanation necessary).

Once we’d eaten, I wandered down the water’s edge and attempted to take a photo of a mother duck and her ducklings. I swear I’ve seen ducklings in Strasbourg every single time I’ve visited! No matter what the time of year, there are ducklings! (The one exception is the time I went for the Christmas market, but we were nowhere near the water then.) 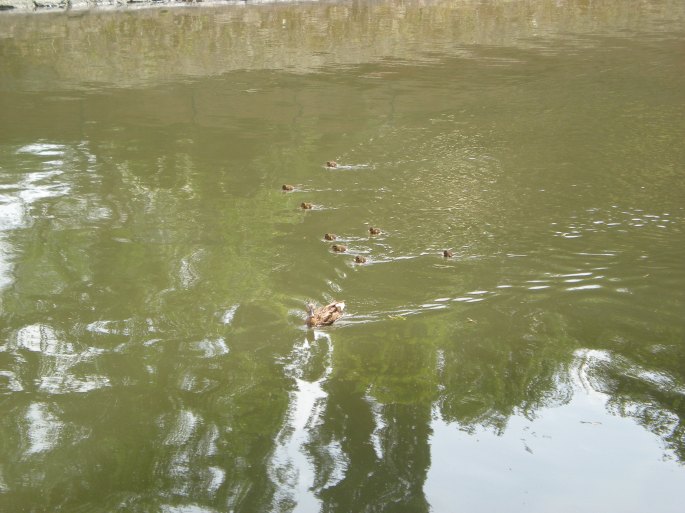 From Petite-France, we wandered down to the Barrage Vauban… the Vauban weir. Inside the weir there are sculptures and, when we were there, also an exhibition showing the various suburbs of Strasbourg as they used to be and as they are now they’ve been incorporated into Strasbourg (most were originally little villages). Vauban, who built the wier, was actually a military engineer and built numerous fortifications, all in a very specific style. On top of the weir, there is a panoramic terrace with a lovely view of the various bridges.

After walking around for a little longer, we decided to head back to the car. Instead of heading straight home, we used the sat nav to look for places of interest in the general vicinity and came up with La Petite Pierre, where there was supposedly a castle. It meant a bit of a detour, but still wasn’t too far from home, so we added it as an intermediate destination. Also, Jan told me the name of the village means “little rock”, which amused me because that means anyone whose name is Pierre is actually named rock! (Yes, the mame Peter actually means stone or rock as well, but that’s not the same as having the actual name Rock). By the time we arrived, the evening sky was the perfect colour for taking photos! Here’s the castle and the little church beside it:

In the grounds of the castle there was the following sculpture, carved entirely from a single tree branch. I thought it was cool! 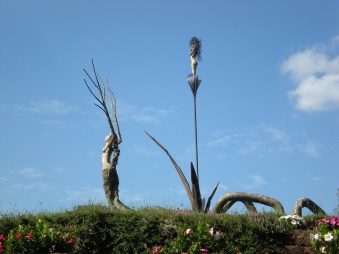 There was some kind of exhibition in the castle, but none of us was really interested in seeing it, so instead we wandered over to a little garden/picnic area opposite. There, we found large stone coats of arms from the neighbouring villages. I’m pretty sure the hat on the first one once belonged to the Sorceror’s Apprentice 😉 Sorry, but I don’t actually remember which villages/regions the coats of arms were for. Any French people out there want to help?

On the way in to La Petite Pierre we had driven past a tearoom, so we decided to have a walk back down the hill and head there for a drink. On the way back through the village, I couldn’t resist taking a photo of a tiny door with carvings of girls carrying pretzels on it. It looked to me like it should be in a fairytale! 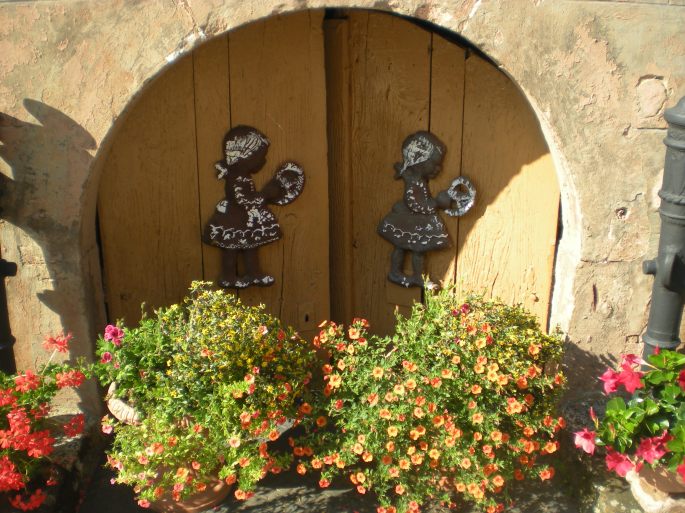 The tearoom turned out to be fascinating… crammed full of all sorts of odds and ends, from various different teapots (okay, not that bizarre) to shoes randomly hanging on the wall. Sorry my second photo is a bit blurry, but I’m sure you get the idea! 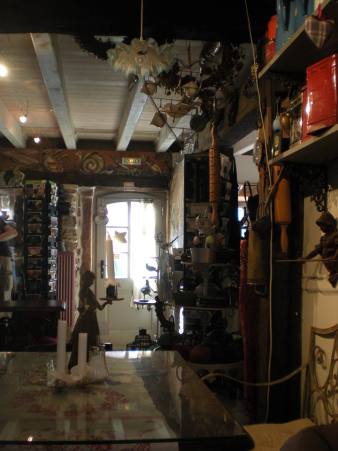 After a quick look at the menu, I decided a hot chocolate with cream was the way forward.. and once it arrived the cup and saucer just begged for me to take a photo! We also all decided to have a piece of cake – lemon meringue pie for my brother and I and something with bergamot for Jan (I tried his – the bergamot doesn’t taste quite as perfumy in cake as in Earl Grey tea but it’s still not my favourite thing in the world!). My meringue was slightly chewy, but not too bad.

Once we’d finished eating and drinking, it was time to return to the car for the drive back to Karlsruhe. Day trip one done! next up is Basel, which I’m counting as my July trip for the Take 12 Trips challenge. Stay tuned!

It’s been a very long weekend. Jan’s parents were here because on Friday he had his kind of graduation… not a graduation in the sense that we know it from England but there was a small ceremony with speeches followed by food, free beer and live music. The speech part was pretty boring but the rest was fun.

Yesterday we went to Strasbourg where we had a boat trip on the river, then today we went to the DDR museum in Pforzheim before Jan’s parents left to drive back home. Tonight I’ve been out for a meal with my colleagues. We went to Stövchen, a very student friendly restaurant/pub in Karlsruhe. I had Flammkuchen, or “tarte flambe” as they call it in Alsace, where it comes from. Very busy weekend with lots of early starts and long days. I’m now exhausted, which is why I’m keeping this blog short. It’s definitely past Bev’s bedtime…