Happy July friends! We’ve actually made it through half of this messed up, unpredictable year. As always on the first Thursday of the month, I’m linking up with Kristen for What’s New With You.

Honestly, June wasn’t the best for me for reasons that I will not go into now. Maybe one day. Also, my mum was supposed to visit but obviously couldn’t so I have no idea when I will see her (or any of my family) again.

But anyway, what did I actually do in June?

I made cards for two friends who had babies 15 days apart. One boy, one girl. The second child for each of them.

I’ve blurred out the name on the second card. Even if none of you know who my friend is, there’s no need for her daughter’s name to appear on my blog. (If you can actually manage to read it despite the blurring, please keep it to yourself.)

Switzerland relaxed the rules a lot more. Basically everything is open now. The border with Germany opened again on the 15th, but I haven’t actually been into the office yet. Jan went into his office once because he had to pick something up, then he went for lunch with some colleagues (keeping the appropriate distance apart) including someone who is relatively new, as in started working there during lockdown, so he thought it would be nice for her to actually meet some people in person. I haven’t actually been to any shops yet (other than supermarkets/pharmacies) but we did pick up take away sushi from a local place that doesn’t do delivery. Theoretically, events with up to 1,000 participants are allowed now, but I don’t expect there to actually be any since as far as I know everything that was originally going to be in July or August has already been pushed back to the autumn or next year.

We walked into town a couple of times, avoiding people as best as possible. On one of those walks, we had a drink by the river – staying on “our” side because the other side was packed! Some people seem to think this whole thing is over – and yes, Switzerland is doing pretty well, but at the end of last week there were 69 daily cases compared to just 18 at the beginning of the week, so even here where numbers are low we’re far from out of the woods!

Jan went to his first choir practice since the beginning of March! He says they put the chairs an appropriate distance apart and not many people were actually there anyway. Their next practice will be in August, provided Switzerland doesn’t end up having to restrict things again by then…

I finished 17 books. You will find out what they were on on Show Us Your Books day. There were a few I really enjoyed but only one I gave five stars, which happened to be the very last one I read in June: With the Fire on High.

That’s it I think. I don’t have anything else to tell you. I hope everyone is staying safe and healthy.

Don’t forget to check out the link up. And tell me what’s new with you.

I find it incredibly difficult to stitch for the little boys in my life, mostly because my stitching magazines tend to feature cute, anthropomorphic animals, flowers and things that are generally more often associated with girls. (Yes, I am aware that boys can like cute things and flowers just as girls can be into superheroes, cars and dinosaurs, but quite frankly most of my friends’ children are boys and they are into stereotypically boyish things, while the one little girl I stitch for is perfectly happy with fairies and cute critters. I’m not about to make something up just to prove how open-minded I am am!).

Occasionally, a cross stitch magazine does include a “stitching for boys theme”, but they’re few and far between. So when I ordered a cross stitch book entitled “Babies & Children” I was over the moon to discover it contained entire pages of dinosaurs, rockets and planes. Between that and my magazines, I was able to stitch up quite the collection for all the boys’ birthdays I needed to cater for within a 27 day period in August and September! (All my friends’ little boys seem to have their birthdays close together as well…). Here are some of the boyish birthday cards I stitched up this year. 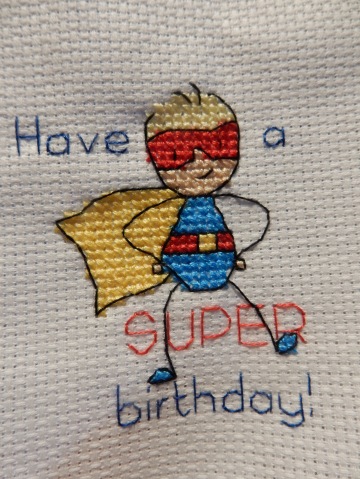 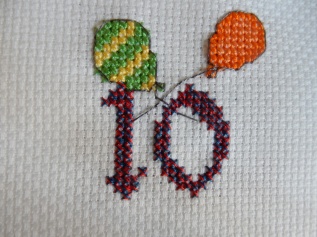 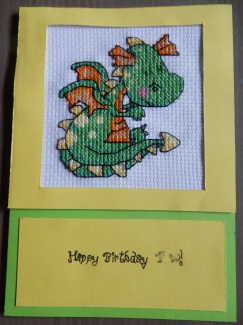 If you took part in this year’s guess the cross stitch game, you should recognise the dragon.

Which of these is your favourite? What would you stitch for a little boy? Give me some new ideas for the next set of birthdays!

Quite a few children in my life have had birthdays recently – including my godson and my brother – so I decided to make use of some of the various alphabets that have featured in my magazines and make them all cards with their first initial on them. Here’s a small gallery of what I made (click the pictures to see bigger versions). For most of them, I took a close up photo of the stitched image and one of the full card… except the last one where I for some reason only took one of the finished article?!

Apologies for any blurriness – apparently I still don’t know how to use my camera. 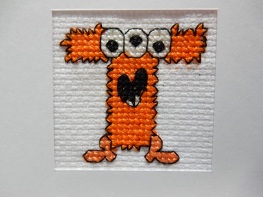 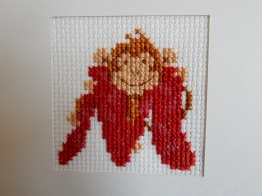 You may have noticed that there are two Ts. Just to make things extra confusing they both have the same name! And their birthdays are just 17 days apart. They were born in different years though – one was 2 at the end of August and the second, my gorgeous godson, turned 3 on 13th September.

My favourite is the T monster, but the cheeky monkeys are pretty cool too 🙂

Another Friday (hurrah!)… another round of letters from me to the world.

Dear snow. You looked very pretty this morning and I wanted to take photos, but I was already running late to catch my train. Please stick around til I can get out there with my camera.

Dear new boots. You are beautiful and I can’t wait to show you off! (Post with pictures to follow soon).

Dear unread books. I see you eyeing me up from the bookcase every time I walk passed. Please be patient – I promise to get round to you soon. (Pride and Prejudice, you’re next. You can stop glowering at me now ;-))

Dear self. STOP SPENDING MONEY! And yes, that did need to be in caps!

Dear readers. Thank you for sticking around despite all the “I’m going to be 30 soon” and “All my friends are having babies” induced whining I’ve been doing lately. You are all amazing.

Dear TV. We are hopefully coming to get you this weekend. I can’t wait to be able to watch DVDs on a proper screen!

I hope you all have a great weekend, however you’re planning to spend it. I’m at a party tonight and hoping to spend the remainder of the weekend getting a lot further with my current cross stitch picture!