Last week, Jan told me I should pick somewhere for us to go this weekend, so I looked around at places that are near here and chose Schwetzingen. The reason? They currently have an exhibition on The Magical World of “Figurentheater” (the only translation I can find for Figurentheater is “puppet theatre”, but they had examples of paper and shadow theatre as well so I’m not sure what to call it). The exhibition is on until 27 January 2013 but this Saturday only they had someone coming in to do a talk on the making of a marionette, from the idea to the acting of the story. Naturally I wanted to go (yes, mentally I’m probably about 5!). 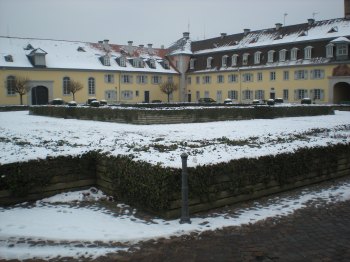 It wasn’t snowing when we arrived in Schwetzingen, but as you can see from the above photo, there was still some white stuff lying from previous days.
The marionette talk didn’t start until 2pm, so our first stop was the castle, which is included in our Museum cards (which I got for my birthday last year). You could only go inside the actual castle as part of a tour, and the next one was at 1:30 pm (which would have prevented us from going to see the puppets), so we just went into the gardens instead.

I’ve heard they’re supposed to be beautiful, but right now they’re mostly just white. And all the plants are dead. There was an exhibition in one of the wings of the castle though, so we went to have a look at it. Art work by Miro. Can’t say I was particularly impressed.

On the square outside the castle there’s a sculpture called “Die Spargelfrau” (The Asparagus Lady). Apparantly Schwetzingen is on the German asparagus route… Germans are weird 😉

I liked the little dog best. His collar says his name is Nico.

It was 12:30 by this time, so we decided to grab some lunch. There was a brewpub right on the castle square – Brauhaus zum Ritter – so we went there. A Ritter is a knight, by the way. We chose a table with a view of the castle and ate some lovely German food. And, of course, drank some of the beer.

Once we’d finished lunch, it was time to head down to the Stadtmuseum (town museum) to see what we’d actually come for. The talk was really interesting and afterwards we were allowed to play with the puppets. Most of the audience were adults (only 3 kids were there!), so I’m obviously not the only childish one 😉

Then we went to have a look at the rest of the exhibition. We had a go at the shadow theatre. Here’s my attempt to do the alligator:

Jan tried his hand at the elephant, but to me it looked more like a bird. What do you think?

Making shadow creatures is more difficult than it looks!
I would have liked to play for longer, but the kids wanted a go so we moved on to the other exhibits.

Naturally I had to take a photo of this owl puppet!

Back in the town centre, we found the Evangelical church.

Close to the church, there was this stone sculpture that Jan thought was cool. There was no plaque or anything to tell us what it was supposed to represent though.

A little further on, we came across the Catholic church. If there’s one thing all German towns seem to be full of, it’s churches! I can think of six in Karlsruhe off the top my my head, and I bet there are more.

The sun had come out by this point, so I actually managed a photo with some blue sky on it 😀
Moving on, we spotted this peacock lying outside one of the town council’s buildings. I wonder where he belonged?

Schwetzingen is not the prettiest of towns, although it does have a few nice buildings. There’s also not a huge amount to do. If you’re going to visit, I’d recommend doing so in summer when you can take a proper long walk through the castle gardens. There seems to be a lot to look at there, but a lot was closed or inaccessible in the snow. Maybe you could even take a picnic. We certainly intend to go and look at those gardens when the weather’s more suitable for walking around!

We haven’t been to any German towns this year yet, but if I’m going to complete my 30 German Towns Before 30 challenge I need to get on with it, so today I shall go back in time…

Jan and I visited Weil der Stadt on 22 November 2011 – never the best time to visit a new place (cold and grey springs to mind!) but the ideal conditions for day trips only exist for about 4 months of the year so occasionally you just have to bite the bullet* and go anyway.

The town is called Weil der Stadt to distinguish it from other Weils (such as Weil am Rhein). The word “weil” is actually German for “because”, but the town name has nothing to do with that (it was originally spelled “Wile”, as we discovered in the town museum). Shame 😉

Weil der Stadt is mostly famous for being the birth place of the astronomer Joannes Kepler, or at least it is to those who have ever heard of Kepler, which I hadn’t. (Jan had but didn’t know where he was born).
Here he is:

Kepler’s birth place is now a museum, and because Jan is interested in all things sciencey we went in. I seem to remember finding it interesting at the time, although I now no longer remember anything I read there. In this photo, the Kepler birth house is the white building on the corner:

After checking out the museum, we went for a walk around town. Our route first took us down the street next to the museum in the direction of the Church of St. Peter and St. Paul.

Later, we discovered a Narrenbrunnen (Fool’s Fountain). Unlike Karlsruhe, Weil der Stadt actually does carnival (known as Fastnacht in that area of Germany, or Fasnet in the local dialect).

There are several towers dotted around the town, along the old town wall. Here is one of them.

It was once a prison. These days, you can get married in there if you wish!

Weil der Stadt doesn’t have quite the fairytale prettiness of places like Tübingen or Calw, but it is pretty enough in its own way. If you like taking photos of old buildings, towers and the remains of town walls then there’s plenty to see. The Kepler museum is interesting and worth a visit if you’re into astronomy or learning about famous scientist’s lives. There is also a town museum (I think everything was German only though) and, now, a doll’s museum! I don’t think that last one existed when we were there (I would surely have tracked it down if it did!).

* The German for this is “In den saueren Apfel beißen” – “to bite into the sour apple”. I prefer this to the English phrase!

So, in my last post I mentioned that I recently reached the grand old age of 29 (on 13 August in case you’re interested). This means I will be 30 next year… something that I find I am not dreading quite as much as 29. After all, I have a whole year until then. 365 days to come to terms with the fact that I will no longer be a 20-something. Reaching 29, on the other hand, made me realise that the chances of me achieving many of the things I wanted to before I turned 30 have now been reduced to almost zero. But so that I won’t have too many regrets once I do reach the big 3-0, I decided I need to achieve something in the next year. And so I hit upon the idea of visiting 30 German towns before turning 30. Obviously including the ones I’ve already been to – I don’t get that much time off you know! But to make things slightly more difficult, I’m only going to include places that I have actual photographic evidence of and can remember enough about to write a blog post on them. This is mostly because I took a European trip with my grandparents when I was 17, and while it did involve a few days in Germany, I can’t even remember the names of most of the places we visited never mind what there was to see there! This means that so far I’m up to 5 places – that being the number of German towns that have already been included in my blog. (Click on the name of the town below to read my post on it).

More shall be added as a dig out photos from my various trips around Germany and get round to blogging about them and, of course, visit more places. For now though, I need to do some work (overtime… yay) and then start cooking. Ciao for now!