Can you believe January’s more than half over already? Unbelievable! We’re 17 whole days into the new year already and I’ve done exactly… nothing. Hmm. What is it with time going by so fast lately anyway? I’m sure the years were much longer when I was little.

So, it was my dad’s birthday yesterday. He’s the third member of my family to have a birthday this month, and it’s my Grandma’s on the 27th. What is it with members of my family all being born in the same month? Actually, that’s not strictly true, there are more then 4 people in my family. But January is definitely the most crowded (and thus must expensive) month. Plus it comes straight after Christmas when I’ve already spent all my money buying gifts for half the world. Aaah.

Now, could somebody please explain to me what it is with Gordon Ramsey and the Secret Garden? I wrote a post a while ago wondering why Amazon recommended me a Gordon Ramsey cookbook based on the fact that I rated the Secret Garden. (I’m still not getting the whole rating a kid’s book means you must want a recipe book thing, but never mind). Since then I’ve had a few people land on my blog through a Gordon Ramsey/Secret Garden related post, but lately it’s gone mad. Just take a look at this screenshot (hopefully you can read it): 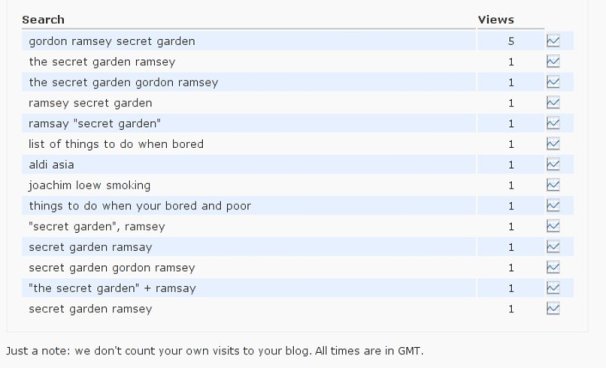 For those who are unfamiliar with wordpress, that’s part of the stats page for my blog, specifically the part that tells me what search engine terms have led people to me (it’s also where I find the questions for Question Time). The above list is all from the same day. That’s 14 queries about Gordon Ramsey and the Secret Garden in a mere 24 hours. What is going on?? If anyone has any information please leave a comment. (Yes, I know I could just Google it myself, but quite frankly I can’t be bothered, so just indulge my laziness would ya).
Right, I’m off to make a cuppa. I got a box of Chai tea yesterday that sounds lovely and I haven’t tried it yet. (In case anyone’s interested it’s black tea with what’s described as “Indian spices” – ginger, liquorice, cinnamon, pepper, sweet blackberry leaves, pimento, cardamom and cloves – sounds yummy, no?)

1. Not being able to sleep. The most annoying thing is that I’m actually really tired – too tired even to read, but as soon as I switch out the light every trace of sleepiness goes away and I’m left lying there, tired but wide awake. Grrr. The boyfriend is coming over tonight though, perhaps that will make things better.

3. Shop assistants. Why is it that they only ever offer assistance when you’re perfectly fine on your own. No, I do not help to walk the six steps to the other side of the shop and pick up a roll of sellotape thank you very much. But when you do need help they all seem to magically become incredible busy or get kidnapped by aliens.

4. Finally finding the perfect present for one of my relatives only to discover that none of the shops in Karlsruhe has it. Not one! It has now been ordered from Amazon, meaning I have to pay extra because of postage. Again, grrr.

5. The fact that I forgot to put a book in my bag yesterday and had nothing to read all the way to work. And all the way back. That’s an hour’s worth of tram journey with no reading material. Dooom!

6. The presenter on the radio station we listen to during our lunch break at work. She’s just so goddamn cheerful!
And just to balance things out a bit, here are some things that have amused me today:

– When you type in “subject to German law” on Google UK, the second link to come up is about strip searching. (In case you’re wondering why I typed that into Google it was to do with a translation I was proofreading.)

– They played Teenage Dirtbag by Wheetus on the radio today. The word gun was blocked out but they left dick and ass in. That’s Germans for ya – bad language is fine but please don’t sing about weapons! I know, not that funny but it amused me. Simple minds and all that…

I decided not to do question time last week since it had been such a slow week on the search engine terms front and there were only about three questions that were worth answering. The seven days since then haven’t been much better, but I don’t have anything else to write about and with the pickings from two weeks I should just about be able to scrape together enough questions for a whole blog post. Plus it might take my mind off the mosquito bite on my ankle (it’s itchy! Aargghhh! Make it stooop!).
Sooo, here goes. Time to answer the latest questions that have led Google readers to Confuzzledom…

1. Did you know the world is going to end?
Oh my gosh, is it really? And there was me thinking it was going to go on forever and ever. Thanks sooo much for spoiling my illusion. Next you’ll be telling me Father Christmas doesn’t exist…

3. Joachim Loew pronounce
So I’m guessing what you actually mean here is “How do you pronounce Joachim Loew”, although if you can’t even get the question right I don’t see why anyone should answer you. Hmph. But since I’m kind…
I wouldn’t even bother with the Joachim part if I were you. Just call him Jogi, all the Germans do. That’s pronounced Yogi by the way. As in the bear. And Loew is pronounced a bit like Lurrrv. Yogi Lurrrv. I bet you’ll never forget that again.

4. 24, what year was I born?
Okay Mr (or Ms.) anonymous googly person. I really don’t believe you’re actually 24. Surely if you were you’d have amanged to figure out what year you were bron by now. This is definitely someone trying to find out which year to out on their fake ID.
But just in case you really are 24 and for some unknown reason have managed to forget your year of birth here’s a tip for you. If you’re going to be 25 before December 31st you were born the same year the Red Hot Chilli Peppers formed. Now go ask Google for the answer to that riddle…

5. Ways to say summer is over.
Sorry, can’t help you there mate. I only know one way to say it and it’s right there in the question. Or do you think just saying “summer is over” is too direct? You could try saying “autum is here” I suppose. I mean, it does kind of imply summer is over. It can’t really be both at the same time…

6. I’ve got a headache could I have drunk
Drunk what? Don’t stop there, I was just starting to get intrigued! Do you think it might have been weedkiller? I don’t – I suspect that might give you a bit more than just a headache. Maybe it was the opposite of a pain killer… like a pain causer. Yeah, I bet that was it. Sshh, don’t tell anyone how you made it though, or we’ll all be wanting some for the days that we don’t feel like going to work…

OK, that’s it. Six measly little questions in two whole weeks. Do you think it’s cos all the kids have gone back to school?

Well not you personally. The general public type of you. Or more specifically that part of the general public that types questions into Google and ends up at my blog.
I actually kind of stole this idea from Katyboo, but I’m pretty sure she’s not the only blogger that’s ever done this so she won’t mind me stealing it… will you Katy?

So for those who don’t know the concept, I shall explain.
Basically wordpress has a statistics page where it tells me, among other things, how many people have looked at my blog and what link they clicked on to get here. It also tells me what people typed into search engines that led them to me. This blog will be a sort of question and answers session, where I take some of the search terms and answer/comment on them.

And now, without further ado, it’s time for me to answer the world’s questions…

1. What to do when bored at midnight?
You could try to going to bed. That’s traditionally where people are at midnight. Unless they have something better to do, which you clearly don’t otherwise you wouldn’t be bored.
Wow, that was easy. Next question please…

2. How to make my crap smell worse.
Why? Why would you want to do that? Personally I think crap already smells bad enough, even the less smelly varieties. It’s a waste product for goodness sake! If you really, really want to go through with it try eating lots of Mexican food. All those spices have to have some effect, right?

3. Why don’t babies blink often?
Don’t they? I haven’t been around enough baby babies to notice. My guess would be becasue they have smaller eyes.

4. How do the Brits cook their tea?
Do you mean tea as in cups of tea? Cause in that case we don’t. Why would you want to cook tea? You just put it in a cup or tea pot (in one of those strainer things if it’s loose) and add boiling water. Then you leave it to stew for a while. No cooking involved.
If by tea you mean the evening meal – which I doubt because only people from Northern England call it that and they wouldn’t need to ask – we probably cook it the same way you do, in an oven or on a stove. Unless you’re a caveman, in which case you cook your meals slightly differently…

5. What is the German law on naming babies?
I’ve done a post on this before, so this time I shall be brief.
Basically it says the name is not allowed to harm the child in any way, so no calling your kids Talula Does the Hula from Hawaii (this really happened, by the way…). Oh, and it has to clearly state the gender of the child, so names that can be used for either sex either have to combined with a middle name that’s one or the other or made into double (hyphenated) names. If the officials don’t believe your choice of name is actually a name you have to prove it. And no, saying “but Frank Zappa named his daughter Moon Unit” does not count as proof.

6. What can you do when you turn 25 years old?
– Panic
– Get incredibly drunk and go around telling people that you’re actually not 25, not at all, it’s just a vicious rumour.
– Stay in bed all day and pretend it isn’t happening
– Or you can choose to embrace it. After all, being only 5 years away from 30 isn’t that bad… right?

7. What to do if you drank too much water?
Stay near a toilet would be my advice. You’re going to be needing it. You could also try eating some mashed potatoes or something – that might soak up the excess.