Somebody found my blog the other day by googling “Housework fairy Stella”. Who knew she had a name? Or maybe it isn’t a name… perhaps there’s some connection to the beverage producer. Lager, Cidre (it’s NOT cider… apparantly) and housework fairies. The possibilities are endless! But anyway… now to return to today’s scheduled programming…

So, let us go back in time to the weekend of 20-22 July 2012. We had tickets for the Formula 1 weekend at the Hockenheim Ring. Not because I’m a particular fan of fast cars driving around in circles (ok, funny shaped circles then), but because it turne out to be a good way to get my sister to actually visit me! We decided not to go on the Friday – even Ms. hardcore Formula 1 fan herself (the sister) didn’t think there was a huge amount of point in watching the practice – but we decided to go along on the Saturday, watch the qualifying, check out our seats and find out what (if anything) you were allowed to take in with you. We took a bottle of water and made sandwiches and it was no problem whatsoever. Suck on THAT football stadiums who refust to let me bring in my bottle of tap water, but also refuse to sell me any that isn’t carbonated. Yuk!

First impression of Formula 1: It is LOUD!! If you ever find yourself attending a race, take their warnings about ear protection seriously! We were very glad of ours. There was actually a running commentary being played via the loudspekaers the entire time we were at the qualiying, but we didn’t figure that out until the break between rounds one and two. All you can hear is Vrrrroooooooom, Vrrooooooooom, Vvvrrrrrrroomm… and that’s with earplugs in! It was also incredibly difficult to follow what was actually going on. Well, for Jan and I especially seeing as we didn’t even know who was who. Although I was aware that Sebastian Vettel was driving one of the cars with a Red Bullo logo on the side… because you can’t live in Germany and not know that Vettel drives for Red Bull!! I have to admit though, I had no idea who Schumacher was driving for… luckily my sister’s official programme was able to help with that. The atmospher was great though, and a good time was had by all (despite a good soaking about halfway through!).

The next day we went back again… much earlier this time! For the qualifying we had left the house at about 10:30 a.m. For the actual race we were out of here by 9! And before that there were four people to get breakfasted and showered. It was an early start! This time we took some cans of beer with us – there were signs all over saying no glass bottles, and although nobody was actually checking we decided not to take advantage of their leniency (I just had to look up the spelling of that and it still seems weird to me!). Let me tell you, finding cans of beer in Germany is not that easy! REAL had a choice of about 5 different types! This time we knew exactly where to go for our seats and were settled fairly quickly. Oh, and one interesting thing: this is the only event I’ve ever been to where there was a queue for the men’s toilets! Us girlies were able to walk straight in. It shouldn’t be surprising really considering what sport we were there to watch, but somehow it still was. I was able to follow things a little better than the day before (would still have been completely lost without the screens though.. and even my sister got confused at one point!) and knowing which cars to look out for meant I was able to at least try to get photos of specific drivers. I was aiming for at least one each of Sebastian Vettel and Michael Schuhmacher, maybe one of of Nico Rosberg (since he’s German too and unfortunately overlooked due to being on a team with the way more famous Schumi) and also a couple of the Vodafone McClaren Mercedes drivers for my sister, who loves Hamiltobn for his driving skills but wants to marry Button – apparantly. All in all it was quite an interesting experience, although not one I necessarily need to repeat (especially not at that price!!).

Here are a few of the photos I managed to get.

My guests left this morning (I escorted them to Mannheim where they had to change onto a second train) and have now arrived back in England. Meanwhile, I’ve been attempting to get the flat back into shape ready for Jan’s choir to come round on Thursday – the boy himself currently being in Bonn at a conference. He even rearranged his holiday for it, which slightly annoyed me. After 5 days of visitors I was hoping we could have this afternoon just for the two of us – now I’ll have to wait til Saturday for that, provided he has time then! Work takes priority though I suppose, and the weekend will come as it always does.

I’m way too tired to write a proper blog post about all our adventures today, and I’m not sure whether I’ll get round to it tomorrow, but I thought I would at least post one photo of the Hockenheimring for you. This one’s for any Jenson Button fans who happen to be reading my blog… 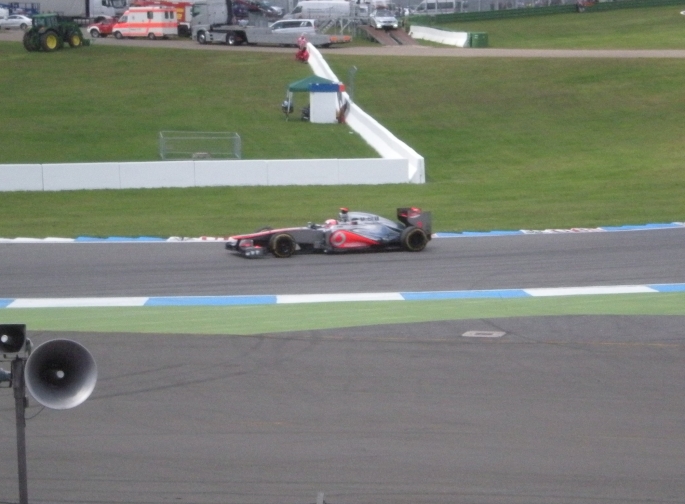 This week has been full of busy, as the woman who taught me street dance when I was 15 used to say. I haven’t even been on the computer in the evenings, believe it or not! Instead, I have been cleaning. Yes dear readers – you did read that right. Me, the world’s worst housewife, cleaning. No, I haven’t gone mad. As I’m sure you’ll have guessed, there was an ulterior motive behind it. My sister and her boyfriend are coming to stay on Wednesday – for the first time since I moved here nearly 6 years ago! I happened to casually mention to my sister that Karlsruhe is close to the Hockenheim Ring (goes to show how much attention she had paid to where I was actually living!) and suddenly she really, really wanted to visit me – on the condition that the visit could be combined with a trip to the Formula One. And so Jan and I organised tickets for said event and after months and months of counting down (on my sister’s part) the time is nearly here. Which, of course, meant the bedding for the spare room needed to be washed and the bed made, food and beer purchased, and the flat cleaned from top to bottom. Admittedly it’s only my sister, so it doesn’t really have to be spotless, but the state it was in before was really not necessary either. Jan also went and bought the equipment to attach the shelf that fell down for no reason a while ago very firmly to the wall, so we were finally able to move the CDs that have been cluttering up the bookcase back to their rightful place. Instead of just putting them on the shelf (which I would have done), Jan proceeded to arrange them in alphabetical order. This shouldn’t have surprised me really – he’s asked me several times to do the same with my books “so it’s easier to see where everything is”. So far I have resisted – I have too many books by the same author that are different sizes, and I hate seeing all the different sizes randomly mixed throughout the shelves. My books have to be arranged from tallest to shortest. It looks so much neater that way! And seeing as most of the books on the shelves are mine anyway I’ve decided I have the majority vote on this one 😉

I probably won’t have time to blog while our guests are here, but I shall be back once they leave. Hopefully with interesting tales or, failing that, at least a few pretty pictures. Right now, I shall leave you with a song by the band that we’re going to see at Das Fest on Friday. It will be interesting to see a band from almost my (sort of) home town in my adopted home!