Today, we went to see a game of wheelchair rugby.
We first heard that such a thing existed about three years ago, but until now every time we thought about going to see it, the game in Karlsruhe turned out to be on a day that we weren’t actually here. This year, things worked out, and we were able to see a Champion’s League match between Karlsruhe Rebels and Switzerland (I originally thought it was the final, but having just looked at the schedule, I see there are still two more days of games to go).

The basic aim of the game is to score points by driving over the goal line in your wheelchair. There are cones at each end of the line, which you have to drive through. The team defending aims to stop the players on the attacking team from getting to said goal line and driving over it. They can do this by bashing into the opposing team member’s wheelchair, but actual body contact is not allowed.

In the photo below, the person holding the ball has just driven over the line, scoring a goal for his team:

After a goal is scored, the ball is given to the opposing team for a throw in. That team is then in attack and has the chance to try and score a goal. The attacking team has 12 seconds in which to get the ball over the half-way line – if they don’t manage it, they lose possession. The player with the ball is allowed to hold on to it for 10 seconds at a time – after that, they either have to bounce the ball or pass it to a team mate. Fouls are penalised wither with a time out – the player who committed the foul has to sit out wither for a specified length of time or until the opposing team scores a goal (a bit like the sin bin in Rugby Union), or with a “penalty goal”, which basically means the team that was fouled against has a certain length of time to try and score a goal and, during that time, the opposing team cannot defend against them. Other rules are that only three players from the defending team at a time can be in the rectangle in front of the goal line at one time, and attacking players can only stay in that same zone for 10 seconds each.

My pictures aren’t brilliant, but I hope they’re good enough to give you an idea of what’s going on. Here’s one of a member of the Swiss team about to score a goal:

The match we saw started off quite tame – it seemed a little too easy to score a goal, and the Swiss team were clearly inferior, but after a while things picked up a bit, they figured out how to effectively defend against the Rebels and it got a lot more interesting. There was certainly more instances of wheelchairs banging into each other in a manner that reminded me of the dodgems at the funfair!

It wasn’t as violent as I’d been lead to expect from watching YouTube videos, but it was an interesting game to watch and it was quite easy to work out what was going on (definitely an advantage over ordinary rugby!)

Entry to the game cost nothing, so if I’m not busy when there’s another match in Karlsruhe I would certainly consider going along again. There are much worse ways to spend a rainy Sunday afternoon! 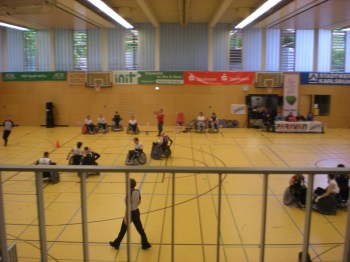