We are now over a week into the third month of this year, which is exactly the kick up the backside I need to continue with my 30 German Towns Before 30 series.
Today’s location of choice is Mainz. 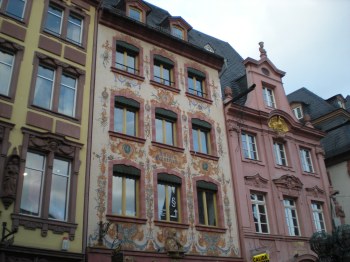 I went to Mainz with some ex-colleagues of mine from the place where I completed a year-long internship. For a while, all the southern branches of this major translation firm would meet up a couple of times and do something together, inviting ex-colleagues and (ex-)interns along as well. Sadly, the people who organized these outings have since left the company so they don’t happen any more.

On this occasion, it was the turn of the Mainz branch to organise the day, and so the rest of us converged on their town. The plan was that the locals would show us around before we all headed to the Christmas market for yummy Glühwein (this meetup being in December). I actually mentioned the trip briefly here, but now it’s time for a proper post.

Mainz is a bit of a strange place. Parts of it are really pretty, with gorgeous buildings and views of the Rhine river (not the Main, as I originally thought), but then there’s this random square full of clothes shops/office buildings that’s just awful. All concrete and steel and glass with no character whatsoever. It’s right around the corner from where the Weihnachtsmarkt was being held as well, so if you stand on that square and peer through a gap between the shopping center and some other building you can just about see the prettiness on the other side. Most bizarre. You’d think they’d have at least tried to make the shops fit in with their surroundings!

One of the first things we found on our walk was the Narrenbrunnen (Fool’s Fountain). Mainz is one of the carnival towns – along with Cologne and Düsseldorf – so of course it has to have a Narrenbrunnen – although this particular one calls itself a Fastnachtsbrunnen, Fastnacht being the word for carnival in that part of the world (in Karlsruhe I’ve most often heard it referred to as Fasching, and occasionally Fastnacht, but Karlsruhe doesn’t really do carnival).

Behind the Fastnachtsbrunnen is the Schönborner Hof – former home of the sovereign princely Schönborn family. Apparantly it now houses a “Maison de France” – an institute that aims to make French culture, language and France itself better known in Mainz. The University of Mainz also uses parts of the building. 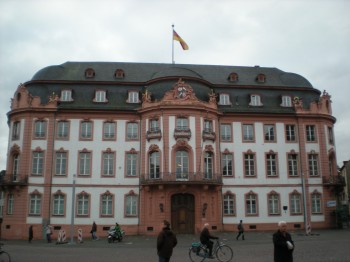 The next stop on our walk was the cathedral. It’s quite an impressive building, towering above the old town of Mainz. And inside is quite nice too. 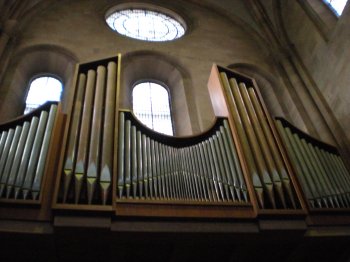 We also found this guy in there… kind of creepy.

Once the cathedral was done, it was time to head to the Christmas market for lunch and Glühwein. The Glühwein was average, but cheaper than at most other Christmas markets.

Later I went and looked in some of the clothes shops on the ugly steel and concrete square (no photos of that!) at the suggestion of another ex-intern. I didn’t buy anything though, and after a while we headed back to the Glühwein stand to join the others.

In the evening, we headed to another part of town for a meal, walking down Christmas-light adorned streets on our way.

After our meal, which took a while with such a large group (and I can’t remember where or what we ate), we had to take taxis back to the train station to avoid missing our trains home, so I didn’t get to see any more of Mainz. Not that I would have anyway – being December, it was dark by that time.

Mainz seems like an okay town, although as I mentioned it’s a bit of a weird mixture of really pretty and really, really not – mostly the fault of the second world war, I’d imagine. I also didn’t get to see as much of it as I would have liked, being with such a large group of people and having mostly been invited there for the Christmas market. I think this is a town that I might have to visit again in order to form a real opinion of it.