What with first my sister then a friend moving house, a penpal giving birth to a baby girl (yes, I have penpals) and my godson’s 2nd birthday coming up in September, I ended up stitching a few cross stitch cards over the summer. Obviously I took photos of all my stitching (wellll… apparantly not all, see next paragraph), and where better to save them for posterity than on my blog? 😉

For my sister’s new home card, I choose a bird house design that had appeared in a collection of “spring stitches” in one of my magazines. Not very imaginative (is it just me or do loads of new home cards feature bird houses?), but cute. Unfortunately, I don’t seem to have taken a photo of it… and if I did it’s gone now! In my attempt to figure out why there was no photo of this card anywhere, I managed to accidently delete all the folders on my camera’s memory card… 2 days before I was due to fly to Taiwan!! When a friend moved home a few weeks later, it occurred to me that a beehive would also make an excellent theme for a new home card! I knew I’d seen bees somewhere in one of my magazines, so I went on a search through some back issues, and was soon rewarded. This little beehive is actually part of a larger sampler that I don’t like very much – too old fashioned for my tastes! But this little picture alone is cute, and the perfect size for a card!

In June, a penpal in Germany gave birth to a baby girl. I knew she was having a girl in advance, so I stitched most of the card then spent the rest of the month waiting to find out the name. A birth announcement card was waiting for me when I returned from Vienna, so I was able to quickly finish the card and get it sent off along with the gift I had bought. I’ve blurred out the name on the photo because I don’t like to share the names of other people’s babies on my blog… even if there is zero chance of you ever working out who she is! 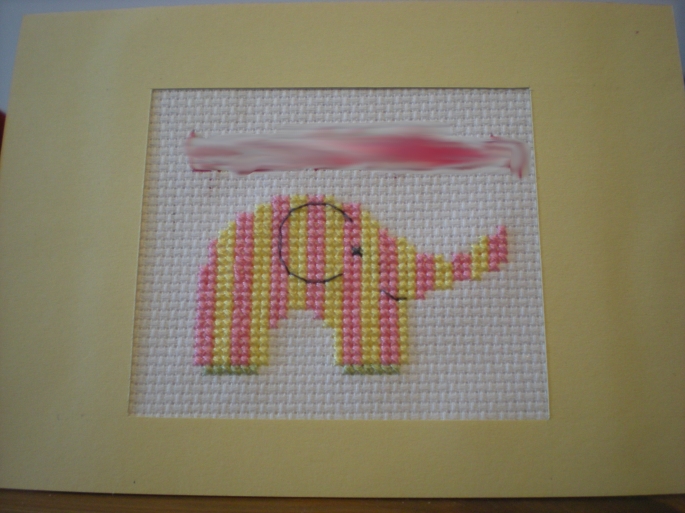 Finally, having failed to find a nice birthday card for my godson in the shops (where are all the decent kids’ birthday cards?!), I decided to stitch my own. It took me a looong time to find an image in my magazines that was suitable for a small boy… sooo many fairies and cutsie mice! But I eventually decided on a skateboarding tortoise. I haven’t actually turned this one into a card yet (that will happen when I get back from Taiwan – tomorrow, in case anyone is wondering. Assuming no Icelandic volcanoes have erupted since I sheduled this post!), but here’s a photo of the cross stitch itself:

And that’s what I’ve been stitching for other people this summer. I also mentioned in my latest photo an hour post that I’m working on something for my kitchen. I still have one more thing to stitch for that (I have a frame with four gaps), then all four little pictures will be up on the blog, so look out for that!