When I left off before, we’d reached the end of the Forgotten World Highway. From there, we drove to our B&B in New Plymouth, which was lovely by the way! I wish we could have had more than one night there. Before going out for the evening we admired the view from the window and took some photos of the birds out in the garden. We were later told that these are Indian Mynah birds. 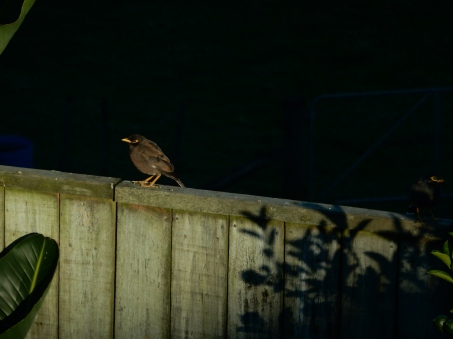 Our B&B wasn’t directly in town, so we got back in the car to go down to the coast then parked up and went for a walk.

This sculpture is called the Wind Wand:

We walked along the coastal path for a little way. It was nice to be by the sea. 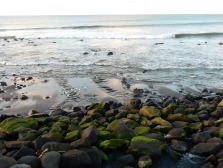 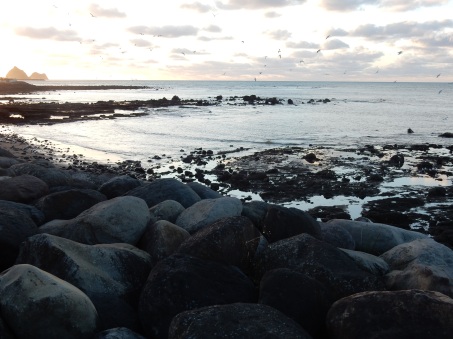 Apparently I took a lot of photos of rocks? I liked the way they looked with the sea in the background.

The sun eventually started to set, so I played around with my camera settings trying to get some good photos. I should probably know what the two rock formations/small islands are but I don’t. Sorry! *Bad blogger* 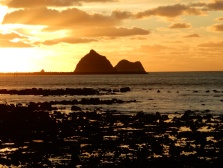 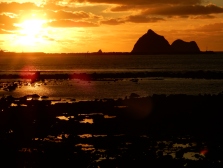 We were hungry by that stage so we headed back to a restaurant near where we parked the car. It’s called Arborio and the food we ate was delicious! We even indulged in some nice wine and had desert. We must have been feeling rich 😉 I took zero photos of said food though. Again, bad blogger.

The next morning, the sun was rising when we got up for breakfast. 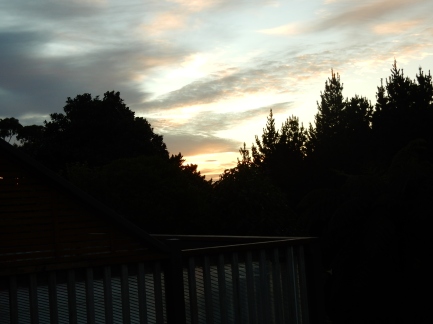 From New Plymouth we drove up to Auckland, stopping at the Waitamo Glowworm Caves on the way. I have no photos from there because you aren’t allowed to take photos in there (and I left my camera in the car so I couldn’t have sneaked any ;-)), but I can highly recommend it! There are glow work experiences of up to 3 hours(!), but we didn’t have that long so we did a 45 minute tour, which involved walking through one cave with a guide followed by a boat ride through the dark to the exit. During the boat ride, you can see all the little glow worms glowing away… like millions of stars on the roof and walls of the cave. A truly awesome experience that was over way too soon!

Again, I’m linking up for Monday Escapes, and I remind you that New Zealand was my #Take12trips destination for March (yes, I’m that far behind on posting!)