1 January was our final day in Zurich. We started 2015 by sleeping til 1.30 p.m., then eventually managed to drag ourselves out of the hotel and to the main train station, where we found a cafe for breakfast. I had a hazelnut-filled croissant (which are called Gipfeli in Swiss German!) and a far-too-sweet cinnamon latte. Then it was time for some more walking. We took a different parallel street to Bahnhofstrasse, one we’d never been down before, and eventually came to Zurich’s “other” river – the Sihl. Apparently it flows below the Hauptbahnhof (main station) and parts of the station are actually below the river! The things you learn from Wikipedia… Once we got away from the town centre, the path was slippy but it looked pretty with the river alongside and the tree branches hanging over it. 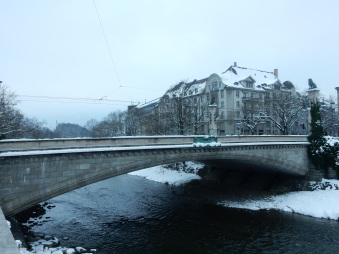 Bridge over the Sihl

After we’d walked for a while, Jan consulted the map on his phone then decided we needed to turn left if we were eventually going to end up back in town. He then proceeded to make me go up this set of steps:

I didn’t so much walk up them as haul myself up, clinging to the handrail for dear life the whole time! What looks like pretty snow had been trodden on so often that it was actually more like ice. Very, very slippy ice! At the top, we found a park area set on a hillside. All the local kids were out playing with their bobsleighs. I wish we could have borrowed one… it would have been slightly easy than walking/slipping down the frozen path!

View from the park

After leaving that park and walking down some random streets, we entered another park where we found more people sledding and another snowman. From there, we also had a view of the lake.

A street in Zurich 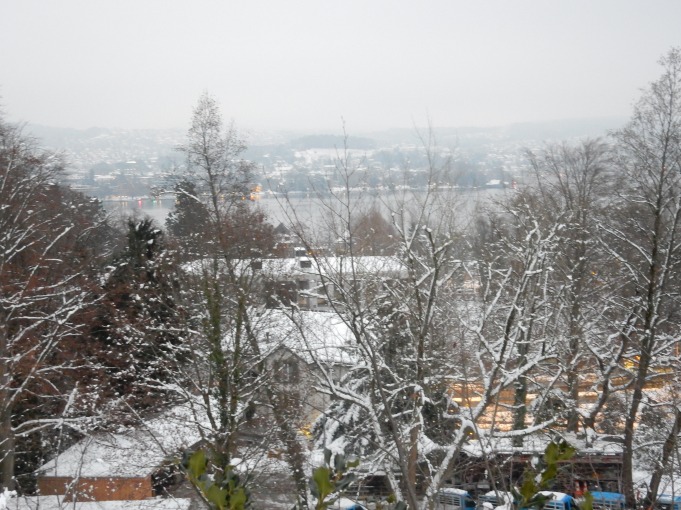 The lake is back there somewhere…

Finally, after walking for what seemed like days, we reached the lake. By this time it was dark and we were cold and hungry, but we still stopped to take a few photos of the lake. By which I mean Jan stole my camera and took pictures after witnessing me failing to get any good ones. Hmph!

After all the walking we’d done, Jan decided he wanted a hearty meal of the type served by a brew-house. The first Bierhalle we tried was closed (for future reference, lots of places in Zurich seem to close on New Year’s Day), so we headed to a place called Restaurant Johanniter. Jan chose a dark beer that was delicious! Unfortunately it was on special and the card only said “Schwarzbier” so we don’t know what it was to look out for in future. I went for the Appenzeller Quöllfrisch, which was also tasty. To eat I had vension “geschnetzeltes” – geschnetzeltes is a word for strips of meat cut in a certain way. Jan had the traditional Zürcher Geschnetzeltes, which I’m not keen on because it comes in a sauce with mushrooms. I then treated myself to some apple strudel for dessert (no picture of that because I was too busy stuffing my face 😉 )

Once we’d eaten, we headed back to the hotel to pack and relax for a while. And that was the end of our trip to Zurich. A lovely city, if fairly small. I’m sure we’ll be back… Basel to Zurich is only a little over an hour by train, which makes it pretty perfect for a day trip with visitors.

New Year’s Eve dawned bright and sunny…  which was a bit of a waste really seeing as we’d decided to spend the day at the Landesmuseum (Swiss national museum). I did take a couple of photos of the building before we went in though, luckily. They ended up being my only blue-sky photos of Zurich!

In the museum, we learned a bit about Swiss history, including their policy of being neutral during the world wars and also the fact that the final canton only gave women the right to vote in 1990! (That would be you, Appenzell Innerrhoden. Tut, tut, tut!) There was also an exhibition of Swiss furniture and a whole section on archaeology. We decided to skip the special exhibition on Christmas cribs (nativity scenes) as we were all museumed out by that time and also it was closing soon. It was nearly 5 o’clock by that time and we hadn’t eaten since breakfast so we headed into the train station to grab some soup and a sandwich from one of the cafes there. We did 90% of our eating at the train station because it was the only place that had even vaguely affordable food (bakeries have fairly normal prices… restaurant food is almost double what we would expect to pay in Germany!). We then went for a bit of a walk around, ending up by the university which is on a hill and provides a nice view over Zurich. 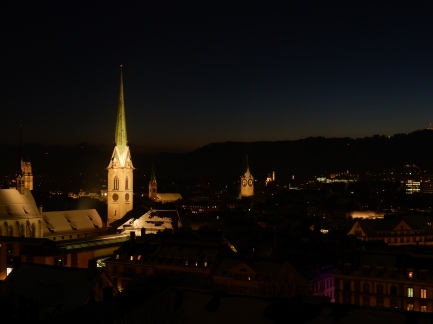 Zurich viewed from near the university 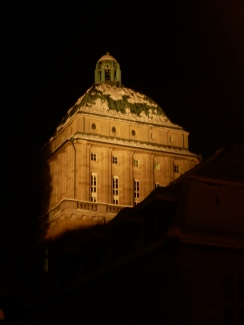 Part of a university building

Once we were back in town, we went for a quick beer then decided to head back to the hotel for a bit and chill before joining the festivities at the lakeside. We watched Pirates of the Caribbean, which Jan had somehow never seen before!

On leaving the hotel, we stopped off at Coop to buy some small bottles of Prosecco before taking the train back into town then heading down to the lake via the quieter back streets. I prefer not to have fireworks thrown at me, thank you very much! On the banks of the river itself fireworks were forbidden, which made me very happy! There were hundreds of food/drink stands lined up all along the lake, so before going to join the crowd who were waiting for the fireworks we grabbed a Glühwein and this:

That is Rösti – a Swiss speciality consisting of grated potatoes – with pieces of smoked bacon that was then covered with a generous helping of raclette cheese. Not particularly healthy but so, so good!! We then joined everyone else down by the lakeside. As twelve approached, there was a countdown and then the church bells all over the city chimed at midnight… that was the idea anyway! We couldn’t actually hear any chiming because one stall somewhere hadn’t turned off its incredibly loud music! Everybody chinked glasses (or bottles in our case… we don’t do classy), hugged, kissed and wished each other a happy New Year. Then, at 19 minutes past 12, all the lights in the city were switched off and the fireworks finally started. We got an entire 20 minutes of fireworks, set off from three boats on the lake. It was amazing! Here’s just a small selection of the photos I took:

Not the best photo, but I like it because it shows the boats

These were smiley faces before the fireworks exploded 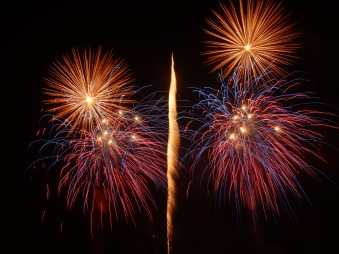 Some of the fireworks formed shapes, like hearts and smiley faces, but it was difficult to capture that on camera. You can just about make out a face (upside-down!) on one of the photos above, though.

After the fireworks, the lakeside cleared fairly quickly. I assume people wanted to get into the warm! Although it wasn’t as cold as on the previous day, there was still snow on the ground. I finished my Prosecco (which Jan had been holding for while I took photos), then we walked around for a bit looking for some interesting food to snack on. We finally chose a stall selling Indian food, where we bought some delicious samosas and pakora. It was after 1 by this time and I didn’t really feel like going into a crowded bar, so instead we headed back to the hotel and switched on the TV. Not a bad start to the New Year!