I know I’ve already posted today, but I promised I would get a picture of Mississippi Mud Pie the second up today or tomorrow, and with so many other posts planned this is the only way I’m going to get everything in. There just aren’t enough days in the week any more…

Sooo,  this one’s for you, Lady of the Cakes!

A small Mississippi Mud Pie this time, since only two of us were eating it.

I definitely won’t be adding melting marshmallows to my list of talents any time soon! No matter how much I stirred, they stuck to the bottom. I even remembered to break the giant marshmallows into small pieces this time, but it didn’t help… as soon as I turned on the heat, they all stuck together in one huge clump anyway. Then, when I transferred them to the bowl ready for mixing with the other ingredients, they started hardening again before I could bling. Pouring on boiling hot melted chocolate helped a bit, but I still ended up with marshmallow lumps in the finished pie, which isn’t supposed to happen!

This time, I decorated with pink and white Schokolinsen. Chocolate in a sugar shell… so a bit like a giant German version of Smarties… except the Linsen taste vaguely of mint, which always confuses me. I added some heart-shaped sugar decoratuins to fill out the middle. And here’s the completed pie: 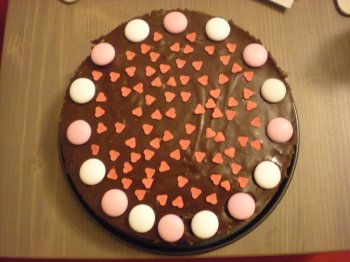 It was very tasty, but I think it will be a while before I try something that requires melting marshmallows again!